Where are the alpha opportunities in EM debt?

Why emerging-market debt and why now?

In very simple terms, emerging markets are half the world's population, half the world's GDP and more than half the incremental growth. It is also an inefficiently priced opportunity set, so less information, more noise, less facts, more opportunities for active managers who know what they're doing to uncover interesting ideas and avoid future disaster. So emerging-market debt should be considered.

What are the divergences between EM debt and equity? Are investors always aware of these differences?

Even at the company level, we don't see much overlap. Equities that are being issued tend to be more growth-oriented companies — technology or consumer-led — and those industries tend not to carry a lot of debt, nor should they.

Then you have large industrial companies, commodity producers and state-owned enterprises. Those tend to be more your debt issuers. So, in fact, there's not a lot of overlap of issuer or country.

They tend to be exporters into the developed world. They always need capital in one form or another, debt or equity, and so in this environment of low global yields but improving growth, and a bit more readiness from developed markets to take on risk, money tends to flow to emerging countries.

Defaults of corporate EM debt are on track to fall significantly from 2016 and be below 2015 levels as well. Roughly a quarter of the defaults this year are from Chinese companies, while there have been zero from Brazil. What's behind this big decli

Defaults ultimately happen because of liquidity, not necessarily just solvency, and in an environment of very low and declining interest rates, the access to capital has been easier. So you're not going to default because there are a lot people around the world who will lend you more money to refinance your debts. You can actually lower your interest costs in some cases.

On the commodity side, the commodity collapse was very severe but it was dampened by both very low interest rates and the fact that oil prices recovered relatively quickly. If those low prices had persisted for a longer period of time, you would have seen many more defaults.

At T. Rowe, we don't allocate by region. We allocate from the bottom-up country idea or the issuer idea.

But generically, Latin America still holds more opportunity. That's mostly because they were hit harder by the commodity downturn. If you just think about it purely as a rebound, that's where the gains have been of late.

Somewhat corollary to that is Europe, which we find is relatively expensive, and that's because the ECB's quantitative easing has polluted the pricing of the periphery of Europe. So Spain and Italy are more expensive than they should be. That has filtered into Hungary and Poland. Debt of these countries looks expensive because money has flowed out of the core into periphery and into Central Europe.

There are a handful of countries in Africa that we like but there are many frontier-type of countries that are now expensive. The distressed opportunity is Venezuela. It's very challenging, but long-term Venezuela will be a very interesting restructuring and recovery story, and a source of alpha. 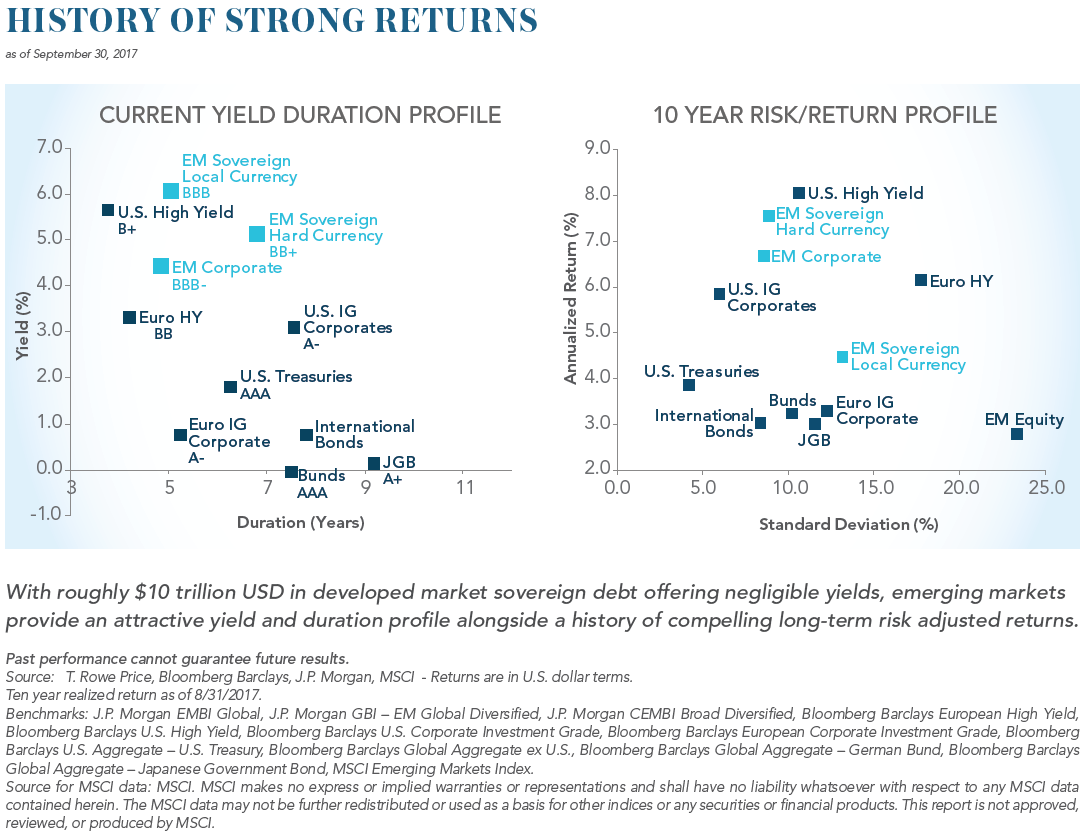 What about active vs. passive approaches?

There are a couple of issues with passive. If it's truly passive and tracks a benchmark, that's a worry — a debt index is kind of a record of failure. The more you borrow, the bigger you are in the benchmark. The passive strategy's going to allocate more to an increasing borrower, so that's probably not very bright.

The other thing is that passive, such as via an ETF, inherently requires liquidity. Emerging has lots of excitement to it and lots of good features. Liquidity isn't one of them.

I don't think the ETF business has really been tested in an emerging context. The last time we had a big sell-off in emerging markets, ETFs were nonexistent or a very small share of the market.

We're an active manager, so none of those opinions should surprise you. But the combination of illiquidity and having a blind allocation to a benchmark that's based on leverage is probably not wise.

Still, EM-debt ETFs continue to attract funds. Are institutional investors using these or is it mainly the adviser/retail side?

I would speculate it can't be just pure retail. I think there are advisers using it and maybe even institutional accounts trying to make a quick allocation, almost like a top-down macro or beta call, rather than building a portfolio from the bottom up.

Why do you take a bottom-up approach rather than top down?

Fundamentals ultimately matter. In the short term, a top-down beta call makes you money, but in the long term, monitoring the fundamentals, having the proprietary research process and staying close to the country's or issuer's fundamentals are more durable.

Eventually the market recognizes that a country's debt is declining. Its [foreign exchange] reserves are improving. Governance is getting better. The market will re-rate that country sometimes before, sometimes after the rating agencies upgrade it.

And monitoring the fundamentals is important for the downside, too. You get out of a deteriorating situation before the rating agencies do, before the sell-off occurs, and that's the value of active management. And that goes hand in hand with bottom-up research.

What about the ethical risks encountered when investing in EM debt? How do you counter critics who say holding the debt of countries like Venezuela makes investors complicit in the activities of the ruling regime?

We expect one day to have a better regime in power in Venezuela and to be able to negotiate some sort of debt restructuring and debt reprofiling with a new administration.

Last year, we saw some yield-starved asset owners pile into EM debt. Is that continuing and is that a viable strategy? In other words, is it a one-to-one correlation?

It broadly will continue. It needs to be justified by fundamentals getting better, which they are, in terms of stabilization of commodity prices and growth.

Even in places like Brazil, where you're seeing a recovery of growth, the fundamentals need to justify the incremental flows. But we still see a better yield opportunity there than in the U.S., Japan or Europe.

Institutional investors still need income, and if anything, the rally in equities has probably started to trigger some, [with investors saying] 'Let's rebalance our risk profile out of equities into fixed income.'

Let's talk about the central role currency plays in EM debt investing. Should investors hedge currency risk? What is your view on currency and how do you implement this view?

I manage a hard currency strategy. Ninety, 95% of the bonds at any point in time in my portfolio are actually dollar-denominated.

I tactically invest in local markets in the local currency government bonds when it makes sense. When is that? That is typically when the country has had an increase in their inflation rate where the central bank has had to raise rates, and now inflation is under control and the central bank can start cutting rates. Or if you have a growth downturn like we had in the U.S., the central banks will become very dovish and start cutting interest rates. You can get some capital appreciation from owning local bonds as rates are cut.

Sometimes you have to take everything as a package. If hedging the local bond is expensive, you need to take the currency and the local rates. Other times it's relatively cheap to hedge the currency. We generally separate the decisions and analyze them separately, and either hedge or sometimes hedge with a proxy.

I'll use the example again of Brazil. We don't think the currency's overvalued. Commodities have stabilized and we like their bonds. Their currency's okay, but to de-amplify the risk to a dollar-based investor owning that currency, we hedge by selling, let's say, the Australian dollar or the Chilean peso, something that's correlated but isn't as expensive to hedge as Brazil itself would be. To be clear, if investors are buying dollar-denominated bonds like those that I manage, they're not taking direct FX risk. There are nuances though.

If a country has its currency depreciate massively for whatever reason, there are credit implications. So you're not immune to FX weakness when buying dollar-denominated bonds, but you don't take the entire hit like a local bond would.

It does offer some diversification — to new issuers, new countries, maybe different business cycles. It depends on a pension fund's existing allocation. First and foremost, it is currencies that give you diversification. We're using fixed-interest dollar-denominated securities with credit risk, so diversification is not a huge part of the argument. It's the extra income and the opportunity for alpha by finding countries that are improving and getting their spread compression, which generates capital appreciation. We've generated significant outperformance vs. core U.S. bonds for years. We're probably a higher source of income even compared to U.S. high yield. And for the reasons I've mentioned, bottom up is the way we invest. ■

Important Information: For investment professionals only. Not for further distribution.

The material does not constitute a distribution, an offer, an invitation, a personal or general recommendation, or a solicitation to sell or buy any securities in any jurisdiction or to conduct any partic­ular investment activity. The material has not been reviewed by any regulatory authority in any jurisdiction. Information and opinions presented have been obtained or derived from sources believed to be reliable and current; however, we cannot guarantee the sources' accuracy or completeness. There is no guarantee that any forecasts made will come to pass. The views contained herein are as of (date), as noted on the material and are subject to change without notice; these views may differ from those of other T. Rowe Price group companies and/or associates. Under no circumstances should the material, in whole or in part, be copied or redistributed without consent from T. Rowe Price. The material is not intended for use by persons in jurisdictions which prohibit or restrict the distribution of the material and in certain countries the material is provided upon specific request. It is not intended for distribution to retail investors in any jurisdiction.

CO113023118.PDF >
sponsored content
Events
Advertisement
White Papers
Looking for a better hedge
China’s Recovery Shows Positive Signals for Long-Term Investors
Is the time up for US equities’ leadership?
COVID-19: potential impact on the global economy and gold performance
The Economic And Market Effects Of The Pandemic
Add the Polen Score to Your Statistical Toolkit
View More
Sponsored Content
Partner Content
China’s Recovery Shows Positive Signals for Long-Term Investors
Risk Mitigation Strategies: How to Navigate the Coronavirus Storm
Will the pandemic reverse the active-to-passive movement?
Trend following in the time of COVID-19
Emerging Markets: Has the Coronavirus Changed the Game?
Volatile Markets Highlight the Importance of Thinking Long Term
View More