DC consultants said they weren't surprised by the gains in passive domestic equity assets, noting plan sponsors and participants are embracing index funds for reasons that include disappointment with active managers, efforts to reduce fees and strategies of adding a passive equity component to complement an active equity offering.

The Department of Labor's rules on fee transparency plus fee-related lawsuits brought under the Employee Retirement Income Security Act have played a role in sponsors' actions, too, said Douglas M. Balsam, principal and director of institutional consulting for DiMeo Schneider & Associates LLC, Chicago.

"There's a greater feeling of comfort for the fiduciaries" when offering index funds, said Mr. Balsam, adding that sponsors are more willing to terminate an active manager that has struggled for several years to outperform benchmarks. Actively managed domestic equity assets fell by 2% to $1.32 trillion last year, according to the P&I survey.

A bit of a surprise

Consultants were somewhat surprised by the P&I survey's report of a big gain in passive domestic fixed-income assets given the low-interest-rate environment.

"Our clients have a greater diversity of fixed income," said Mike Volo, a senior partner, based in Wellesley, Mass., at Cammack Retirement Group. "They are moving to inflation-protected securities and high yield. That's where we see clients' flows moving."

Although Mr. Volo expressed surprise at the gain in passive domestic fixed-income assets, he added that many participants will view such an investment as a "safe option."

Mr. Balsam surmised that the increase in domestic fixed-income AUM reflected sponsors' efforts to add a passive choice to an active one in their investment lineups.

"For most plans, we see their starting ​ point with an active fixed-income manager," he said. "What is being added more recently is a passive option to complement the active option."

"I don't see much in the DC setting," said Mr. Balsam, referring to international bond options. "International markets have been out of favor for a long time," added Mr. Schmidt. "Sponsors aren't focused on international fixed income."

In recent years, Mr. Schmidt said, "there haven't been a lot of good choices in international equity compared to domestic equity."

Consultants also noted their experience matches P&I's findings among investment vehicles in which AUM for pooled/commingled funds and separate accounts were growing at a faster rate than for mutual funds. But mutual funds still account for most of the DC assets in the survey.

Predicting more plans will seek collective trusts and separate accounts, Mr. Volo said the trend is "clearly driven by a focus on fees."

Mr. Balsam said more large and midsize plans are offering collective trusts, adding that "the trend will continue." Greater use of collective trusts will be enhanced by providers lowering the minimum amounts in sponsors' plans that would make them eligible to use them, Mr. Balsam added.

The money manager with the next largest number of first-place asset categories was Nuveen, formerly listed as TIAA Global Asset Management, New York, which led in 403(b) assets, pooled/commingled vehicles, active domestic fixed income and real estate equity. BlackRock Inc., New York, which placed second in total DC assets with $692.3 billion, was the leader in the separate account and 401(a) asset categories.

Growth of defined contribution assets
Assets are in trillions as of Dec. 31, 2016. 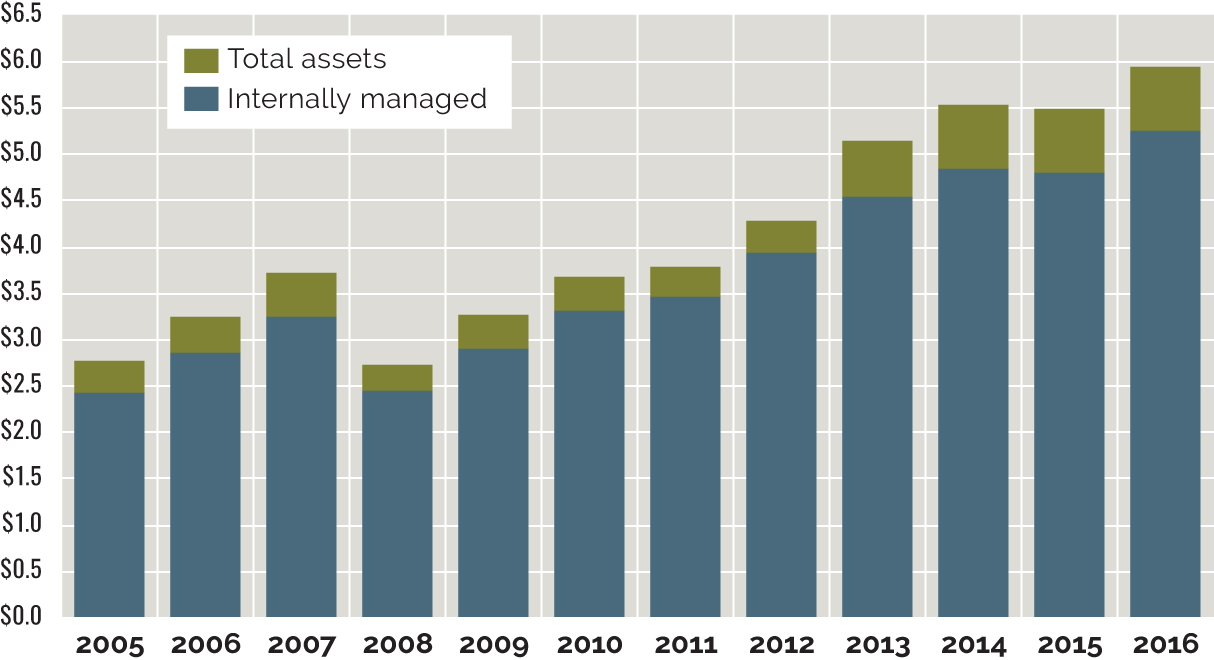 DC plan retirees will have options, but education needed

Commentary: Debunking some of the biggest investment myths