Evidence suggests behavioral biases creep into the expectations of even the most sophisticated investors — in this case Wall Street analysts. Their influence on stock prices offers a potential source of alpha; if investors can predict how behavioral biases will shape a Wall Street analyst's estimates, investors might capture excess returns as the market responds to analyst expectations.

Wall Street analysts' susceptibility to behavioral biases is significant because of their influence on stock prices. Research indicates their opinions — transparent in the form of publicly available earnings estimates — are one of the single greatest company-specific determinants of stock price movement.

We've measured the average stock price reaction to an analyst's earnings estimate revision for every revision since 2003: A single revision has an average 35-basis-point impact on a stock's price.

The influence Wall Street analysts have on stock prices commands greater appreciation when compared with actual earnings results, another frequent driver of stock returns. Figure 1 compares the average stock performance of companies that reported the top decile of earnings surprises in the last 20 years to the stock performance of companies that experienced the top decile of security analyst earnings revisions over the same period.

Not surprisingly, the stock price moves when a company reports better-than-expected earnings results; but that performance pales in comparison to the reaction when stocks receive numerous earnings revisions from Wall Street analysts. 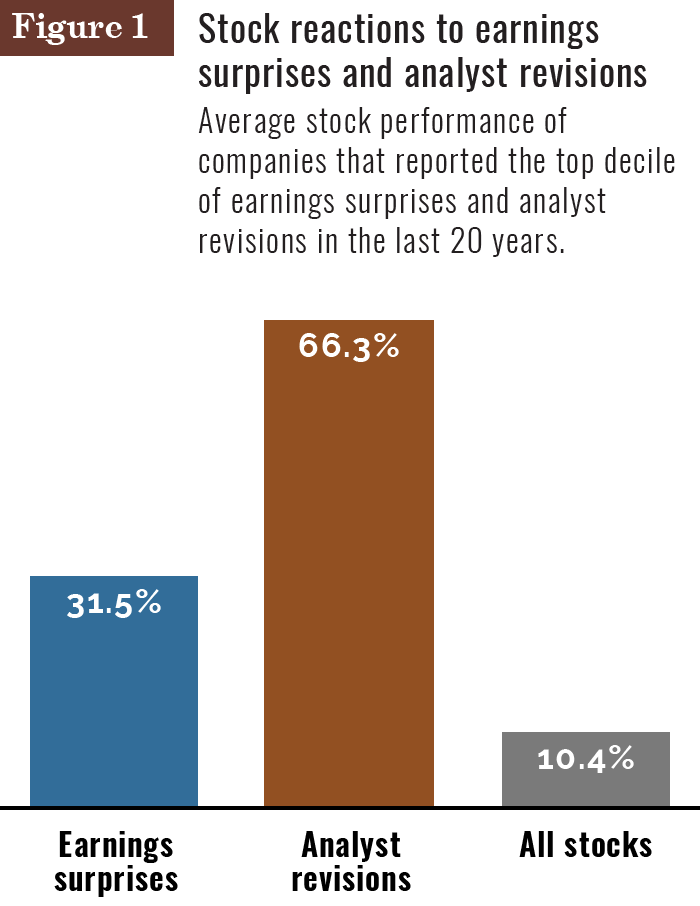 Analysts are some of the most intelligent people in an industry long on Ph.D.s, MBAs, CFAs and other impressive designations. But even the experts are subject to behavioral biases. That is because they are asked to do an impossible job that doesn't fit well within the confines of human decision-making. The analyst must consider hundreds of potential variables, assign a range of probabilities to each one and then combine each variable to model a company's profits. The task is complex, and fraught with unknowable and path-critical dependencies.

As with all humans, analysts succumb to the common heuristics professed by behavioral psychologists: information overload, overconfidence, loss aversion, anchoring, familiarity bias and herding, to name a few.

That an analyst would fall prey to behavioral biases might seem far-fetched. Proof lies in the serial correlation of their estimates. If behavioral biases don't influence analysts, one would not expect estimate changes from one period to be statistically correlated with changes in a subsequent period. Rather, the estimate revisions would follow a random walk; analysts are just as likely to receive new information that would lower the next estimate as they are to receive information that would raise it.

Indeed, Wall Street analysts do incorporate new, important data into their analysis. If, for example oil prices sink, analysts will lower earnings estimates of an energy exploration and production company accordingly. But over longer time periods, a pattern of serial correlation develops in the estimates of a large portion of companies.

Our research observed the earnings forecasts of every Russell 1000 stock over the four-year period ended Nov. 30. Seventy-four percent of those companies exhibited positive serial correlation in behavior, and for nearly half of those companies, the degree of correlations in their earnings forecasts was high enough that we can say with 95% confidence the results were not due to random variation.

Do behavioral biases present a source of alpha?

Even though analysts' behavioral biases often lead to significant predictability (serial correlation) of their future forecasts, the market does a poor job of pricing in how those earnings estimates will evolve. Figure 2 demonstrates this inefficiency. 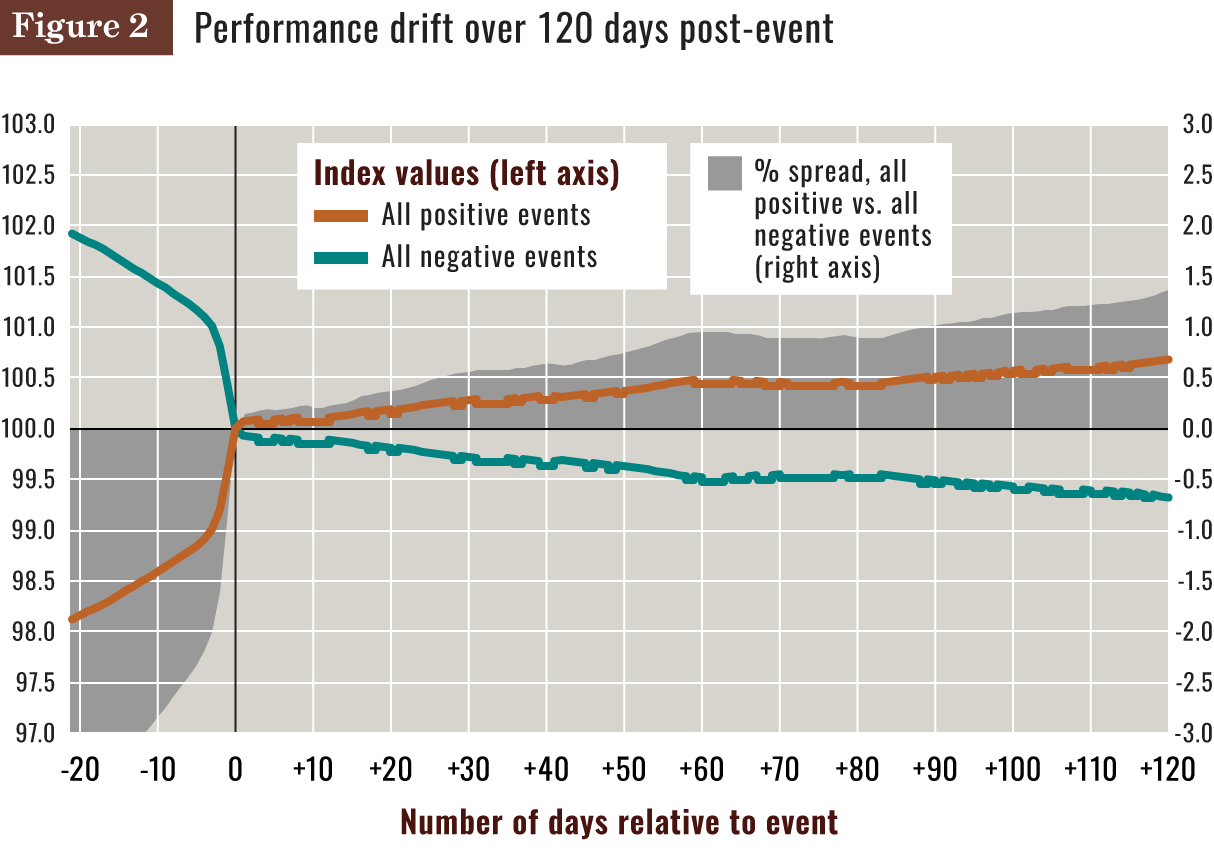 The chart encapsulates the persistent drift in stock prices following the occurrence of a significant analyst "behavior event." Over the seven-plus years from January 2010 through March 2017, we identified all the days in which 10% of analysts covering a Russell 1000 stock revised earnings forecasts up or down. We then examined the average sector-relative price changes of all positive and negative behavior stocks over the 20 days prior and the 120 days subsequent to the day of the behavioral event. The gray area on the chart reflects the cumulative percent spread between stocks that experience positive behavior events and those that experience significant analyst downgrades. As expected, stocks experienced a notable rise or fall the day the positive or negative behavioral event occurs. This is the normal response to a positive or negative analyst revision and again demonstrates Wall Street analysts' influence on stock prices.

But the drift upward in the days following a positive behavioral event (and downward after a negative event) demonstrates the serial correlation inherent in analysts' behavior, and the market's failure to anticipate it. After one positive behavioral event, there is a tendency for more positive forecast changes to follow as individual analysts researching the same security exhibit classical herding characteristics and the group's estimates gravitate in the same direction. Investors appear to view each following revision as an uncorrelated event, however, driving the stock higher (or lower) each time another positive (or negative) revision takes place.

While the substantial portion of stocks exhibiting serial correlation in their estimates — and the market's inability to account for it — creates an opportunity to add alpha, tapping into behavioral science remains an unconventional approach to investing.

Most active equity managers instead create their own forecasts around a company's earnings and use those models to find mispriced stocks. This method has produced mixed results at best, due in part to the uncertainty inherent in projecting a company's future earnings. A better approach might be to tip the cap to uncertainty and acknowledge what investors do in the face of it.

John Riddle is co-chief investment officer at 361 Capital LLC, Denver. This content represents the views of the author. It was submitted and edited under P&I guidelines, but is not a product of P&I's editorial team.

Investors see innovation as way out of limbo