Risk management and the U.S. economy

The risk-return trade-off is a critical decision every investor must face when deciding how and where to allocate capital. An investor seeking higher returns must be willing to assume higher levels of uncertainty or risk, including a potential loss of capital. If investors will not accept a higher level of uncertainty or risk, they must be willing to accept lower rates of return.

Unfortunately, this simple concept is misunderstood by many in Washington and by those responsible for fiscal, monetary and regulatory policy. As the U.S. continues with its slowest economic growth cycle in history, much of the cause can be traced back to policy choices that discourage or simply prevent the nation (investors, consumers and producers) from engaging in economic risk-taking or accepting uncertainty. Basic economic risk taking includes starting a new business, seeking funding, launching a product or investing in research and development. All should be encouraged through valid economic policies. As the chart shows, with each decade of the post World War II era, not only has U.S. growth been decelerating but the level of risk-taking has been declining as well. 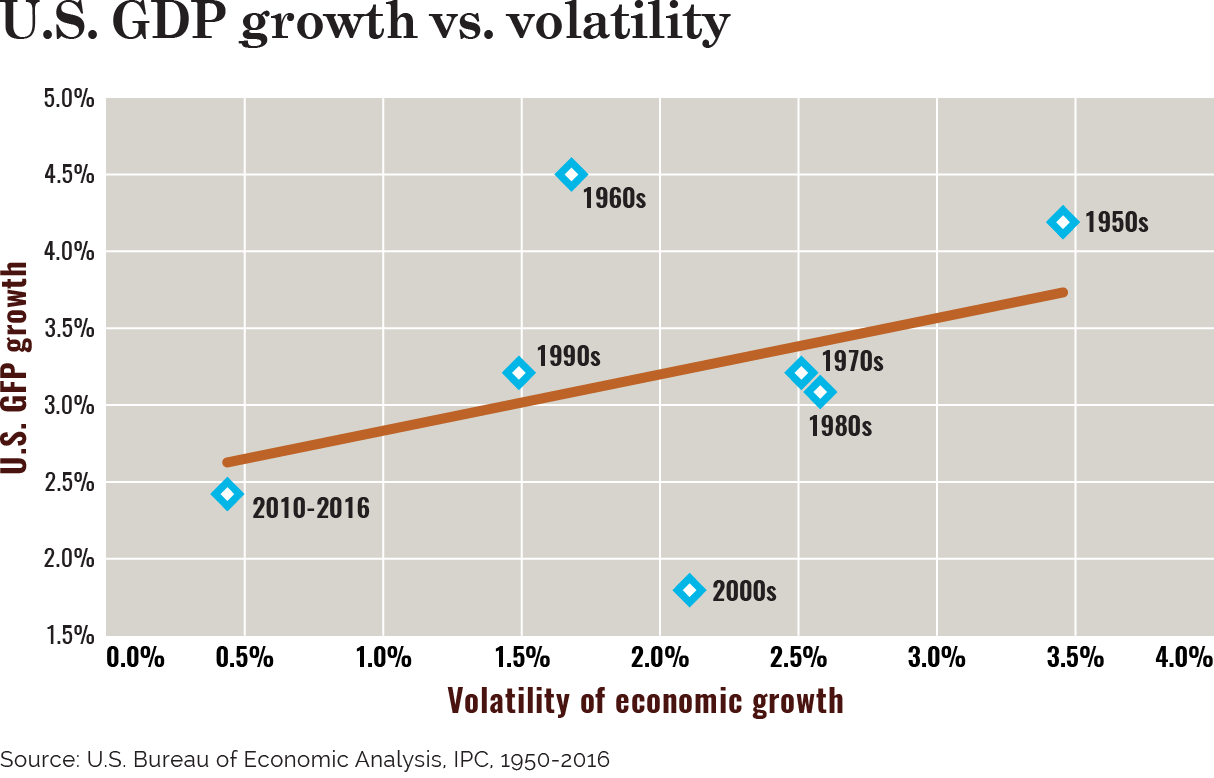 Certainly, natural causes are part of the growth slow down. Slower growth in a nation's labor force will result in slower growth of output and production. Economic growth is simply the number of hours worked times output per hour. If 100 workers each produce one widget per year, production (gross domestic product) equals 100. If three workers are added to the labor force, production (GDP) will increase by 3%. If one worker withdraws, production will decrease by 1%. Age can also affect risk tolerance, as individuals generally assume less risk as they age. But the median age of the U.S. population at 38 years is still young, although older than the median age near 30 years that held from the 1950s through the early 1980s.

Net of natural causes, the remaining reasons for lower growth are self-imposed and are largely a function of the U.S. actively lowering its risk profile — accomplished primarily through regulatory, monetary and fiscal policies that discourage or penalize risk taking. In the regulatory sphere, Congress and federal agencies have created thousands of rules and regulations that impact, mitigate or, in the worst cases, punish economic risk taking and lower productivity. From the 2002 Sarbanes-Oxley Act to the 2,300-page Dodd-Frank Act and its 800-page Volcker rule offspring to the more than 1,000-page Affordable Care Act to the Clean Air Act — most policy and regulation have added complexity to activities of consumers and corporations alike. According to an analysis by Wolters Kluwer, the 75,000-page official reference manual for the nation's tax code has grown by close to 100% since the early 1990s — a rate greater than the economic growth rate. Additionally, thousands of additional rules, notice reviews, memorandums, bulletins and working papers enacted by the federal agencies only add to the proliferation of risk management rules surrounding economic activity.

If a corporation with 100 workers adds three additional workers but all work in compliance or regulation, net production will not increase because none of the new employees contributes to output. Worse, if those employees, in the name of risk management, create or enforce rules that mitigate or reduce output, the firm's production will decline. More workers and less output per hour drive productivity lower; productivity is a key driver of economic growth. This means revenues fall and expenses rise, a lose-lose proposition, bad for shareholders and challenging for management as they seek ways to offset lower returns.

In the monetary and banking sphere, the Federal Reserve, through its micromanagement of short- and long-term interest rates, bank balance sheets, stress tests, dividend policies, etc., has reduced the ability of financial firms to assume risk or take chances innovating. The risk reduction or penalty is worse for smaller institutions that have greater difficulty affording costs associated with certain regulations. Consequences include lenders assuming less risk when granting loans or pursuing policies that meet regulatory requirements at the expense of economic validity.

In the fiscal and tax policy sphere, the risk mitigation needs to be viewed in a global context. Because investment capital travels freely across most borders, relative returns matter. The U.S., which taxes corporate profits at near the highest marginal rate in the world, makes risk-taking less desirable since that reduces the rate of return on capital. If the after-tax returns are not high enough to compensate for the associated uncertainty, risk appetite decreases. The more than $2 trillion of corporate cash being hoarded overseas, largely because of the U.S. worldwide tax system, represents a staggering level of non-risk-taking resulting in lost U.S. growth.

Worse, the promotion of risk management, adverse limits on economic activity or inconsistent agency regulations can lead to a reduction in economic freedoms. Economic freedoms are a critical component of economic growth and drive innovation, investment, research and other factors that increase productivity. Relative to its past, the U.S. is less economically free. According to the 2017 Index of Economic Freedoms, published by the Heritage Foundation, only five countries meet its definition of economically free. The U.S. is not one of them. Today, the U.S. along with 28 other countries is scored as "mostly free." However, its score is the lowest since 1995 and it has fallen to rank 17th globally. The decline is largely because of reductions in labor freedom and property rights.

Overall, a greater focus on risk management combined with fewer economic freedoms leads to lower economic growth. From an investor perspective, the U.S. used to be managed as a competitive growth fund. Today it is managed as a conservative balanced fund. There is nothing wrong with changing risk profiles; it is perfectly valid. However, changing risk profiles and not acknowledging the true costs and requisite trade-offs in economic growth is unfair to all involved.

Arun Kaul is president and chief investment officer of Independent Portfolio Consultants Inc., Boca Raton, Fla. This article represents the views of the author. It was submitted and edited under Pensions & Investments guidelines, but is not a product of P&I's editorial team.