Investors ready to move energy back from dark

But concerns on price keeping many from making any major play

Sophie Baker
Reprints Print
Alex Griffiths
Adam Laird knows investors are looking hard at oil again but are waiting for prices to firm up before making a jump back into the sector.

Oil is back on the agenda for money managers and investors around the globe, with concerns over a glut, the stubbornly low price and OPEC decisions bringing the slippery stuff back into executives' sights.

These factors mean some managers are making strategic allocations to certain energy companies, while others are still waiting for the right opportunities to re-enter the market.

"From the conversations we've been having with investors, oil and energy are on the radar, but anecdotally we hear investors want to see some action (in particular around the oil price) before they move," said Adam Laird, London-based head of exchange-traded funds strategy, Northern Europe, for Lyxor ETF. "Oil has been hovering around $50 for the last year and has been slipping back. Energy can be a painful trade and investors don't want to be first to move."

"The market is really worried that OPEC cuts are not working" and the pace at which inventories will normalize, said Richard Robinson, investment manager at Ashburton ​ Investments in Jersey. He also cited the exclusion of Libya and Nigeria from OPEC's recent supply cuts as a focus: "When you've got such high inventory levels, you're very susceptible to scare stories."

However, Mr. Robinson expects the second half of 2017 to be better when it comes to inventories, with the seasonality of oil demand kicking in. "Typically you demand between 1.8 million to 2.2 million barrels more in the second half than the first — that should put more pressure on (oil inventories) and we should get a significant inventory draw over the second half of the year," he said.

Mr. Robinson said his energy fund "has an overall oil price sensitivity to it.'' If, for example, executives believe oil will move positively over the next six to 12 months, they move into stocks with a high degree of sensitivity to the oil price, such as service companies and drillers. If they think prices will move negatively, they move further downstream — into shipping stocks, refiners and integrated oil companies.

"Although we have reduced that slightly, from 1.68 to 1.5, we remain bullish for the second half and I will look to pick that (sensitivity) up as I see signs that sentiment is changing," he said. A value of 1 means the fund has the same sensitivity to the oil price as the benchmark.

Mr. Robinson said questions remain over the supply from Libya and Nigeria, and whether Organization of Petroleum Exporting Countries — or, most notably, Saudi Arabia — will compensate for that by reducing supply. "If they don't, it could be a bearish signal and I would change tack," he said.

Mr. Robinson also thinks 2018 will give a "more constructive picture" when it comes to oil, with inventories stabilized at a level that is a lot closer to normal.

Koen Straetmans, senior strategist, multiasset at NN Investment Partners in The Hague, Netherlands, said executives at the firm have made a number of recent moves based on oil. The most recent was to take a small overweight position. Prior to the May 25 OPEC meeting, when further production cuts were extended, executives had closed an earlier overweight position from early May. It had previously moved underweight in mid-February, closing that position in March.

Mr. Straetmans said it has a lot to do with seasonality. "What I do see is that at least oil demand in aggregate is improving recently — of course that's a positive sign. And of course, on the supply side we have the extension of the (reduced production) deal, and negative market reaction (as) market participants were expecting more," in terms of either deeper cuts or fewer exempted countries.

"Given seasonality and the extent of compliance (with the cuts), we think the next couple of weeks (will see) further drops in U.S. oil inventories — from that perspective we still think there is upside potential."

J.P. Morgan Asset Management's Ebele Kemery, a New York-based portfolio manager and head of energy investing, said she's receiving calls from clients regarding oil and what exposure means for portfolios. "We believe that oil is challenged with the bad sentiment we have, but it's challenged (also) because of the view of what prices will look like in the future."

Expectation had been for a deficit going into the summer, she said, but "those views have been quickly reassessed as the OPEC deal has shown to not be sufficient." On top of that, shale producers "have stepped in to fill that void much faster than anticipated," she added.

What concerns Ms. Kemery is OPEC's exit strategy. "Without knowing what that is (the future price of oil) seems murky — it is hard to get seriously bullish (about) oil" for 2018, she said.

OPEC's intervention was also highlighted by Man GLG's Tiger Craft, portfolio manager and energy specialist in London. "Since the OPEC cuts, we have seen a number of offsetting trends we think OPEC largely underestimated. Firstly, two large countries that were omitted from the cuts have increased production substantially, which caught a lot of people off guard," he said, referring to Libya and Nigeria.

At the same time U.S. shale production increased more rapidly than OPEC had anticipated. "Both of those factors are contributing to throw a bit of a wrench in OPEC's strategy, and the rebalancing process."

The firm tracks global oil inventories and has not seen any noticeable inventory draws this year in the high-frequency weekly data. He said it feels like something needs to happen to encourage shale producers to slow their activity, and said it is not inconceivable to see oil dip below $40 a barrel in the next three to six months to help this happen.

The reason the oil situation matters so much is that "the last time we had a global economic expansion we got oil at $100, $150, and that really chopped off global growth," said Pierre-Henri Flamand, chief investment officer at Man GLG in London.

The high oil price was probably a major factor in the 2008 financial crisis because "it forced the central banks to hike rates so high it killed the subprime market in the U.S. If we're in a situation where we have a global recovery, but oil is unable to price that recovery because of factors specific to the sector, it could actually be a positive factor globally for asset prices. So it is important to keep an eye on oil vs. what we see in the economic cycle, because we believe it could help the cycle extend if it stays as it is," while inflation data remains weak despite good PMIs and other factors, he said.

While oil was has made a comeback onto the agenda for money managers, they are dealing with their concerns and oil-related problems in different ways from before.

One thing that has changed is the way executives assess companies in the sector.

"Something in the past that used to be very favorable was looking ahead to valuations," said J.P. Morgan's Ms. Kemery. This time, executives are looking at the balance sheets of companies.

She said trading based on a company that looks cheaper or richer was tough, "as the market got valuations wrong." But looking at strong balance sheets meant outperformance in some cases. "Going forward I think that's the way to play this type of market," she said.

Ms. Kemery said geopolitics also plays into the oil issue, and that is difficult to price in. She uses a set of scores when she looks at a potential investment, covering supply, demand, geopolitics and technical, and applies a weighting to each. "I have diminished the impact of geopolitics greatly. Even though (it is) screamingly high (in the metric), I've made the decision that this is not what the market is focusing on. The supply is more (of a focus), the market is hyperfocused on that. It takes a higher weighting," said Ms. Kemery.

However, opportunities exist, with some sectors doing well. Ms. Kemery highlighted natural gas, the integrated oil and gas industry, and other areas as offering potential.n 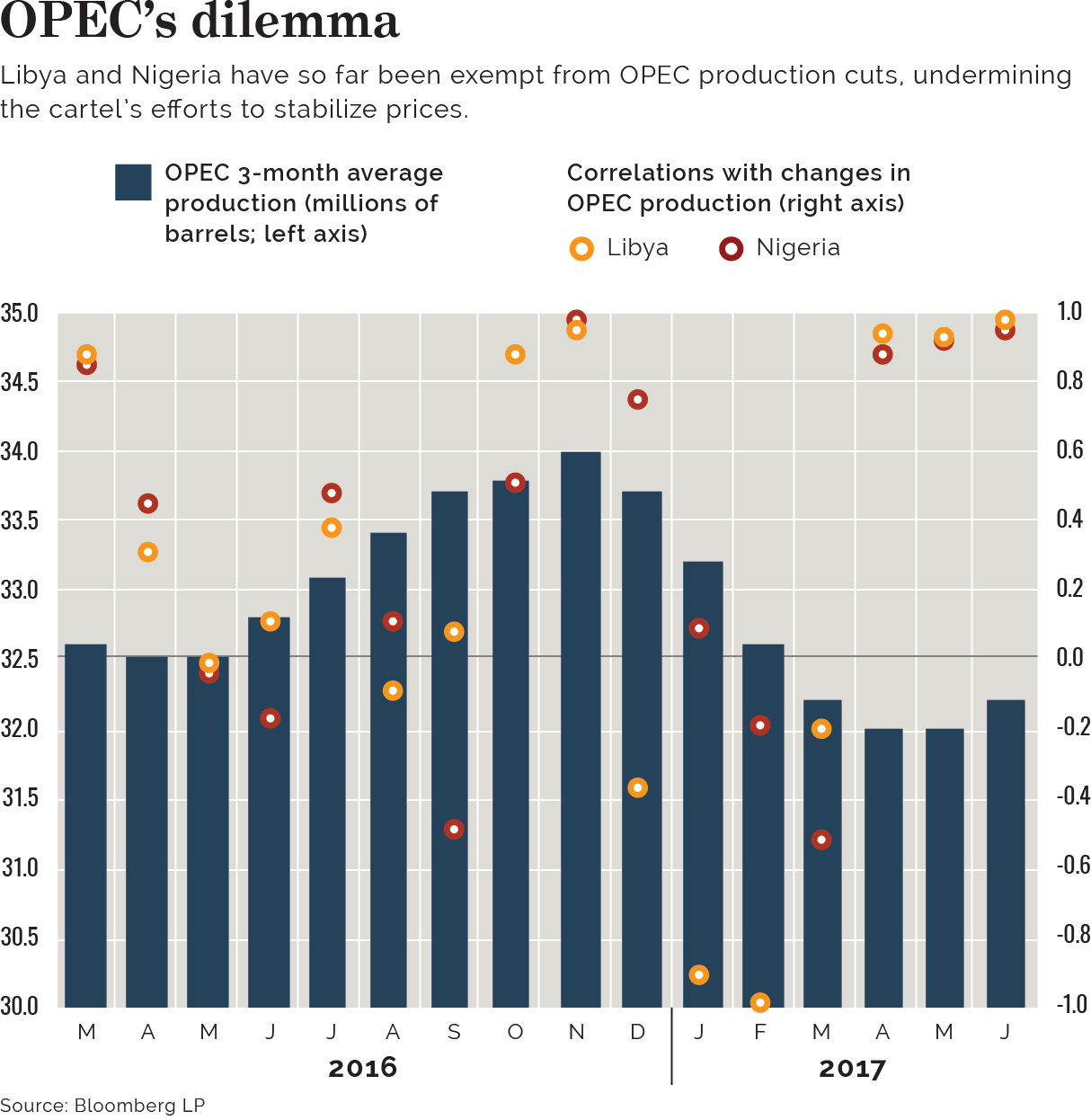 The delicate balance of investing in energy

Commentary: Investing in oil for now, the next year and the next decade