There is a good chance U.S. investors have, consciously or unintentionally, allowed home-country bias to creep into their portfolios.

Since 2009, U.S. stocks have outperformed their international peers accompanied by a historic rally in the U.S. dollar. When this trend ends is unpredictable, but nothing is everlasting. Portfolios tilted toward the U.S. as a result of nearly a decade's appreciation are particularly vulnerable to reversal. It is time to look overseas.

There have been divergent paths among U.S. and non-U.S. companies since the Great Recession and one of the more impressive things to observe over time, cycle after cycle, is the long-run resilience of corporate America. In what feels like just yesterday, businesses were mired in the Great Recession, in the midst of a historic decline in earnings. The S&P 500 index's earnings declined nearly 40% during the Great Recession; in sharp contrast, present day earnings have surpassed the 2007 peak and again converged on the long-run trend line. 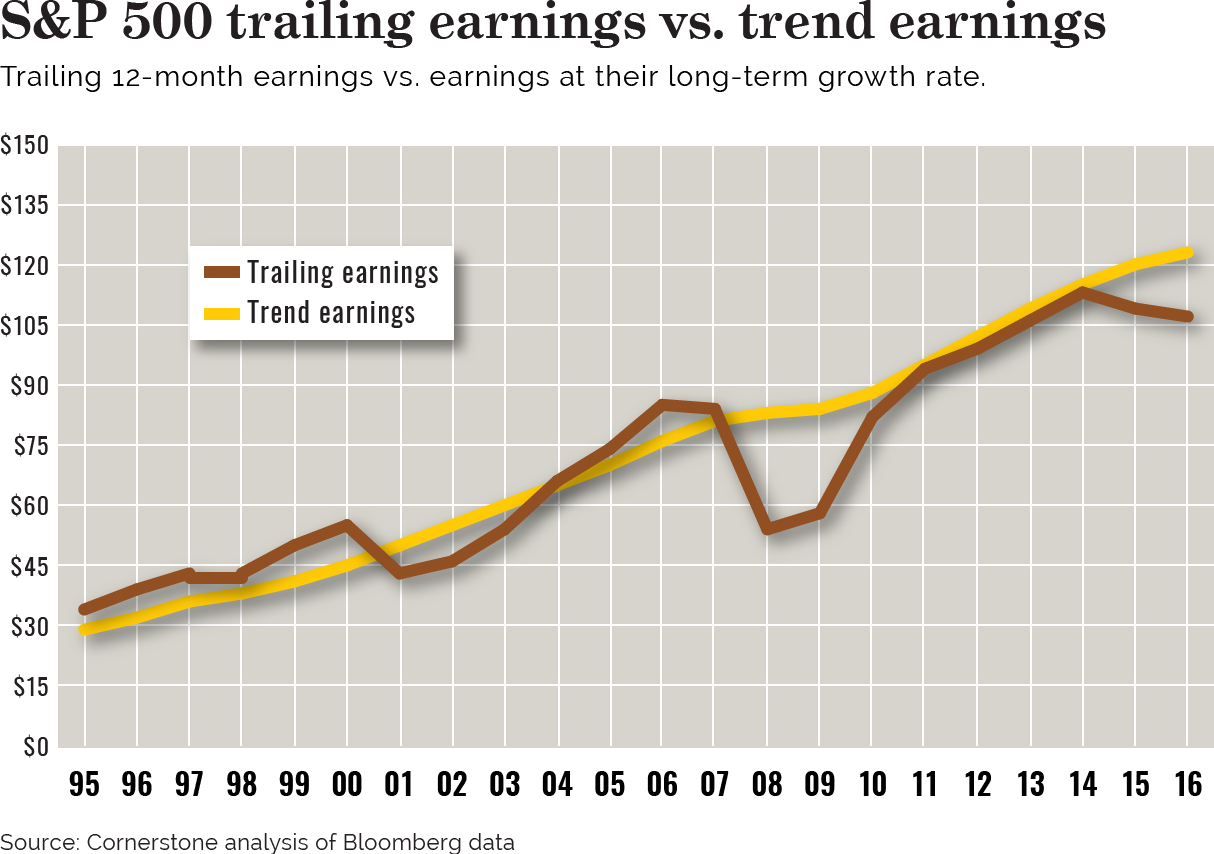 The current U.S. bull market now counts as among the longest and most rewarding in the country's history. It helped that the bull market began with historically low valuations — on trend earnings, the S&P 500 index bottomed at 8x. Recall, the resilience of corporate America was seriously doubted by many investors at the time.

In addition to beginning with highly favorable valuations, the bull market's returns since the bottom are also flattered by historically high valuations currently. Since 2009, the market has gone from one extreme to another. Valuations can remain elevated for a time but sustained advances from current valuations in the past have been during two distinct stock market bubbles (the late 1920s and late 1990s). U.S. earnings have mostly fully recovered and stock multiples have reverted from historically low to historically high levels. The result is that the S&P 500 index has returned 17% annualized since the market bottom eight years ago. If the past is any guide, to expect a lot more from this stock market is to expect another potential bubble.

On the flip side, progression of developed markets outside the U.S. could not be starker, even as many of the fiscal and monetary responses to the financial crisis were more aggressive than that of the U.S. For instance, the Japanese central bank is now an active stock market participant and owns more than $140 billion of the nation's ETFs per the Bank of Japan. Both it and the European Central Bank are active direct buyers of corporate bonds. The Chinese response itself would require its own discussion, but suffice it to say there has been no lack of monetary and fiscal response from the rest of the world. However, the impact of all this stimulus on the private sector outside the U.S. has left a lot to be desired. Although the authorities responded in a similar fashion worldwide, the U.S. is somewhat unique in having recovered all of its latent profitability. The MSCI EAFE index earnings peaked in 2007, declining 40% until finally stabilizing last year, still 25% below the trend line. In the meantime, it should be no wonder with those prospects that non-U.S. stocks would lag during the past several years. While the S&P 500 index returned 17% annualized since the market bottom of 2009, the MSCI EAFE index has returned barely 10% annualized. 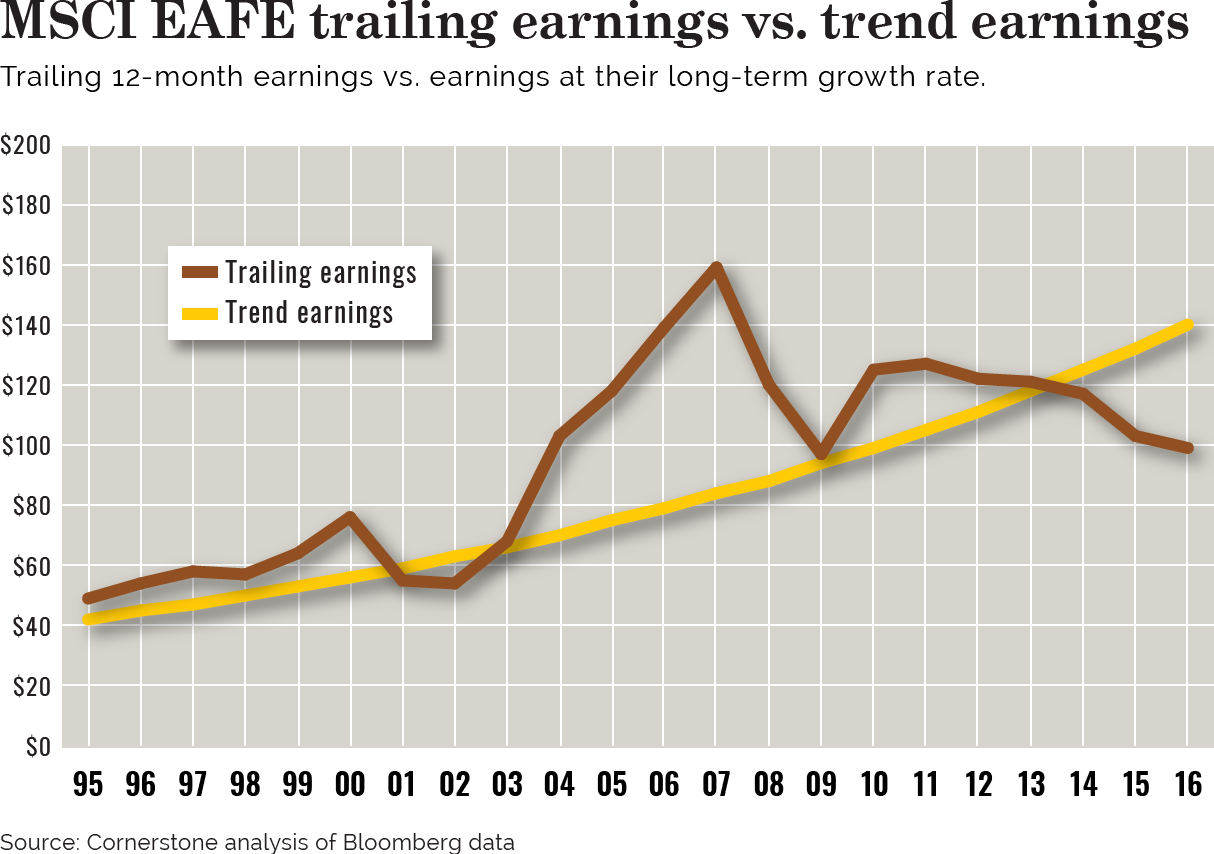 As the recent past looks comparatively poor for non-U.S. stocks, we believe investors have potentially mispriced those stocks. While foreign stocks have been on a pause for the past few years, our analysis suggests the earnings power of those businesses and consequently their intrinsic values have continued to potentially increase. We believe there is a large and widening valuation gap that has emerged in the past year or so. Specifically, when comparing the S&P 500 index and the MSCI EAFE index to their respective normalized earnings, the S&P 500 index now trades at a historic premium to its counterpart. 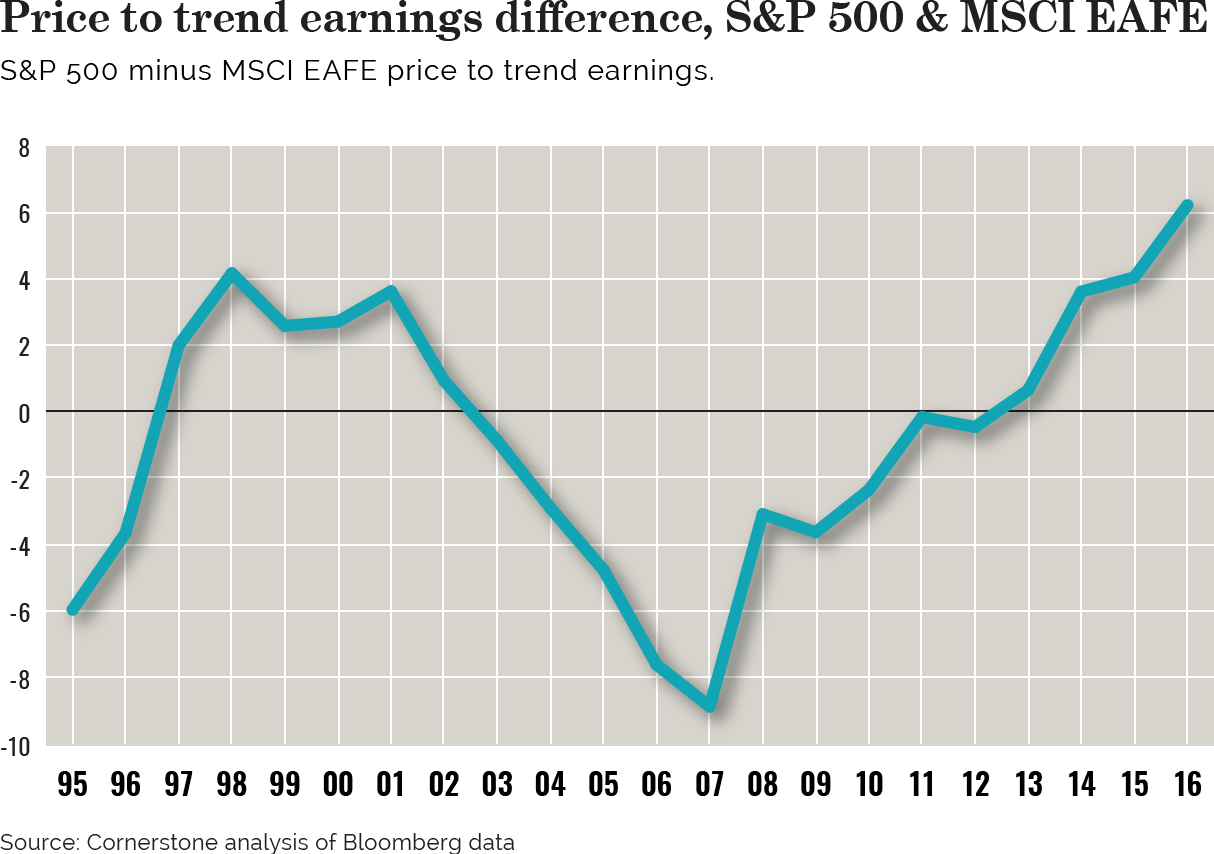 Given the apparent divergent earnings paths we would argue that conditions already have markedly improved in many developed markets but that the media obsession with European politics, most of which is noise, has distracted investors from that ground-level fundamental improvement.

While it is true U.S. earnings are forecast to continue improving, it is the same case with non-U.S. companies. The major and very important difference is that the S&P 500 index's potential improvement in earnings comes after its earnings already doubled from the lows of 2008, while the MSCI EAFE index's earnings have only begun to improve from the lows of 2008. This combination of low-valuation and latent earnings power potentially provides some insulation from an otherwise fully valued U.S. stock market.

Performance cycles shift over time to favor U.S. vs. non-U.S. equities and vice versa. One of the influences is the trend in foreign currencies relative to the U.S. dollar, with the current run in the dollar becoming rather extended,in our opinion. From our point of view there is less risk and higher potential in foreign stocks— quite the contrary to what we hear in the press. We understand it might feel uncomfortable investing overseas given all the negative headlines, but sometimes, when investing, discomfort is a positive signal.

Abhay Deshpande is chief investment officer and portfolio manager at Centerstone Investors, New York. This article represents the views of the author. It was submitted and edited under Pensions & Investments guidelines, but is not a product of P&I's editorial team.

Low-vol investing: Simple may no longer be beautiful

CLO managers use ‘print-and-sprint' to profit from cheap loans