Worldwide institutional assets of the largest 500 firms in Pensions & Investments annual money manager survey increased 9.2% in 2016 from the previous year to $39.46 trillion.

The year had a “rocky start” in equity markets, said investment management consultant Neil Rue, a managing director with Pension Consulting Alliance, Portland, Ore. “The beginning of January 2016 was one of the worst equity market experiences in history,” he said. And after January, the market stagnated. “Things were languishing right up until the election, and then you got a strong bump in the equity markets as a result of the election,” said Mr. Rue. “It was a very nice snapback.” 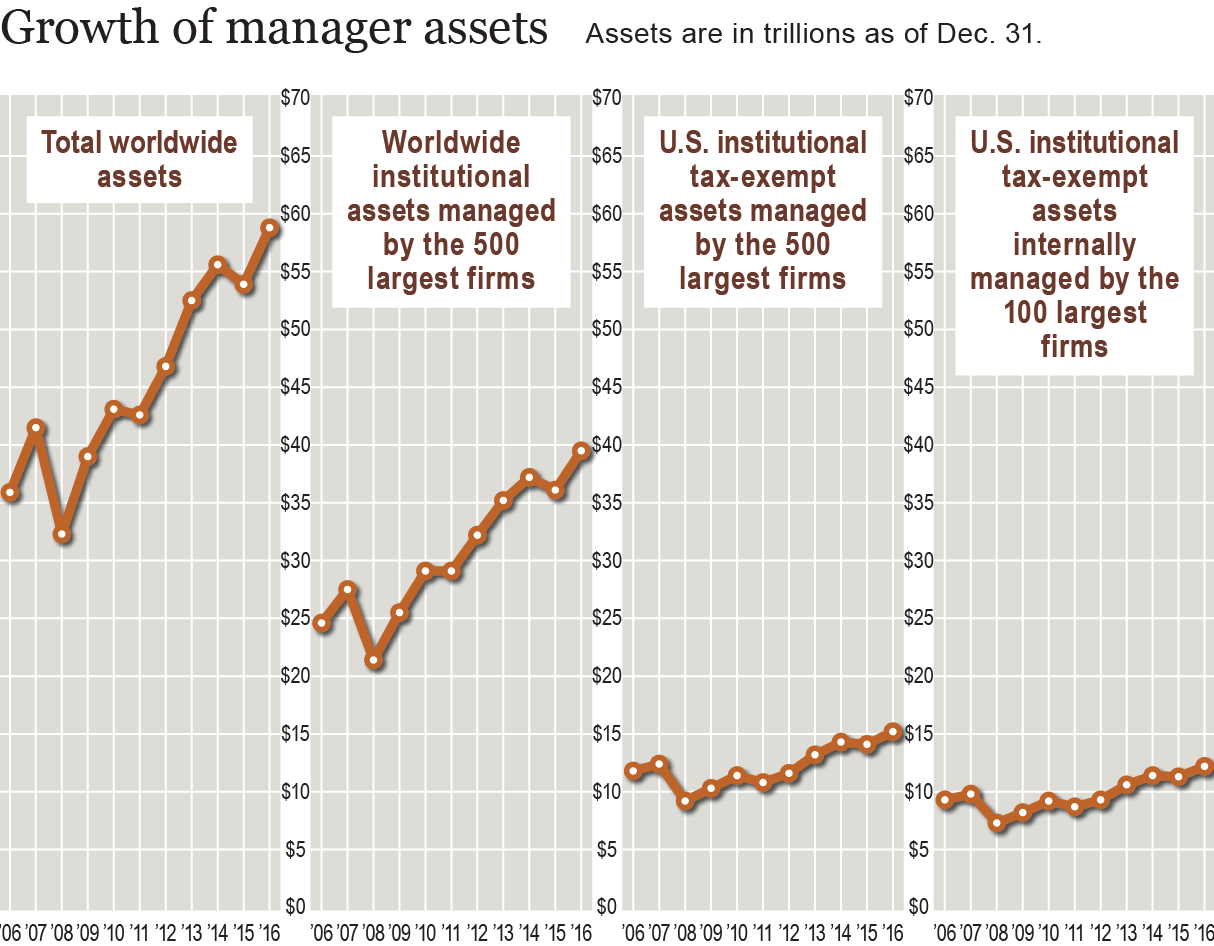 There was little change in the ranking of the top 10 money managers ranked by worldwide institutional assets under management. Wellington Management and J.P. Morgan Asset & Wealth Management switched places, with Wellington moving into seventh and J.P. Morgan slipping to eighth. (Amundi, which ranked 10th, did not complete a survey for the 2015 ranking.)

“Fees are becoming such an important focus, investors are reviewing the value of what they are paying for,” said Phillip Nelson, principal and director of asset allocation at investment consulting firm NEPC LLC in Boston.

“As a result of the shortfall in returns from the traditional asset classes, (clients are) coming to us for efficient market beta, through our iShares (ETF business) and indexing,” Mr. Conway said.

The nature of the business is changing, Mr. Conway noted. The firm in 2016 continued to see strong demand from clients for a more consultative approach to their investments, one in which BlackRock helps with overall portfolio allocation, instead of being hired for a specific strategy.

The old way of doing things — selling a specific investment strategy — isn't working for clients who are trying to solve bigger investment problems, he said. “They (clients) have clearly had enough of the self-interested product-pushing that they've experienced in the past.”

Vanguard Group Inc. was second in the ranking by worldwide institutional assets, but reported the largest growth among the top 10 managers. Vanguard reported $2.39 trillion as of Dec. 31, a 21.4% increase from the end of 2015. The firm saw a record $305 billion in net inflows in 2016, said Mortimer Buckley, chief investment officer based in Malvern, Pa.

The continued trend toward low-cost investing helped spur growth in 2016 in both ETFs and index funds, Mr. Buckley said. Another major investment category in which Vanguard saw sizable inflows in 2016 was target-date funds, he said. “We are benefiting from a tailwind in two major categories,” Mr. Buckley said.

He said the rise in passive investing coincides with the fact that more money today is being managed professionally. That competition among skilled professionals, along with easy access to financial data, makes it more difficult to find alpha.

Among the 25 largest managers of worldwide institutional assets, Asset Management One showed the largest percentage growth for 2016, up 211% to $382.5 billion under management to rank No. 25. Formerly known as DIAM Co., the Tokyo-based firm's boost came from a merger of four asset management units of Mizuho Financial Group and Dai-ichi Life Insurance Co.

Among the top 25 managers of U.S. institutional tax-exempt assets, the firm with one of the biggest percentage increases was Principal Global Investors. The subsidiary of Principal Financial Group, Des Moines, Iowa, saw a 24.4% increase in the amount of assets it managed to $218.4 billion. Principal Global Investors CEO James McCaughan attributed about half the increase to market performance and the other half to inflows, primarily into Principal's defined contribution business and particularly target-date funds.

“Having a long-established DC business has worked well for us over the last few years,” he said, adding that long-term positive performance managing DC assets gives Principal an advantage over firms that have entered the market more recently.

The increase in passive investing is likely to continue in coming years, said Bradley Morrow, Willis Towers Watson PLC's head of research for the Americas, based in New York. “I would expect that it would continue,” Mr. Morrow said. “It is very difficult to outperform the market, and more investors are looking at ways to get the market exposure as cheap as they can.”

One previously hot asset category that saw an overall decline in assets in 2016 was hedge funds. Money managers responding to the P&I survey reported worldwide hedge fund assets of $783.8 billion in 2016, down 2.2% from 2015. But mirroring the trend of recent years, direct hedge fund investments saw a 5.6% increase to $520.9 billion while funds of funds assets dropped 14.6% to $262.9 billion.

Mr. Love said most of the outflows have been in hedge funds of funds because of the multiple fee levels. “We are seeing more and more fund-of-funds managers drop incentive fees,” he said. “The flat fee portion is dropping to under 1% in a number of cases.”

Among other findings in P&I's survey:

Money managers by the numbers

Managers offer their favorite picks along the frontier

How we compiled the information