Equities in a rising rate environment

As markets prepare for likely interest rate hikes from the Federal Reserve, concern has grown regarding the possible implications for equity valuations. While no one can say with certainty what will happen, a combination of history and theory provides some guidance.

Specifically, when the Fed raises rates in response to improving or normalizing growth, rising rates tend to be positive for equities. Alternatively, when the Fed raises rates to lower inflation by slowing growth, rising rates are usually bad for equities. Currently, we are in the former state, and although short-term correlations can be noisy, we anticipate rising yields to reflect improving growth prospects and therefore to be at least modestly constructive for equities.

One way to think about the Fed's policy choices is to decompose interest rates into three regimes:

1. the long-run neutral rate, or as it is now commonly referred to, r*;

2. rates below this level; and

3. rates above this level.

The neutral rate can be thought of as the “Goldilocks” rate because it is the real rate of interest (nominal rate less inflation) that allows the Fed to achieve simultaneously its policy target of full employment while maintaining inflation close to the 2% target. Any higher level of interest rates should lower economic growth, thereby increasing unemployment. Any rate below the neutral rate should stimulate growth, increasing inflation.

In theory, the neutral rate is equal to the potential real growth rate of the economy. In the U.S., potential real growth has been estimated to have been 2% to 3% over the past several decades, suggesting r* has been approximately 2% to 3% and corresponding to nominal rates of around 4% to 5% (real rate plus expected inflation).

Exhibit 1, aided by the regression line, builds upon the relationship between real rates and growth, highlighting the impact on equity price movements. 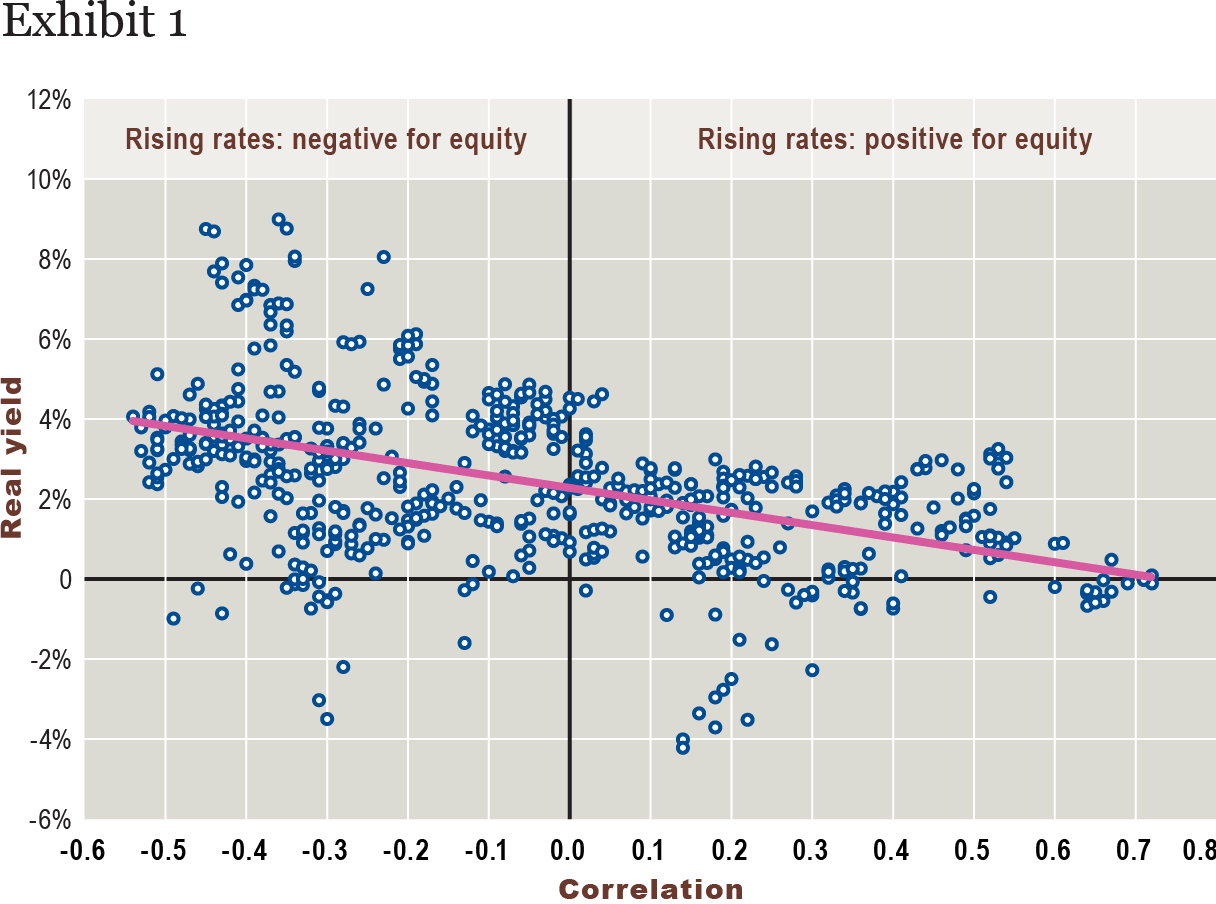 In the chart, we've plotted the correlations between movements in the implied real yield of 10-year Treasury rates vs. price movements in the S&P 500. Note that when real rates are low, reflecting monetary accommodation, correlations tend to be positive, meaning rising yields are associated with positive equity price movements while declining yields are associated with falling equity prices — consistent with the theory described above.

When the Fed needs to attack inflation, policies are designed to raise rates above the long-term neutral rate, slowing growth and dampening equity performance. Once inflation has been restrained sufficiently, rates are lowered and equity markets improve reflecting the more accommodative policy.

In Exhibit 2, we provide a time series of the relationship of these correlations. It's worth pointing out that in the 1970s and 1980s, most policy actions involved combating inflation. Since the mid-1990s, policy actions have focused almost exclusively on slowing growth.

There are no guarantees, but if history and theory provide any guidance, the process of rate normalization should be positive to neutral for equity markets. This is not to suggest that correlations will not exhibit some volatility over weeks or months, but over longer time periods historical relationships appear likely to be maintained. Additionally, the neutral rate might be lower now than in recent history, suggesting positive effects from improving growth might be more modest than in the past. The challenge for policymakers will be negotiating a path to normalization that doesn't tip the economy into recession.

Robert Lee is director of risk management and strategic analysis and Travis Simon is senior research analyst with Pavilion Advisory Group Inc., Minneapolis. This content represents the views of the author. It was submitted and edited under P&I guidelines, but is not a product of P&I's editorial team.

Rates up, banks up

As rates rise, investors scramble to lock in gains