Institutional investors have been gorging themselves on alternative credit for more than half a decade, and their collective appetite shows little sign of abating.

Analysis of Pensions & Investments' hiring activity shows that new assets committed to alternative credit strategies by institutional investors totaled $79.7 billion in the seven years and one quarter ended March 31. Commitments have grown every year since 2010, with 2016's $18.26 billion in commitments coming in 348% higher than the $4.08 billion in 2010.

At $7.4 billion, committed assets in the quarter ended March 31 are the highest three-month total since Jan. 1, 2010. If that pace continues, new money earmarked for alternative credit in 2017 likely will hit another high.

Distressed debt/special situations strategy commitments over the seven-plus years top other alternative credit approaches with $41.4 billion as of March 31. Such strategies attracted the most new capital in 2016, at $7.2 billion.

But the runaway winner in the first quarter was direct lending strategies, with $5.2 billion of new commitments — more than double the combined total of $2.2 billion committed to the other four alternative credit strategies that P&I analyzed. 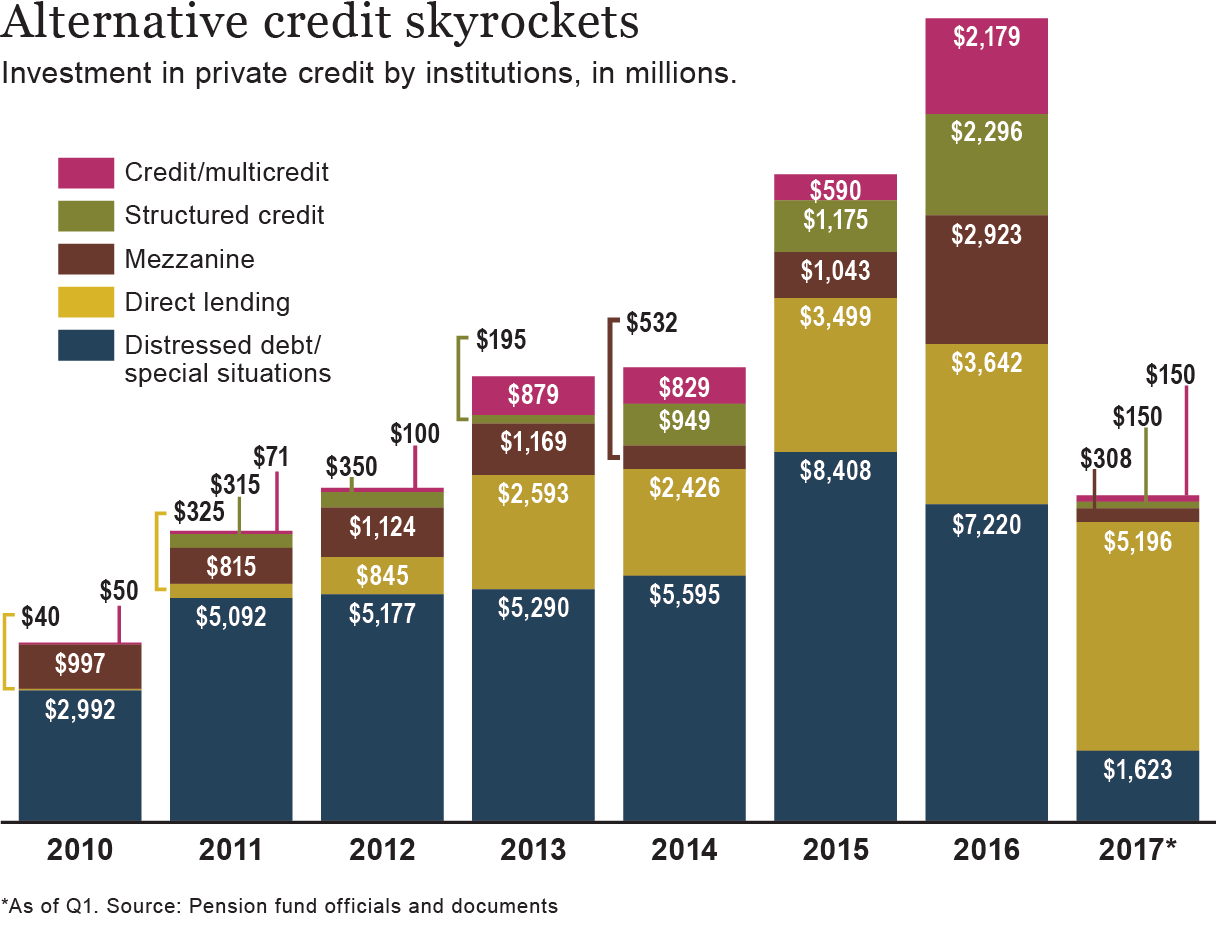 The promise of higher investment returns and risk reduction are the primary drivers behind the determined institutional push into alternative credit strategies.

Before the most recent financial crisis, institutional investors “didn't allocate to credit strategies; they just invested in fixed income and took on a lot of credit risk,” Mr. O'Brien said. “It was only when credit blew up (in 2008) that institutions began to take notice” as non-investment-grade securities became comparatively cheap.

Texas County & District Retirement System, Austin, committed $450 million to a direct lending strategy, part of an expansion of the $25.6 billion fund's allocation to the asset class.

TCDRS trustees approved an increase in the allocation to direct lending to 10% from 5% with funding coming from the reduction of the hedge fund allocation to 20% from 25% at an April 6 meeting. Investment staff began consolidating managers and reducing the hedge fund portfolio late last year, a process that will continue, Mr. Williams said.

Mr. Williams said the fund likely will add one or two more direct lending managers for allocations of similar size. “We have been spending time getting to know the space and like the return profile. Attractive current income generation (is available) with minimal principal risk when you hire managers with demonstrated credit skills. That's why you see larger allocations to (a) small number of managers. It's also a good time to be in floating rate instruments,” he said.

As of Dec. 31, TCDRS had $462 million committed to or invested in eight direct lending strategies, a transaction report showed.

Institutional interest in alternative credit strategies perked up again during periods of credit market weakness in 2011, 2015 and early 2016 — and interest is high now, Napier Park's Mr. O'Brien said. “Many more investors have specific allocations to credit-spread and cash-flow strategies now and the demand you're seeing in 2017 is the result,” he said.

Napier Park managed $7.6 billion as of Feb. 28 in alternative credit.

The search for higher returns has been rewarding for asset owners: 27% of institutional investors surveyed in December said their private debt investments exceeded expectations last year, and 66% said their expectations were met, according to analysis from London-based market researcher Preqin.

One asset owner making a significant commitment to alternative credit is Caisse de Depot et Placement du Quebec, Montreal, which will provide up to $700 million in capital over four years to The Edelweiss Group for investment in distressed investment and private debt in India. As part of the investment, Caisse will acquire a 20% stake in Edelweiss Asset Reconstruction, the firm's $4.5 billion distressed debt business. Caisse manages a total of C$270.7 billion ($203.2 billion) in Quebec provincial and other public pension assets.

The $44.4 billion Tennessee Consolidated Retirement System, Nashville, increased the allocation for direct lending to a strategic target of 10% with an interim target of 7%, from an original 5% target. As of Sept. 30, actual investment and commitment to the strategy totaled 3.8%.

For PSP Investments, the risk-reward structure, higher returns and lower volatility inherent in direct lending convinced investment officers to create a 7% allocation to the strategy and manage it internally.

Mr. Scudellari was hired in November 2015 to begin construction starting with the establishment of an office in New York, where he is based. His mandate is “very flexible” and allows his team to focus on a variety of principal debt and credit investments in primary and secondary markets worldwide, with a priority on financing non-investment-grade U.S. and European corporate borrowers.

PSP is a young defined benefit plan, established by the Canadian Parliament in 1999, which needs to more than triple its assets to provide benefits for federal public sector employees as well as the Canadian Armed Forces, Royal Canadian Mounted Police and the Reserve Force.

That necessitates deploying assets quickly and efficiently to build up the fund, which in turn meant the PSP direct lending team needed to create a deal network swiftly to be in line as a lender of choice, Mr. Scudellari said.

“We are one of just a few big lenders who are favored in the industry because we can provide size and price certainty,” he said, noting that between PSP's New York and London offices, his team is looking at between 20 to 30 financing deals a week.

PSP uses external managers tactically to access financing markets and deals more efficiently and profitably than internal staff can, he said. One such commitment was e500 million ($549 million) to AlbaCore Capital LLP in November for investment in European public and private debt with a focus on high-yield bonds, leveraged loans and direct lending.

Market conditions aren't easy at the moment and “we pick our spots and apply a high filter on industries,” stressed Mr. Scudellari, noting that good deals can be found in the U.S. secondary market.

Still, Mr. Scudellari said “there are a bunch of deals we look at and take on pass on. In fact, we've looked at over 500 transactions and acted on under 40 of them.”

PSP Investments had deployed $3.276 billion in direct lending deals as of Dec. 31.

U.S. high-yield bond strategies, which don't use a floating rate structure, also provide a typical yield of about 6% which is “very, very meaningful,” Mr. Scordellis said, in contributing to the net return of credit strategies.

“Interest income dividends are paid to the investor, rather than being reinvested in the fund, and the cash income can help a great deal in mitigating volatility,” Mr. Scordellis said.

Cash income can be important to smaller public pension plans, especially those that may have trouble on occasion in meeting benefit payments.

The Chicago Policemen's Chicago Policemen's Annuity & Benefit Fund, for example, just finished constructing what CIO Aoifinn Devitt labeled an income-generating portfolio. Ms. Devitt told trustees of the $2.34 billion fund at an Aug. 22 investment committee meeting that the search, which began in October, would be unusual because it is “agnostic about asset class” but requires that managers produce a cash coupon of at least 5% with a seven-year lockup or a coupon of at least 10% for a 10-year lockup with a two-year extension.

The final result is a $140 million portfolio with the following composition:

Observers are concerned about the frothiness of alternative credit markets, noting prices go up and returns fall when money managers follow lots of institutional money and create a crowded space. Some investors are becoming more selective in credit strategy investment options.

“It is an interesting time in the industry,” said Charmaine Chin, a New York-based managing director at hedge funds-of-funds manager K2 Advisors LLC.

“We're at an inflection point regarding rates and credit. For the first time in 10 years, investors are moving to credit risk from duration risk as rates begin to rise,” Ms. Chin said, noting that the environment is “making people wary and no one out there is super aggressive in these late innings of the credit cycle.”

New Mexico Educational Retirement Board, Santa Fe, is reducing its credit allocation to 18% from 20% in its latest asset allocation, said Bob Jacksha, chief investment officer of the $12 billion pension fund, in an email. The fund's investment team is shifting its alternative credit focus from the U.S. because “we think better opportunities are available in Europe as regulators and banks have been slower to adjust,” he said.

Fees fall along with performance; how much is hard to tell, exactly

Hospital prescribed makeover for its 403(b)

Rewards for infrastructure investing come with a price

Board issues recommendations to boost transparency in corporate bond secondaries