Pressure on prices contributes to consolidation that is thinning the herd, but growth continues

Defined contribution plan record keepers focused on providing their participants more effective education on financial wellness in 2016, during a year in which they saw their assets increase more than 9%.

Record-keeping assets for firms responding to the P&I survey increased 1.6% from the reported $5.42 trillion for the year ended Sept. 30, 2015. However, Aon Hewitt, which ranked fifth in 2015 in the overall rankings with $377 billion in assets, declined to participate in this year's survey due to the announcement in February of the acquisition of its record-keeping business by Blackstone Group.

When omitting Aon Hewitt from the last two years of data, this year's total represented a 9.2% increase from the previous year.

The number of participants among survey respondents, meanwhile, remained relatively flat when omitting Aon Hewitt's 5,743,462 participants in 2015, at 86.63 million, about 0.6% higher than the total of the prior year.

The numbers are declining partially due to consolidation in the industry. While 2016 lacked the blockbuster deals of the previous year, such as John Hancock Financial Services Inc.'s acquisition of New York Life Retirement Plan Services and Transamerica Retirement Solutions' acquisition of Mercer's DC record-keeping business, it remains a key trend in the landscape. Transamerica, which ranked 13th for record-keeping assets in 2015, did not complete the 2016 survey.

Edmund F. Murphy III, president of Empower Retirement, Greenwood Village, Colo., said in a telephone interview that consolidation will continue to be a theme in the coming years.

“There's roughly 53 record keepers today with over 100,000 participants (each),” Mr. Murphy said. “Scale is critical in this business given the pricing pressure everyone's experiencing. I do think that will continue. That number will narrow over the next several years.” 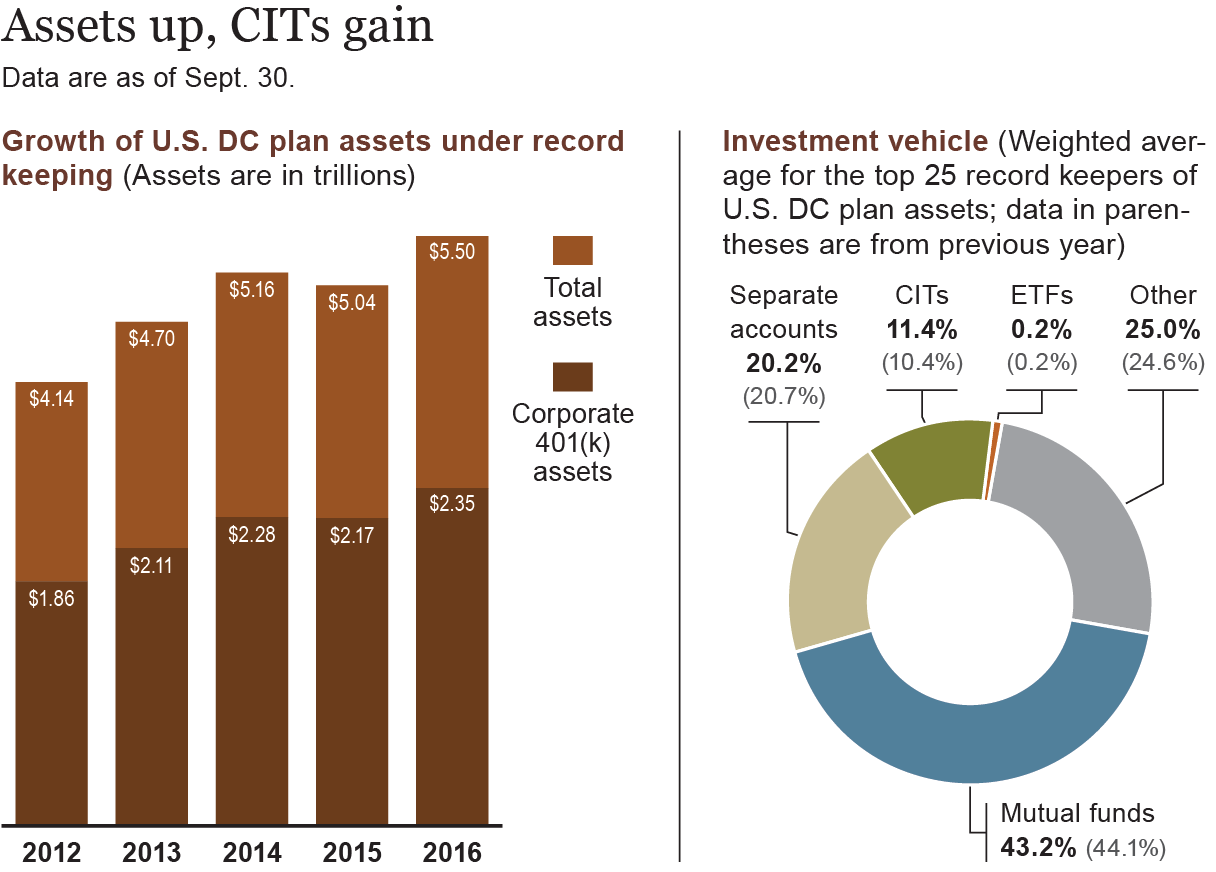 In the past year, plan sponsors have been focused primarily on regulatory issues along with the active litigation environment, said Jeri Savage, partner, defined contribution research, at Rocaton Investment Advisors LLC, Norwalk, Conn., in a telephone interview.

“On the regulatory front, (the proposed) Department of Labor fiduciary rule has been at the forefront of conversations,” Ms. Savage said. “The focus is on how their record keepers plan to act, not so much who is the fiduciary of the plan.”

“Within the litigation, I would say the sheer amount of litigation, what we typically call the breadth and depth of cases, has caught people's attention,” Ms. Savage said, forcing plans to continue to focus on issues she said have been part of the discussion for the past decade, such as excessive fees and the use of company stock as an investment option.

Mutual funds still dominate as the primary form of investment vehicle, although collective investment trusts continue to inch up in usage, compared to 2015 data.

In terms of the rankings, Boston-based Fidelity Investments was again at the top for DC record keepers ranked by assets, with $1.605 trillion as of Sept. 30, up 14.9% from the previous year. Fidelity also led the way in number of participants with nearly three times as many as the next-ranked record keeper, with 19.713 million participants, up 7.1% from the previous year.

“I would say the overwhelming themes or trend for 2016 has been really the focus on financial wellness,” Ms. McKenna said. “So clients are clearly looking for Fidelity and perhaps others to help their participants with their financial wellness decisions that go beyond retirement.”

Doug Chittenden, TIAA's executive vice president and president, institutional retirement, said in a telephone interview that a primary focus has been “how to engage with younger employees.”

“You know, it's easier to get people's attention on the need for saving for retirement when you're five years away from retirement,” Mr. Chittenden said. He said the company has been emphasizing efforts to create digital engagement among younger employees.

Empower Retirement ranked third in assets for the second year in a row, with $442.5 billion, up 12.6% from the previous year.

Ranked fourth overall again was Vanguard Group, Malvern, Pa., which reported assets of $437.1 billion in assets as of Sept. 30, up 15% from the previous year.

Lauren Valente, principal and head of institutional participant experience at Vanguard, said in a telephone interview that plan design and costs have been at the forefront of clients' minds during the past year, and Vanguard also has been developing ways to communicate financial wellness to participants, beyond just the state of their retirement accounts.

“There's a lot of discussion around financial wellness,” Ms. Valente said. “A lot of people are talking about this. Maybe there are a few tools, but from my perspective it's really ... still being defined.”

Bill McClain, Seattle-based principal at Mercer LLC, said the focus of many clients over the past year has been employee engagement.

“There's been kind of a broad recognition that traditional methods of engagement have failed,” Mr. McClain said. “Tools and products have been available across the spectrum, but having those tools out there overwhelms people and people seek answers at the point at which they need them. They're not going out there exploring the website, so what we're seeing a lot of demand for is, "We understand that many of the approaches we've used in the past don't work. How do we engage people?'”

“The other thing that I think is emerging is this convergence of retirement, health and, for lack of a better phrase, "wealth management,'” Mr. Murphy said. “All those dynamics are coming together.”

Vanguard's Ms. Valente pointed to the success of the number of clients using auto features, citing that 10% of plans had automatic-enrollment features in 2006, and that number is now nearly half of clients. Of that population, 70% use auto-escalation features and 97% use target-date funds as their default investment, she said.

Throughout the defined contribution landscape, auto features in general continue to gain momentum, particularly those auto-escalation features, as well as auto re-enrollment, a relatively newer feature in the drive to automate features for participants.

“The auto features continue to be very prevalent,” Ms. McKenna said. “Clients continue to add them, auto enrollment as well as auto increase. I would say it continues to be a growing trend. It really has taken hold, especially in our upper market ... the bigger employers have adopted these auto services, very much so.”

“We've been proponents of the concept for quite some time,” Ms. Savage said. “Some of our client base has been early adopters of this practice.”

By creating a re-enrollment window in which participants have the choice to move their money or reaffirm their investment options, and then moving participants who do not respond to the default target-date funds, it's a way to give participants the advantage of a lack of engagement, Ms. Savage said.

This year's P&I survey was the first in which record keepers were asked how much they spent on cybersecurity technology in the 12 months ended Sept. 30. Respondents said they spent a total of $86 million for the year.

Ms. McKenna said cybersecurity is a top priority for Fidelity, and clients are becoming more vocal about concerns regarding cybersecurity.

“Every minute of every day we focus on cybersecurity, and that's not an overstatement,” Ms. McKenna said. “Clients are asking about it with greater frequency, and they read in the press about breaches across places like Yahoo and some other places that have received press coverage.”

“I can tell you from the outsourcing perspective they're paying a lot of attention to whether or not their providers have the appropriate cybersecurity,” Ms. Credico said.

Because of the absence of Aon Hewitt in the survey, the rest of the top 10 record keepers moved up in the rankings. Taking that firm's spot in this year's rankings, moving up from sixth, was Voya Financial, Windsor, Conn., which reported $311 billion in assets as of Sept. 30, up 8.9% from the year before.

Rounding out the top 10 record keepers:

Company stock remains in plans, but at lower levels