A second California appeals court ruled Dec. 30 the state can reduce or eliminate pension benefits as long as employees still receive a pension that is “substantial” and “reasonable.” This ruling capped a tough 2016 for members of CalPERS, the largest public pension fund in the U.S. The $311 billion California Public Employees' Retirement System saw its funded status fall four percentage points to 69% and reduced its assumed investment rate of return to 7% from 7.5%. Given the fund's 10-year annualized return of 5.1%, however, even this return assumption might prove overly optimistic.

Evaluating what constitutes “substantial” and “reasonable” pension benefits remains a topic squarely in the public policy realm and outside the scope of this commentary. However, data describing pension plan expectations, performance and allocations might offer insights to market participants trying to tackle the hard problem of asset allocation.

The Public Plans Data produced by the Center for Retirement Research at Boston College contains detailed annual data from fiscal year 2001 to 2015 for CalPERS and other large U.S. state and local pension funds. An analysis of the data highlights two interesting findings. First, the average public pension plan reports a long-term return expectation of 7.6% as of 2015 (the last year available), a forecast that has declined approximately 40 basis points since 2001. Second, pension plans seem to expect to earn 10% per year from equities over the long term but little to no return from their fixed-income and alternative investments.

For 2015 (the last year available), the most optimistic plans in the dataset expected a 9% long-run return, and the most conservative plans forecasted less than 6%. Figure 1 reports the time series of these scattered assumptions. 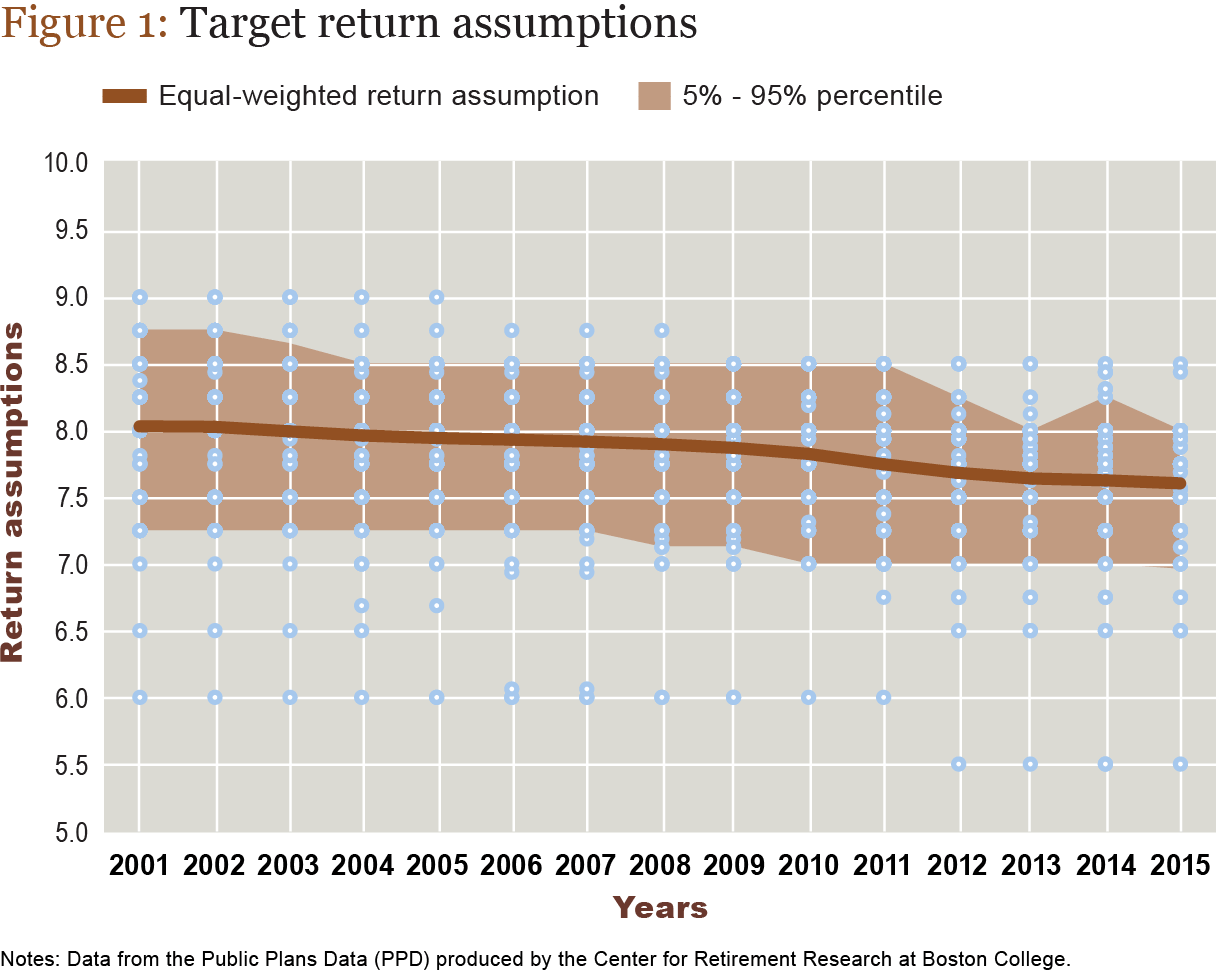 Across all plans in the dataset, the average return assumptions of pension plans have declined to 7.6% in 2015 from 8% in 2001. The decline in the average reflects small changes across most individual plans since 2008. The average year-on-year change differs statistically from zero only for years following the financial crisis, and only by five basis points per year. Since 2001, the average annualized return for these plans was about 5.7%.

Identifying where pension plans expect to generate these returns requires some algebra. If most plans operate with a mean-variance utility framework, it is relatively straightforward to calculate their implied asset-class return expectations given their portfolio-level return and volatility expectations, asset class allocations, and historical asset class volatility and covariance.

For example, during 2015 CalPERS assumed a 7.5% annualized return with a 13% target volatility. CalPERS allocated approximately 24% to U.S. equities. Based on the long-term covariance across asset classes, this suggests CalPERS' implied U.S. equity returns equal 10.3%.

Figure 2 reports these implied asset class returns across pension funds based on their fiscal year 2015 allocations. On average, the implied returns suggest an approximately 10% return to equities (U.S. and international) and 15% to real estate. The implied expectation for fixed-income returns is approximately zero. Return expectations for alternatives also remain low. 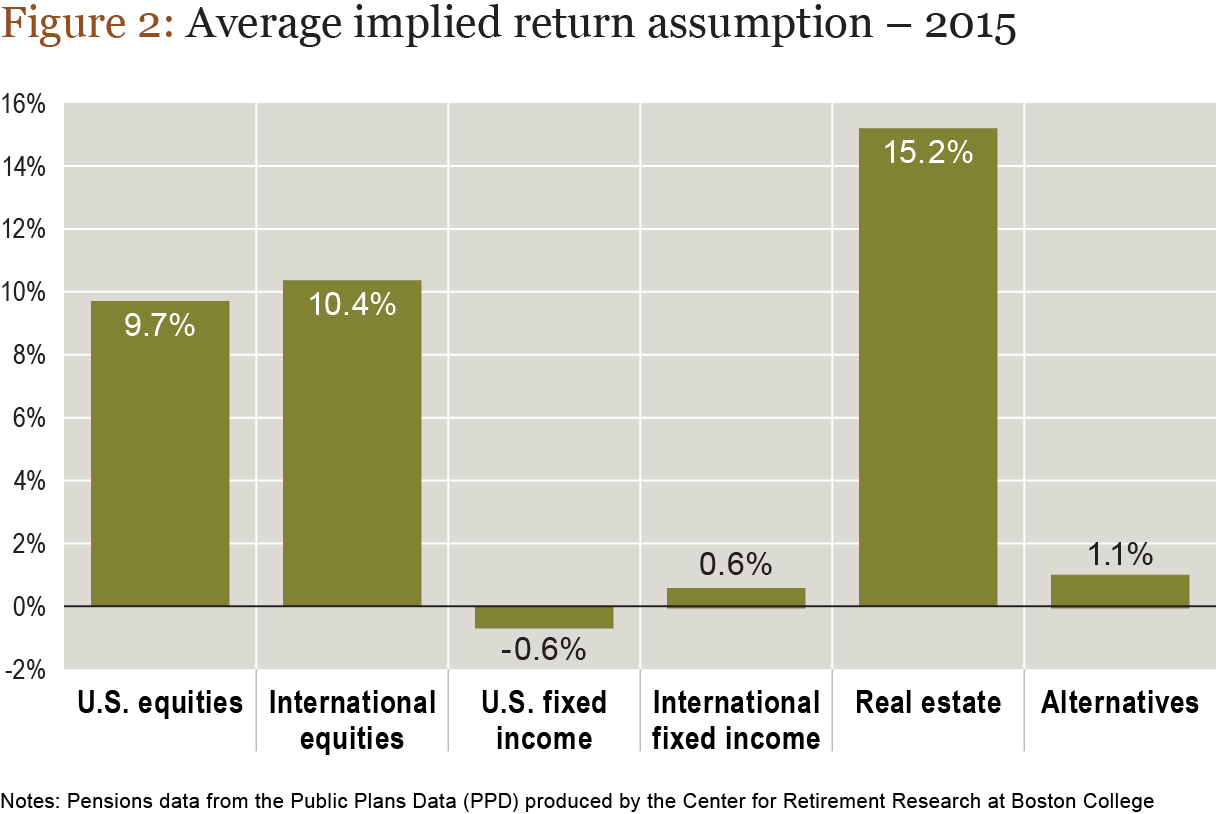 Whether these expectations prove realistic remains an open question. From 2010 to 2014, a chasm of more than five percentage points separated the implied expectations of pension plans and the published forecasts of leading sell-side banks for the S&P 500. It seems public pension funds did not adjust their allocations to U.S. equities to account for the higher volatility following the financial crisis, leading to significantly higher implied returns from U.S. equities compared to sell-side analysts' forecasts. Since 2014, that gap has narrowed.

At first glance, lofty investment return assumptions might seem unreasonably optimistic, but pension plans have a potential rationale. Certain accounting rules for public pension plans foster optimism, because public systems discount their liabilities based on their assumed rate of return instead of an appropriate-duration credit rate. This potentially encourages pension plans to report high return assumptions, even though markets might not reflect the same beliefs. When CalPERS cut its long-term forecast to 7%, it phased in its official forecast over the next three years. One might wonder whether that implies a higher degree of confidence in generating returns for 2017 and 2018 than in subsequent years.

Looking at pension performance from an actuarial lens reflects a grimmer outlook. The Public Plans Data indicate the average funded ratio across pension funds has declined from 99% in 2001 to 74% in 2015. During this period, the average year-over-over growth in liabilities of 5.5% across public pension funds outpaced the average growth in assets of 3.2%.

Without meeting their target returns or additional funding, pension funds will not keep pace with their liability growth rates, posing potential hazards to employee benefits and potentially straining government budgets in the future.

In January, CalPERS benefited from a $5.3 billion contribution from the state of California, an increase of 11% from last year. Other funds might not be as lucky.

Jeffrey N. Saret is head of thematic research, and Barbara Zhan and Subhadeep Mitra are thematic researchers at Two Sigma Investments LP New York. This content represents the views of the authors. It was submitted and edited under P&I guidelines, but is not a product of P&I's editorial team.