General partners putting money where investments are
Skip to main content
March 20, 2017 01:00 AM

Some of the most established private equity firms are starting to risk a bit more of their own money alongside their limited partners, finally acceding to limited partner desires that their interests truly be aligned.

“(Our) having skin in the game will be a great thing for our investors,” Mr. Navab said.

The large sum also shows KKR and its employees have a lot of conviction concerning the fund's success, he said.

When KKR began raising the fund, executives planned to commit $750 million in firm and employee capital, but the commitment rose as fundraising progressed. In the prior North American private equity fund, KKR committed about $500 million in combined capital.

And over time, employees generally committed additional money in deals during the fund's life, he said.

KKR invested a large sum in its newest fund in part because it can, Mr. Navab said. “We have a very large balance sheet compared to others. I think on both fronts (the firm and KKR employees), it shows a lot of commitment and a lot of conviction.”

KKR executives also believe increasing the firm's commitment to its fund was “the best use of resources,” Mr. Navab said.

KKR has been slowly increasing its GP commitment. In its two most recent flagship funds in each region, that commitment averaged 7.4%, up from about 3% in earlier funds. Since 2000, KKR's flagship funds — including its global, European, Asian and North American private equity funds — together averaged 6% in GP and employee commitments.

By comparison, The Blackstone Group LP committed about $500 million to its latest fund, the $18 billion Blackstone Capital Partners VII, with half from employees, said people close to the firm. Johan Oberg, a senior partner in the Stockholm office of The Boston Consulting Group, in an email said it seems general partner commitments appear to be trending up, “driven by a combination of macro-sector conditions and the shifting alignment dynamic between GPs and LPs.”

“The condition we see is higher competition among GPs, growing LP bargaining power and tighter regulation on the alternative asset management space overall,” he noted.

Private equity fundraising remained fairly strong last year, with the amount of capital up 5% to $345 billion for 807 funds, from $328 billion for 944 funds in 2015, according to Preqin. Still, the 2,965 alternative investment funds in the market seek to raise a combined $1 trillion.

A meaningful general partner commitment is important to investors, Mr. Oberg wrote. “It is perhaps the best indicator of GP/LP alignment and provides a source of comfort to LPs, knowing that decisions undertaken (with regard to) various portfolio companies will be unencumbered by any other motivation other than to secure an optimal financial return for investors.” 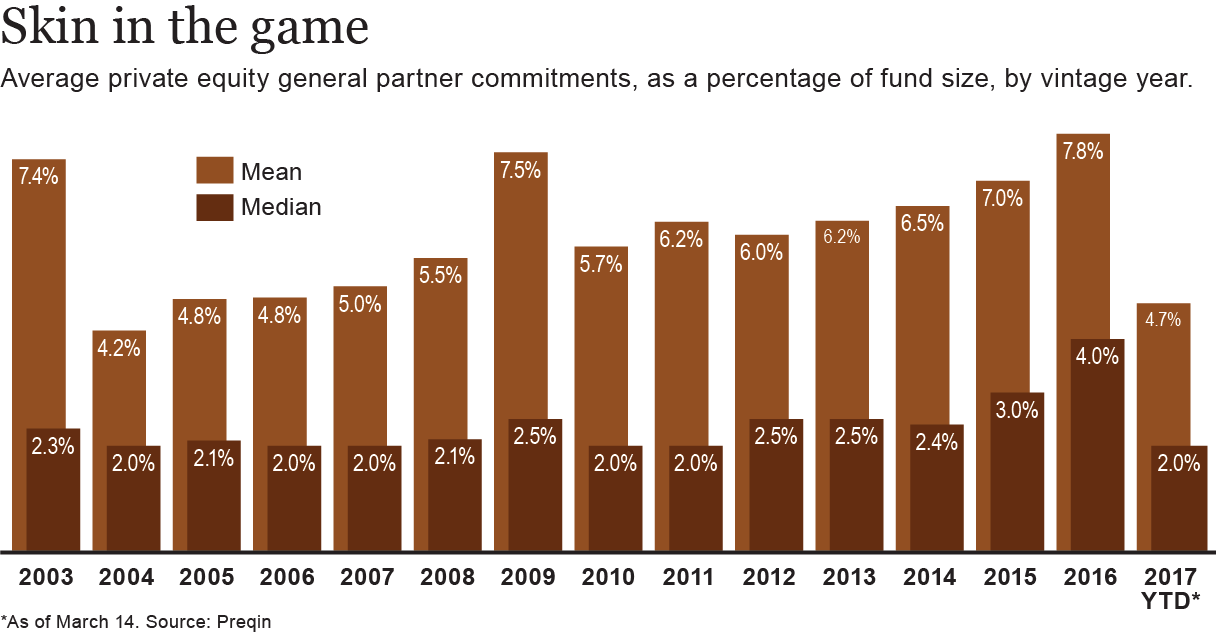 In its most recent version of the private equity principles, the Institutional Limited Partner Association, a Washington-based investor group, stated that general partners should commit a “substantial equity interest in the fund to maintain a strong alignment of interest with the limited partners, and a high percentage of the amount should be in cash as opposed to being contributed through the waiver of management fees.”

Private equity firms consider their general partner commitment a good investment, said Michael J. Moy, managing director of consulting firm Pension Consulting Alliance, Portland, Ore. “The more successful (firms) have the available capital and are convinced that they can earn more in funds they manage than elsewhere,” Mr. Moy said. “LPs always like to see alignment of interests and the more the GP commits (in cash, not fee waivers), the better.”

TorreyCove Capital Partners LLC., a San Diego-based private equity consulting firm, generally has found that more established firms generally commit 2% of total fund capital, with smaller or newer firms committing 1%. In the past, the larger private equity firms had enough capital to fund a portion of their general partner commitment with the fund's management fees.

“Management fees should be funding the operations of the firm,” said David Fann, president and CEO in the New York office of TorreyCove. “For most smaller firms, there isn't much left after paying for salaries, rent, travel, lawyers, etc. ... For much larger funds, there can be a profit, which can be used to fund a part of the GP commitment.”

A higher GP commitment can be a difference-maker for investors deciding between two funds. “Some of it may relate to the success a firm may have had over the years, and reinvesting profits,” Mr. Fann said. “It can be used as part of a marketing message to demonstrate commitment and belief in their skills as investors. There's a perception that GPs work harder and are more deliberate when a significant part of their net worth is tied to a fund.” n

Commentary: Going over waterfalls in a better barrel