Private equity has seen a meteoric rise in the past 20 years, and the evolution of the global PE ecosystem in the past decade has been nothing short of dramatic. Not only has institutional interest in the asset class surged globally, but also, as with many industries, there has been a continual cycle of rebirth as new firms and strategies are formed and others fall by the wayside.

In the past 10 years, more than 1,200 first-time funds were raised globally with an average size of $260 million, representing 44% of all funds raised by number and 17% of the total capital closed upon. 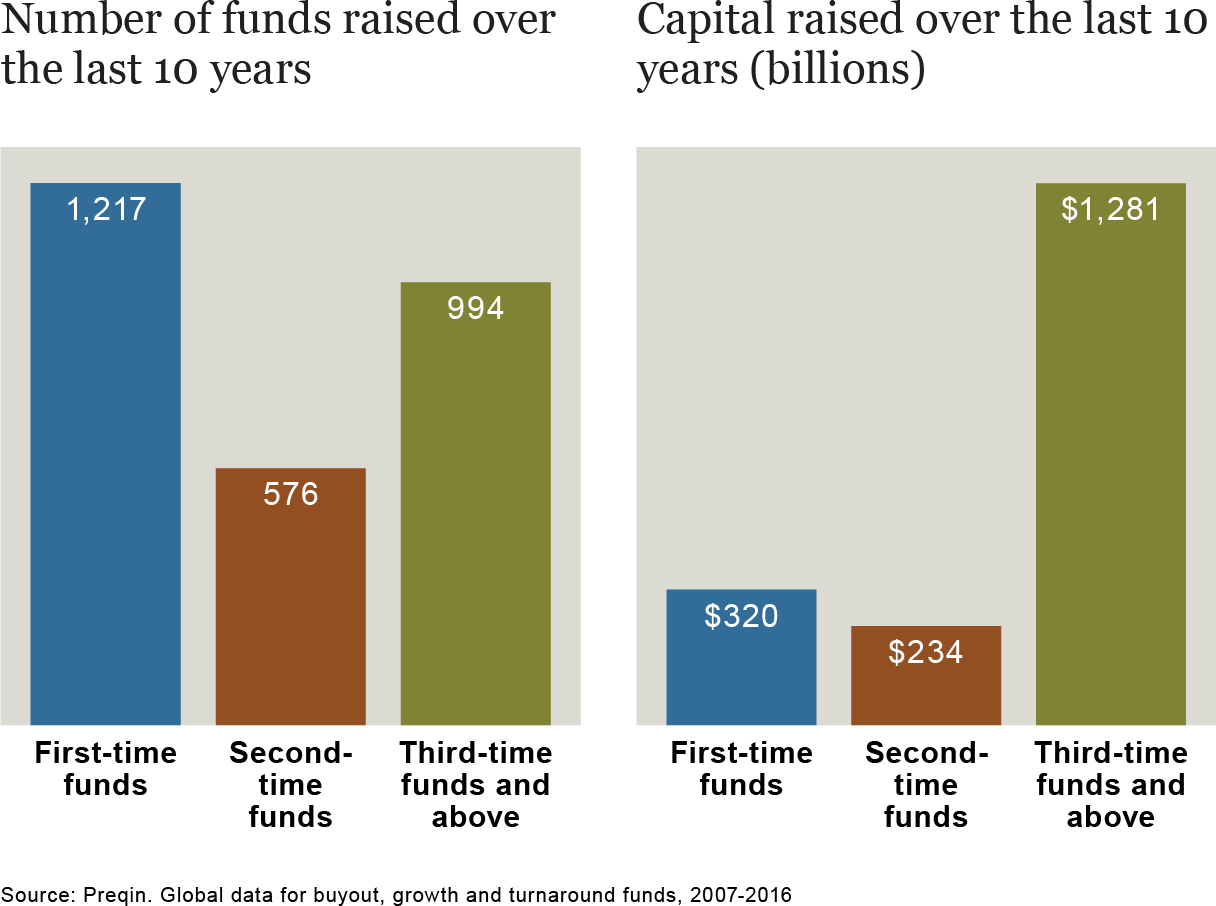 In hindsight, this makes sense given that many PE managers encountered significant challenges during the global financial crisis, causing several of them to splinter and/or veer down the zombie fund path.

Twenty-six percent of the approximately 4,000 buyout firms that had raised a new fund globally between 2002 and 2008 “went dark after the crisis hit, not raising another fund since 2009 and appearing unlikely to do so ever again,” according to a study by Bain & Co. In such situations, the best people tend to depart rather than hang around to milk legacy fee streams. At the same time, a generation of younger, talented private equity professionals who rose through the ranks during the 2000s have now reached the age and stage of their careers where they are ready to step out on their own. Talent and credibility is the tinder for new fund creation.

Far cry from the past

Historically, first-time funds gained a well-deserved reputation for being much riskier and for delivering volatile and/or subpar performance.

Twenty years ago, a common profile of a first-time private equity manager was an investment banker or consultant teaming with a former colleague or business school classmate to try their hand at principal investing. The obvious problem was that most of these newly minted GPs had neither the relevant investment experience nor a history of working together. Not only were they first-time fund managers, but they often were first-time PE investors.

However, the profile and institutional quality of first-time fund managers has evolved considerably over the last decade, and the performance implications of this evolution appear to be significant. According to Preqin, in the 10-year period through 2012, first-time funds consistently outperformed peers in nine of 10 vintage years — a far cry from below-market performance that tainted the entire category of “emerging managers” 15 or 20 years ago. 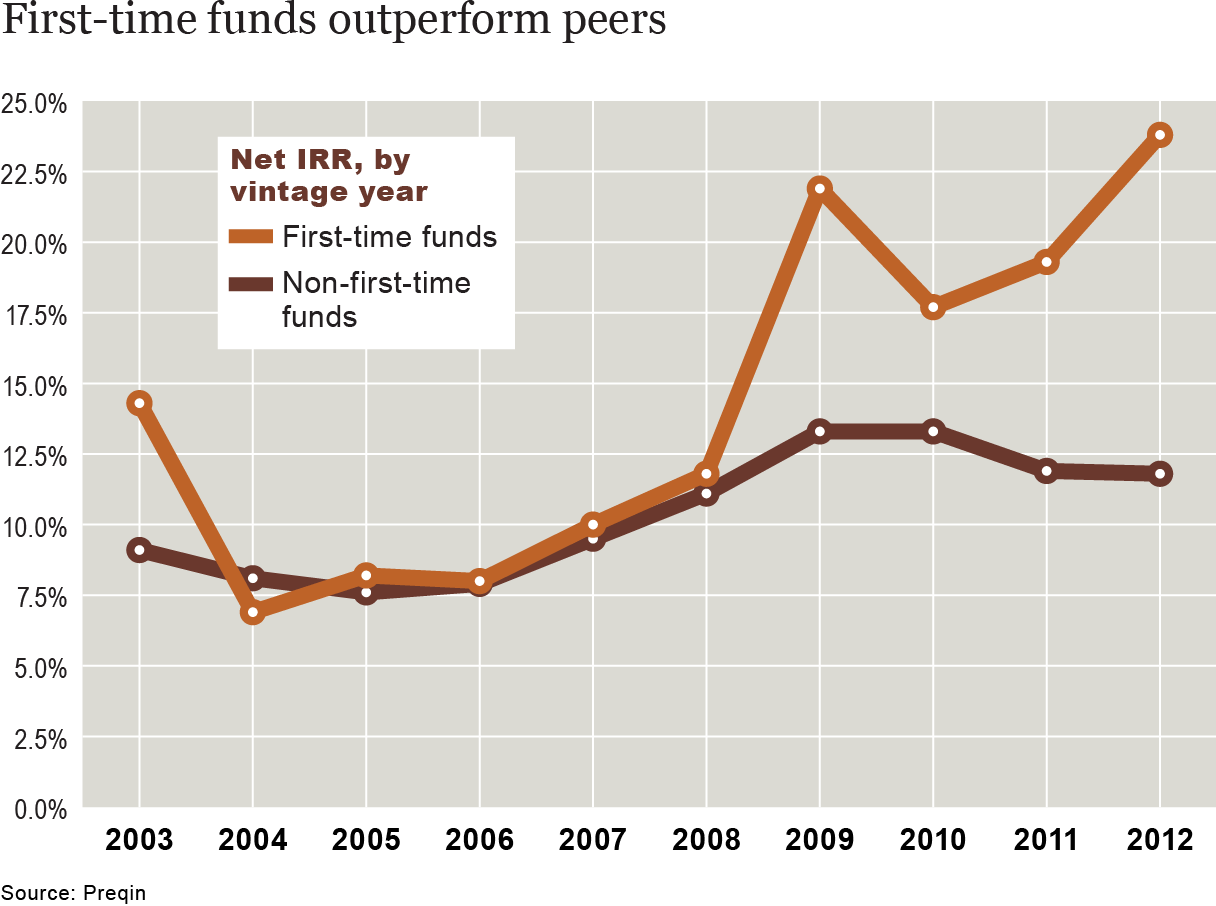 While every situation is unique, there tends to be a common pattern to how the PE industry rejuvenates. These days, new funds tend to take one of three forms:

Spinouts — Teams within established PE firms leave to raise an independent fund, which often stems from a desire to get back to one's roots pursuing smaller deals. Other times, spinouts follow a difference in opinion over firm strategy or fund economics. Either way, members of the departing team want to strike out on their own and control their own destiny.

Graduating fundless sponsors — Many other firms start as independent or “fundless” sponsors, investing on a deal-by-deal basis with the backing of family offices and/or more risk-tolerant institutional investors. This structure gives the team time to mature and jell as a group, and to build a track record off which to ultimately raise a more traditional blind pool.

New in-house strategies — Well-established PE firms might launch companion fund strategies following a period of robust firm growth that forces GPs to move up-market and abandon the segment previously occupied by their flagship strategy. Rather than leave their roots completely behind, general partners elect to launch a smaller fund to capitalize on their continuing deal flow with smaller transactions and provide opportunities for up-and-coming professionals. In other cases, they might raise dedicated sector funds, geographically oriented funds, minority growth strategies or even companion credit strategies.

While there are many variables at play, we would argue the more recent class of first-time fund managers has more PE experience — on average — compared with the typical new manager two decades ago, as well as a verifiable history of working and investing together prior to launching. Moreover, many of these teams end up running smaller, more specialized pools of capital than they had previously, leading — in theory — to a higher concentration of their best ideas/deals.

Regardless of the reason, recent performance data are eye-opening, and this evolving ecosystem of new firms and funds has emerged to be fertile ground for limited partners seeking to identify the next generation of top-quartile managers.

Regardless of the path, there seems to be no shortage of new general partners and fund strategies on the PE scene these days. And, in parallel, there is a growing cadre of limited partners eager to parse through this fresh new landscape in hopes of finding the next great fund early, before it becomes highly sought after and difficult to access.

Scott Reed is co-head of U.S. private equity with Aberdeen Asset Management Inc., based in Boston. This content represents the views of the author. It was submitted and edited under P&I guidelines, but is not a product of P&I's editorial team.

Pacing models are useful, but have limitations

Why small to midsize endowments shouldn't follow the Ivy League

Are concentrated portfolios more volatile than a diversified index?