Some think European growth is on the upswing, and the region's equity markets offer opportunities. Others note that bond spreads have widened over recent weeks as France's National Front Party, led by presidential candidate Marine Le Pen, saw a surge in popularity over rival candidates encircled by rumor and scandal.

Sources expect Ms. Le Pen to triumph in France's first round of elections next month. A second round will follow in May to determine the victor.

But executives say they want to see a further widening of French government bond spreads before they switch into buy mode.

“Political uncertainty is here to stay, given elections in three key (European Union) member states and the dawn of the Brexit negotiations,” said Michael Herzum, head of multiasset strategy at Union Investment in Frankfurt. “At the same time Europe's cyclical growth outlook is better than ever since the outbreak of the euro crisis.”

Mr. Herzum said the better growth outlook will lead to slightly higher inflation rates in the eurozone, reinforced by a rebound in commodity prices and “the presumably reflationary policies of the new U.S. administration.” Although the situation remains far from normal, he said the threat of deflation in Europe is diminishing — as is the need for ongoing high monetary stimulus from the European Central Bank. He expects the ECB to taper its asset purchase program sooner rather than later, because its room to “maneuver is shrinking substantially, as it will approach the binding purchasing limits ... in the first half of 2018, at the latest,” he said.

These elements have come together to create implications for investors.

It is incredibly challenging at the moment,” said David Hussey, London-based senior managing director, European & EAFE equities, at Manulife Asset Management (Europe) Ltd. “We have been waiting for years for Europe to get its day in the sun, margins to normalize,” and for growth to rival or surpass the U.S., and we “kind of feel we have a chance now. But what makes me nervous is obviously politics,” he said. Mr. Hussey said spreads in sovereign bonds reflect political concerns.

“The degree of political uncertainty is likely to have a strong impact on the performance of sovereign bonds,” said Mr. Herzum, particularly as election campaigning peaks in France, the Netherlands and Germany. The Dutch go to the polls this month, and Germany's federal election will take place in September.

That uncertainty, he said, might encourage a flight to bunds and other safe-haven assets. However, at the same time investors will have to deal with the impact of the cyclical recovery in Europe and the prospect of less support from the ECB: an upward pressure on yields. “So in total, the outlook for European bond markets is rather challenging. We take a skeptical stance and currently have an underweight position in peripheral bonds, for instance,” added Mr. Herzum.

The spread on French government bonds, Obligations Assimilables du Trésor — known as OATs — has expanded significantly since the start of the year, said Gavin Counsell, London-based senior fund manager on the multiasset team, Europe, at Aviva Investors. Spreads over bunds are around 75 basis points, compared with an average 40 basis points at the start of 2016 which tightened to around 20 basis points in August. On the equities side, French banks have also fallen about 10% vs. other European banks. “So the market is clearly worried” about the impending elections, said Mr. Counsell.

“Does that mean we are wanting to get into positions just yet? Probably not, because we wouldn't be surprised if spreads widened (and) the French index does a little worse — there are potentially opportunities to add value,” he said. The OATs opportunity would be “more compelling if it widens another 20 to 30 basis points, and you could see that between the first and second round of elections.”

That view is also held by John Beck, London-based senior vice president and director of fixed income for Franklin Templeton Investments' fixed-income group, although his core argument is that “this is the year of absence of political shock.” Expected outcomes of elections in Germany and the Netherlands, which he believes will maintain the status quo when it comes to political standings and positions in the eurozone, “lead us to believe there is a diminution of bond market concerns” and that spreads will “probably come in.”

While France's election is a “big uncertainty,” the probability of Ms. Le Pen's ultimate success in the decisive second round of elections is limited, Mr. Beck said. Nevertheless, he expects French bonds to widen as political noise kicks in, but he will not be taking advantage of spreads just yet. The team is neutral on France, “but on any further widening into March and April, which is more time- than spread-dependent, I think we would buy,” he said.

Robert Tipp, chief investment strategist at PGIM Fixed Income in Newark, N.J., said French yield spreads have not been this wide since the early 1990s, aside from the 2012 euro crisis period. “The market is taking the threat of a Le Pen victory very seriously, pricing in a small but significant probability of very steep losses. The policies she has put forward could be devastating for the bond market,” such as adopting a new French currency, revoking central bank independence and leaving the European Union. 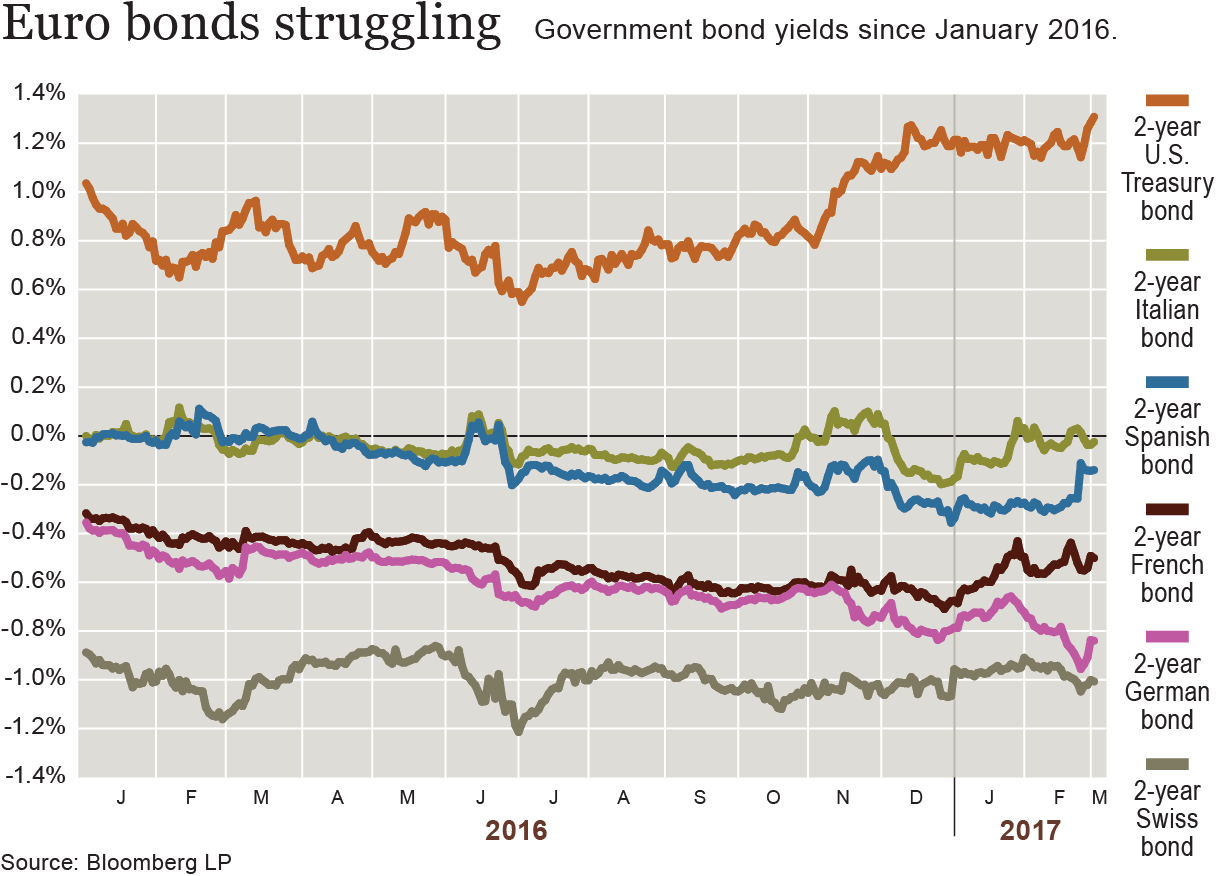 But while investors are waiting for the right time to enter the bond market, the European equity market is altogether more attractive.

“We think politics is often overestimated as a risk toward equity markets,” said Martin Todd, London-based European equities portfolio manager at Hermes Investment Management. He cited limited market reaction to the U.K.'s vote to leave the EU, and the election of Donald Trump as president of the U.S. in November.

However, sentiment was weak toward Europe last year “and I think a lot of that is to do with politics.” Executives at Hermes see Europe as an attractive market, with reasons for optimism — “particularly when sentiment is pretty poor toward the asset class. I know (Ms.) Le Pen's odds have gone up in the polls, but a lot of political risk gets priced in before the event.”

With market reactions difficult to forecast, as evidenced by the aftermath of the Brexit vote and election of Mr. Trump, “this year (we are) not going to spend a huge amount of time trying to forecast what will happen” in relation to the French election, Mr. Todd added.

“In contrast (to bonds) European equity markets offer some promising opportunities,” said Union Investment's Mr. Herzum. “Political risk is a negative factor here, too. But these cons are more than compensated by a long list of pros: reasonable valuations, a presumably lower euro and — most important — strong momentum in earnings growth in light of the better macroeconomic conditions.”

Union Investment estimates a rise in European corporate profits of about 12% this year, “which builds the foundation for higher stock markets. Despite the fading tailwinds of the ECB, chances are therefore good that equity prices will rise further. This time it won't be due to higher valuations, but to improved earnings,” he said.

Aviva Investors' Mr. Counsell sees “reasons to genuinely be positive about Europe” over the medium to long term. Executives are generally overweight European equities at the moment, thanks to the long-term story. “If there is a wobble we can add further. We do have European bank positions, and we topped that up in ... the dip,” said Mr. Counsell.

Russell Investments' multiasset team similarly had European overweight positions at the end of the year and has kept those in place, said David Vickers, senior portfolio manager in London. “We are toying at the edges with maybe buying a call option on Europe — (that is a) better risk-adjusted way (to invest), and because volatility is so low ... you can buy call options at a relatively efficient price."

European funds could face scarcity of U.S. bonds for LDI

Chances for manager gains expand as funds sprout up across Continent