Firms at the crossroads: Offer alpha or disappear

Hedge fund managers have been put on notice: evolve, deliver or die.

Unless managers produce alpha, diversify institutional portfolios and protect their downside at a fair price, they risk more of the crippling outflows many experienced in 2016.

Between the largest and specialist niche managers, numerous midtier managers will be under immense pressure from institutional investor demands for lower fees, an ongoing low-yield environment and increasing complexity of business operations, pushing many out of business by the end of the decade, according to a new report from The Boston Consulting Group.

“It's a question of the value proposition of hedge funds. If managers are charging 2% and 20% and aren't producing returns, the jig is up,” said Brent Beardsley, managing director and senior partner based in BCG's New York office.

The impact of net negative flows and performance is already evident in the havoc wreaked on the assets of many hedge fund managers tracked by Pensions & Investments for the year ended June 30, 2016, according to annual survey data.

Global market conditions in the past two years didn't make it easy for a wide swath of managers to generate the alpha expected by institutional investors paying high fees for market outperformance.

“By the end of 2016, after nearly eight years of a global bull market, average hedge fund returns were what you would have expected after adjusting for average beta and performance of most strategies lagged long-only U.S. equities,” he added, stressing that “returns like this generated a lot of unrest among investors.” 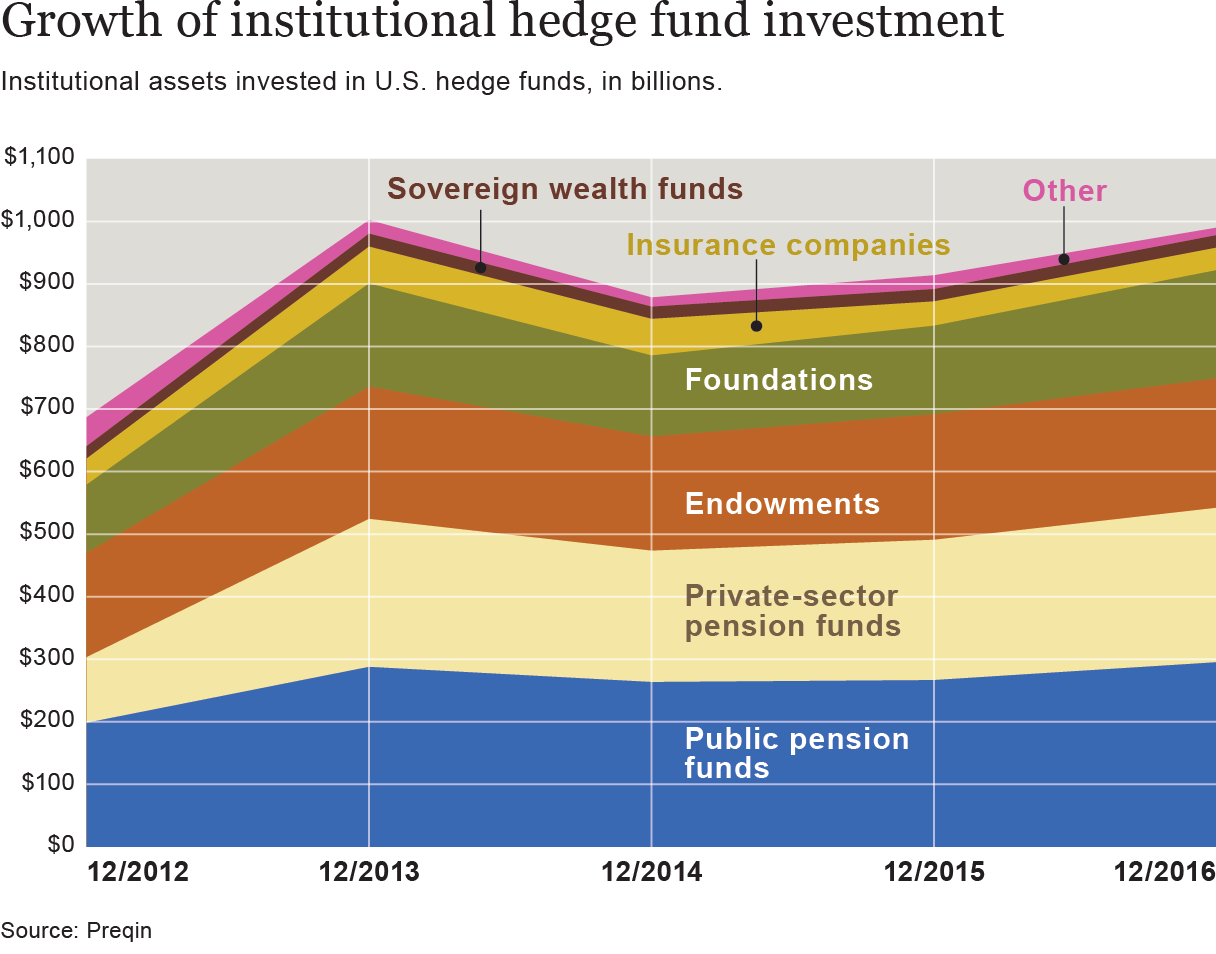 The disquiet has led many to take a hard look at the hedge funds in their portfolios. “Many institutional investors are questioning what role hedge funds play in their portfolios. They are more routinely dissecting the contribution of alpha and beta returns, how to capture each most efficiently and what to pay for them,” said Michelle Noyes, New York-based chief operating officer of industry group Alternative Investment Management Association.

Despite a few high-profile “noisy” investor departures from hedge funds, by and large “investors have become more sophisticated and are much better at determining a manager's luck vs. talent,” said an executive at activist hedge fund firm who asked not to be named. “There are still a lot of investors that are making first-time allocations to hedge funds.”

“Institutional investors are more intent on picking firms in which they have confidence in the manager's ability to generate alpha,” said the executive.

Ironically, asset owners played a big part in reducing a manager's ability to uncover and exploit sources of alpha, sources said, due to the sheer volume of money invested over the last decade.

“If you go back 10 or 15 years, hedge funds sprang up when managers left traditional money management companies. But from that early pioneering phase, the hedge fund industry has moved to having so much money to put to work in the markets that it's become much harder to find alpha,” said Bruce Keith, noting institutional investors were responsible for much of the inflows. Mr. Keith is CEO of Infrahedge Ltd., London, a managed accounts provider.

At the heart of the matter is the question of whether active management can consistently outperform passive strategies. “At fair fees, hedge funds are a more efficient, clearer, risk-adjusted version of active management,” said Clifford S. Asness, managing and founding principal of AQR Capital Management LLC, Greenwich, Conn.

“We're hearing a lot of rumbling out there about hedge fund fees, which is something we've been talking about for 10 to 15 years,” Mr. Asness said, stressing “hedge fund managers are making too much of their money from being net long, which makes paying high fees even more egregious.”

Akin to the traditional investment management arena where institutions are moving with alacrity to passive strategies, Mr. Asness said assets are leaving hedge funds for systematic and passive approaches.

“If active managers can't produce (outperformance), they can't earn fees. It's the same equation for hedge funds,” Mr. Ellis said, noting the result of hedge fund managers not generating alpha will be a “very healthy shaking of the tree. The hedge fund industry has always exhibited an incredibly Darwinian evolutionary process. There have always been fund closures as a result.”

“Nothing has changed,'' said an executive of a large multistrategy hedge fund firm who spoke on condition of anonymity. “The hedge fund industry has always been an incredibly competitive space where the strongest survive. Capital is taken away from those managers who don't perform and given to those who do.”

“I think we've reached the point where there's too much money invested in the space but I think more money will flush out in the first part of this year because investors can't tolerate poor performance,” the source said.

That's because the vast majority of the 8,300-plus active hedge funds are very small and only “a couple hundred offer a compelling value proposition,” said Jon Hansen, managing director and hedge fund specialist at investment consultant Cambridge Associates LLC, Boston.

“Because of the trillions invested in hedge funds nowadays, experienced talent is spread thin and much of the capital is crowded around the same opportunities with a highly short-term focus,” said the activist hedge fund executive. “It's a lot harder for most managers to produce alpha in that situation. What's needed is the talent, experience and conviction to do things differently from everyone else, and not many firms have that.”

Hedge fund gainers and losers
Ranked by one-year change in assets under management as of June 30, 2016. Assets are discretionary assets managed in hedge funds worldwide, in millions.

The success of these firms puts them at an advantage in terms of generally not having to concede to demands for lower fees, observers said. A number of the largest, most institutional managers closed their strategies to new investors some years ago to maintain performance.

“We're interested in hedge fund managers that are focused on a particular asset space as opposed to being huge asset gatherers. These specialized managers often are closed or semi-closed and very protective of their strategy's capacity. And they definitely are very performance focused,” said Tracy McHale Stuart, partner and CEO of hedge funds-of-funds manager Corbin Capital Partners LP, New York.

“A surprising number of our "nichey' managers don't want press exposure,” she added.

Goldman Sachs' Mr. Clark said “there are two groups of hedge fund companies. The successful firms are not making changes because they don't have to. The world hasn't changed for them.”

The multistrategy hedge fund executive who declined to be named said the firm's funds are closed and fee concessions haven't been made. And because of institutional investor interest, the firm — like many other high-demand companies with closed funds — does offer capacity at regular fee levels to “good partners.” Those are desirable institutional investors, particularly corporate pension funds, endowments, foundations and sovereign wealth funds.

By contrast, many members of Mr. Clark's “other group” of managers with declining AUM, performance problems or out-of-favor strategies are being pressured by asset owners to renegotiate both management and performance fees as well as other contract terms.

Demands ranged from more liquidity, performance hurdles, multiyear incentive schedules and managed accounts to funds of one and customized strategies such as a partial investment sleeve of a multistrategy fund, Mr. Nadel said.

The problem, Mr. Nadel said, is that “costs are rising for hedge fund managers, especially for institutionally oriented firms, in every aspect of their businesses including cybersecurity, IT, record keeping, artificial intelligence, rent and overhead. The question is how managers can deal with higher costs when investors want lower fees. The only thing they can do is raise and maintain assets in order to meet increased expenses.” 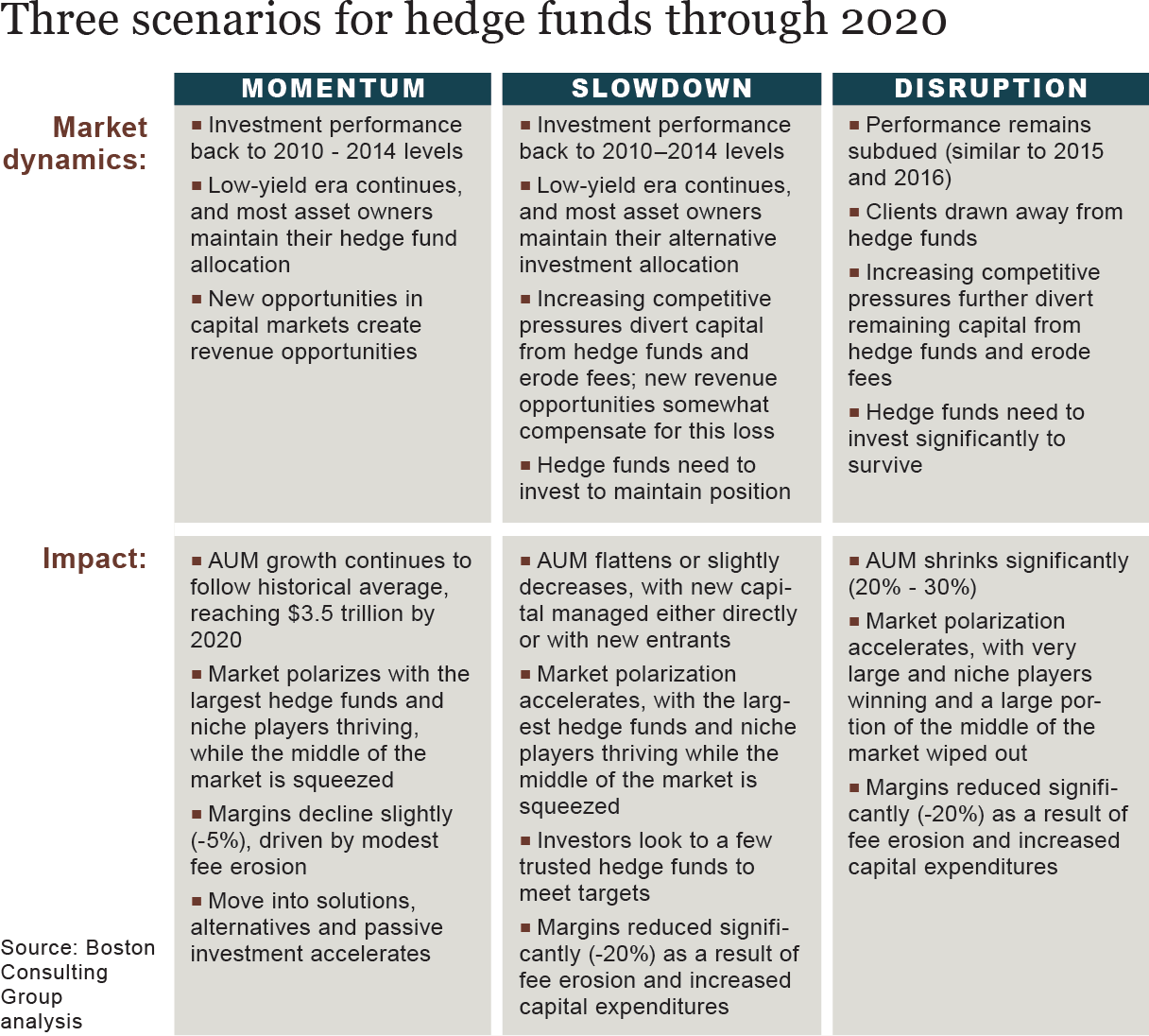 But managers are listening to institutional investors and making changes.

To hold on to assets, Cambridge Associates' Mr. Hansen said he's seen a “180 in the market in the past year. Years ago, when we engaged a hedge fund manager on the issue of fees or alignment, the manager thought, `If I do this proactively, it will be taken as a sign of weakness.' Conceding is not considered so dangerous any more.”

Mr. Hansen said he and his colleagues have had “a lot of success” in getting management fees down because “as returns get lower, that fee really eats into an investor's return. We've been able to get managers to really focus on what it costs to run their business and lower their fee accordingly. The management fee is the capital the manager needs to run the business, not a source of profit.”

The next evolutionary step for managers is to start focusing on fairer fees by introducing sliding scales or performance hurdles, Mr. Hansen said, adding the effort is “still a work in progress. It's to no one's advantage if we disadvantage the manager by requiring a lower performance fee,” thereby reducing the incentive for portfolio managers to strive for performance.

Success and survival for midtier hedge fund companies depends to large degree on the manager's self-assessment of skills and value to institutional investors.

“Good questions for all hedge managers are: What return can you produce? When? How? And for how long?” said Kevin P. Quirk, principal, Casey Quirk, a practice of Deloitte LLP, Darien, Conn.

“Hedge fund managers have an opportunity to define what kind of return they can provide that will help institutional investors meet or improve return expectations,” Mr. Quirk stressed, adding “the next three years will be very interesting in the hedge fund industry.”

Complaints aside, ETFs are in hedge fund portfolios

AI going to head of the class

Lone Pine's Mandel to step back from fund management in 2019