CIT adoption on the rise in DC plans

The use of collective investment trusts in defined contribution plans is growing at a dramatic clip, encouraged by two factors: A heightened, ongoing regulatory focus on plan fees and vast improvements in the investment vehicle's features over the past five to 10 years.

Strengthened by their lower fees, greater flexibility in investment management and less complexity in plan management, CIT usage overall reached $1.58 trillion in assets at year-end 2015, compared with $895.6 billion in 2008, according to Pensions & Investments.

The recent overhaul of the New York State Deferred Compensation Plan's investment lineup shows the rising value of CITs to help cut costs and reduce asset allocation overlap. After an intensive request for proposal process, the board of the nation's largest deferred compensation plan voted to replace some of the plan's mutual funds with less expensive CITs and add a few CITs; something we believe would not have been considered during the last plan review in 2008.

CITs — also known as commingled funds, collective investment funds or collective trust funds — have been around for more than 75 years. However, dramatically improved features over the past few years — including record-keeper acceptance, consultant familiarity, pricing flexibility, daily valuation, NSCC Fund/SERV compatibility and improved reporting and transparency — have helped fuel their adoption, especially in DC plans. Plan sponsors also appreciate that CIT trustees are subject to ERISA fiduciary standards with respect to ERISA plan assets invested in the vehicles.

As investment expense is generally the largest single cost associated with a retirement plan, lower-cost vehicles, including CITs, provide plan sponsors and participants the potential for considerable savings as the industry becomes more focused on reducing costs to enhance performance and avoid fee litigation. The potential pricing flexibility and cost advantages that CITs offer when compared with other investment vehicles are translating into a rising demand in the DC market:

Lower costs or fee advantages are a clear benefit of CITs over mutual funds. In comparison to mutual funds, CITs typically have lower administration, marketing and distribution costs. As CITs are not subject to oversight from the Securities and Exchange Commission, they do not incur some of the expenses associated with compliance and regulatory reporting. There is no need to support the marketing and distribution of the fund into the retail space (e.g., producing prospectuses and maintaining retail call centers). Participant record keeping generally is at the plan level, rather than the CIT level, which can allow greater flexibility on record-keeping structure and costs. This can all result in both lower initial and ongoing operational costs. As such, CIT median fees can be 20 to 25 basis points less than mutual fund fees, as shown in the chart below: 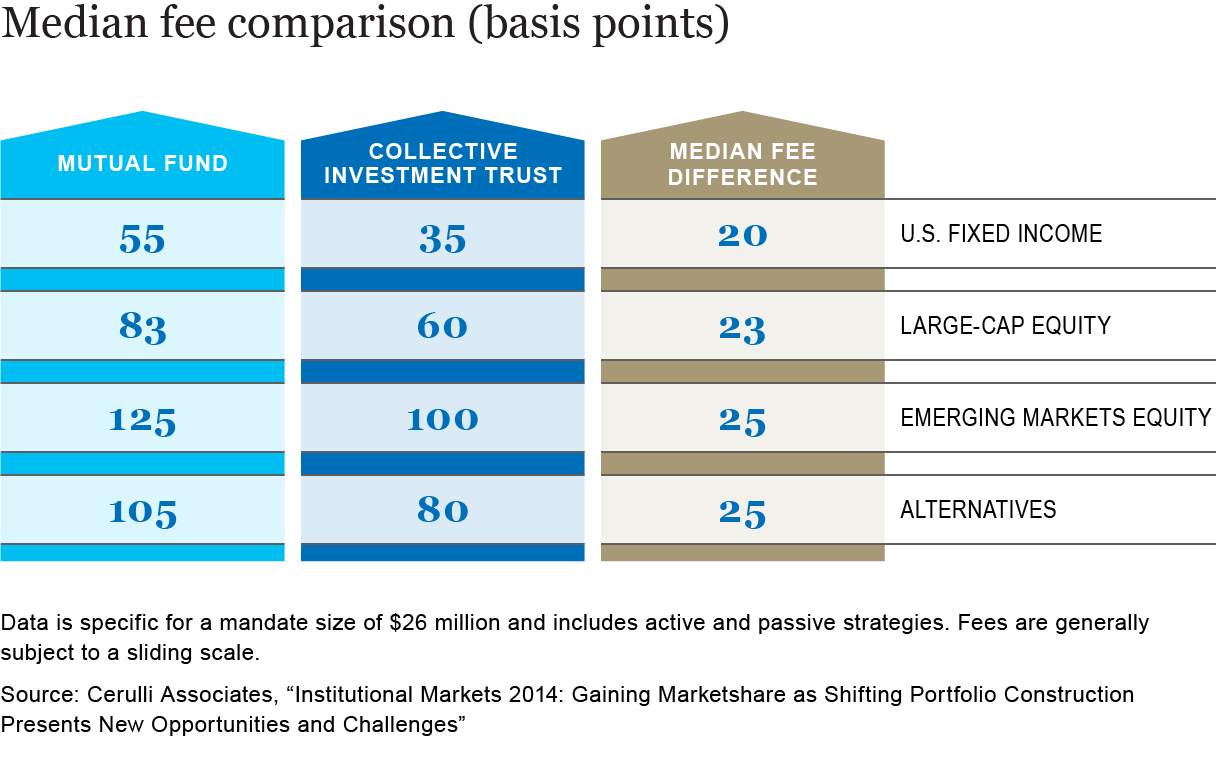 CITs can include any of the investment assets that are in mutual funds, they can be actively or passively managed, they can be index funds, funds of funds, or non-traditional funds such as real estate investment trusts. CITs are particularly useful in single-manager or multimanager funds of funds, such as asset allocation (target risk or balanced) and target-date funds. These investments are growing in popularity due to their designation as qualified default investment alternatives under the Pension Protection Act. Today, the CIT structure is increasingly deployed in target-date funds — often in an open-architecture approach giving plan sponsors a means of creating custom glidepaths for their participant population at an affordable price.

Plan sponsors (working with the plan's consultant and ERISA attorney) should consider the following questions to determine whether moving to CITs within the plan's investment lineup would benefit the plan and participants:


Walter “Tripp” Braillard is executive vice president, head of retirement strategic accounts, for BNY Mellon Investment Management in Boston. This content represents the views of the author. It was submitted and edited under P&I guidelines, but is not a product of P&I’s editorial team.

Visions of early retirement may sway some to save more