Private equity, real estate victims of their own success

Most alternative investments took a hit in assets in the year ended Sept. 30, as higher distributions than capital calls made their mark on defined benefit plan portfolios.

There were a few bright spots: energy investments rose 52% and infrastructure, 16.2%, but both were coming off still-small bases.

Private equity and equity real estate particularly suffered from too much of a good thing.

“Most of our clients had trouble keeping their allocations up in private equity,” Mr. Nesbitt said.

Overall, private equity assets fell 7.2%, to $300.5 billion, a far bigger drop than the 3.9% slip reported in the year-earlier survey. Unlike that report, when assets in four sectors P&I tracks — mezzanine debt, distressed debt, buyouts and venture capital — exhibited growth, in the current survey, all of the private equity sectors were down. Reported investment in venture capital was down 10.3% to $33 billion, mezzanine debt fell 9.1% to $6 billion, buyouts dropped 5.2% to $167.6 billion, and distressed debt, 3.4% to $25.6 billion.

The situation is at least partly the result of where we are in the market cycle, Mr. Nesbitt said. 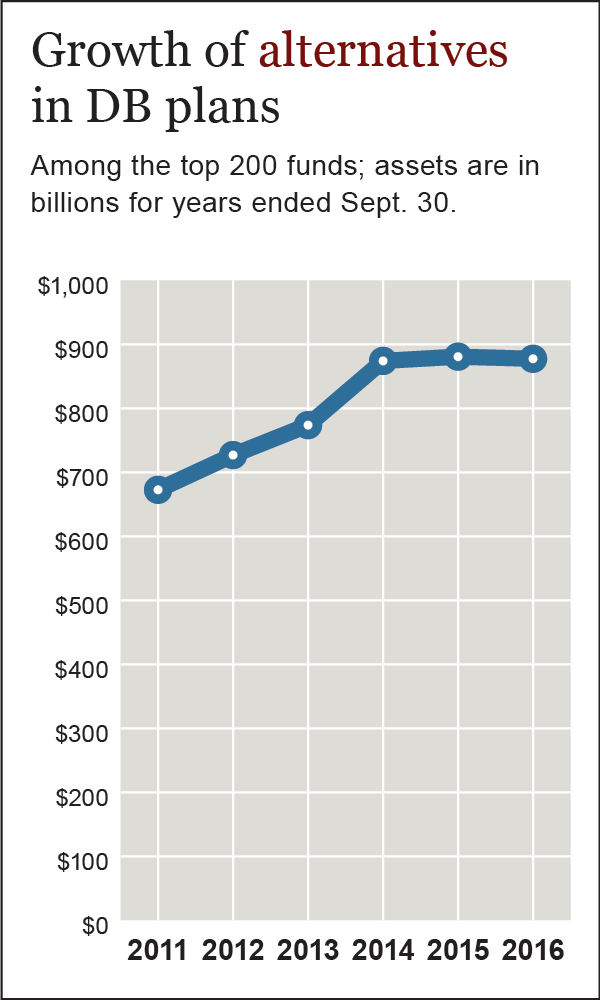 Private equity managers are taking advantage of high valuations to exit portfolio company investments and sending a portion of the profits, mostly in cash back to the limited partners. While investors are committing capital to new funds, managers aren't spending that new money because of those same high valuations, he added.

The $306.6 billion California Public Employees' Retirement System, Sacramento, leads the ranking of defined benefit plans among the top 200 with investments in private equity.

But even with that top spot, CalPERS' private equity investments dropped nearly 11% to $25.6 billion during the survey period. CalPERS also is in the first position for buyout assets but is down nearly 9% to $15.2 billion and mezzanine, with assets down 6% to $2 billion. CalPERS is second on P&I's distressed debt list with assets down 11.7%% to $2.7 billion and seventh for venture capital with assets down 20.7% to $1.3 billion.

CalPERS was not alone. Among the top five defined benefit funds in the ranking of private equity investors, only two — third-ranked Teacher Retirement System of Texas and fifth-ranked New York State Common Retirement Fund — had an increase in private equity assets

The private equity portfolio of the $196.4 billion California State Teachers' Retirement System, West Sacramento, dropped 12% to $16.3 billion; and the portfolio of the $111.8 billion Washington State Investment Board, Olympia, dipped 2.2% to $15.8 billion.

Within equity real estate, timberland assets dropped 3.6% to $10 billion for the year ended Sept. 30, not far off the 3.9% slip revealed in the year-earlier report. By comparison, the NCREIF Timberland Property index returned 3.28% for the 12 months.

The equity real estate asset drop experienced by DB plans in the top 200 also can be explained, at least partially, by a flurry of distributions. Real estate fund managers returned $128 billion in cash while calling only $72 billion in capital in the six months ended June 30, according to London-based alternative investment research firm Preqin.

What's more, investors received the highest amount of distributions in 2015 since 2006, with $212 billion distributions vs. $148 billion in capital called, Preqin data show.

“Real estate managers are selling everything they can that makes sense to sell,” said Nancy I. Lashine, managing partner and founder of New York-based placement agent Park Madison Partners.

“The seventh year of an economic recovery is not a bad time to raise capital and hopefully be sitting on it in the next downturn, Ms. Lashine said. “Nobody is expecting the level of correction we saw in 2007, 2008 and 2009. But trees don't grow to the sky and there's a sense things might correct at this point.”

Ms. Lashine said interest in investing in U.S. real estate has continued to increase relative to other asset classes.

Two years ago, investors had invested in Europe, betting on gains from the region's recovery that lagged the U.S. However, the U.K.'s vote to leave the European Union and the stronger dollar have scared off some investors from European property, Ms. Lashine said.

During the survey period — in November 2015, CalPERS sold a $3 billion portfolio of opportunistic real estate funds and reinvested the money in core properties to better align with its real asset strategy, Ms. White said in another email. As a result of the secondary sale, CalPERS' core real estate exposure increased to 75% from 35% of its real estate portfolio as of Sept. 30. Property appreciation also contributed to the increase in real estate assets, she noted.

As for REITs, some investors might have sold off REITs as they rebalanced their real estate portfolios, said Brad Case, senior vice president, research and industry information at the National Association of Real Estate Investment Trusts, a Washington-based trade association.

For example, the $11.7 billion New Mexico Educational Retirement Board sold some REITs because its real estate allocation — which includes REITs — was a bit overweight with 7.3% invested compared to its 7% target, said Bob Jacksha, chief investment officer of the Santa Fe-based fund.

The New Mexico pension fund ranks 17th by REITs assets, with a $357 million REIT portfolio as of Sept. 30.

Real estate has benefited from a continuing low supply of properties and high demand, and “there is nothing to say that that will not continue several years into the future,” Mr. Case said.

Reported hedge fund investments were down 6.4% to $151.1 billion as of Sept. 30, laid waste by disappointing returns and the reduction or elimination of allocations, and the termination of underperforming funds by some pension funds. Hedge fund-of-funds assets dropped 13.7% to $26.5 billion during the same time period.

Energy and infrastructure were the only two bright spots among alternative investment asset classes in the year ended Sept. 30, P&I's survey found.

Both asset classes have had fairly steady asset growth among the top 200 funds since the 2008 economic downturn.

Energy grew the most, up 52% to $21.6 billion, due to a large fund reporting assets this year and not in the year-earlier survey. Excluding that fund — Texas Teachers, which leads the ranking with $4.4 billion reported — assets invested in energy still showed a healthy 21% increase.

The $71.2 billion New Jersey Division of Investment, Trenton, also is new to the energy top five, with its assets in the asset class up 195% to $1.6 billion, placing it third. Rounding out the top five were the $50.2 billion Pennsylvania Public School Employees' Retirement System, Harrisburg, in second place with energy assets up 51% to $2.4 billion; $57.8 billion Minnesota State Board of Investment, St. Paul, at $1.5 billion, a 2% drop; and Washington State Board, up 62% to $1.2 billion.

Infrastructure was up 16.2% in the 12-month period. Four of the funds in the top five of that ranking showed double-digit growth.

Oregon PERF replaced the $12.4 billion Maine Public Employees Retirement System, which slipped a notch even though its infrastructure assets grew 28%, to $889 million.

Another factor is the urbanization trend around the globe, Mr. Ng said.

Also, investors are looking to infrastructure in the continued drive for yield, Mr. Ng said.

For CalPERS, the primary driver for the growth of the infrastructure portfolio during the survey period was acquisitions, with appreciation also having a positive impact, CalPERS' Ms. White said in an email.

Mitsui investing up to $550 million for stake in CIM Group

Rewards for infrastructure investing come with a price