Strategies gain each year thanks in big part to QDIA designation

Another year, another solid, steady advance for target-date funds as they occupy an increasing allocation among the country's 1,000 largest retirement plans.

Among defined contribution plans in the 200 largest retirement systems, target-date funds increased to 17.7% of the total $1.96 trillion vs. 16.2% for the year-earlier period and 16% as of Sept. 30, 2014. (The P&I survey incorporates results from corporate, public, union and miscellaneous plans.)

The reasons are both varied and increasingly common: target-date funds are the most common qualified default investment alternative, younger workers are heeding the message of asset diversification and many companies are auto-enrolling new hires into target-date funds as the QDIA. 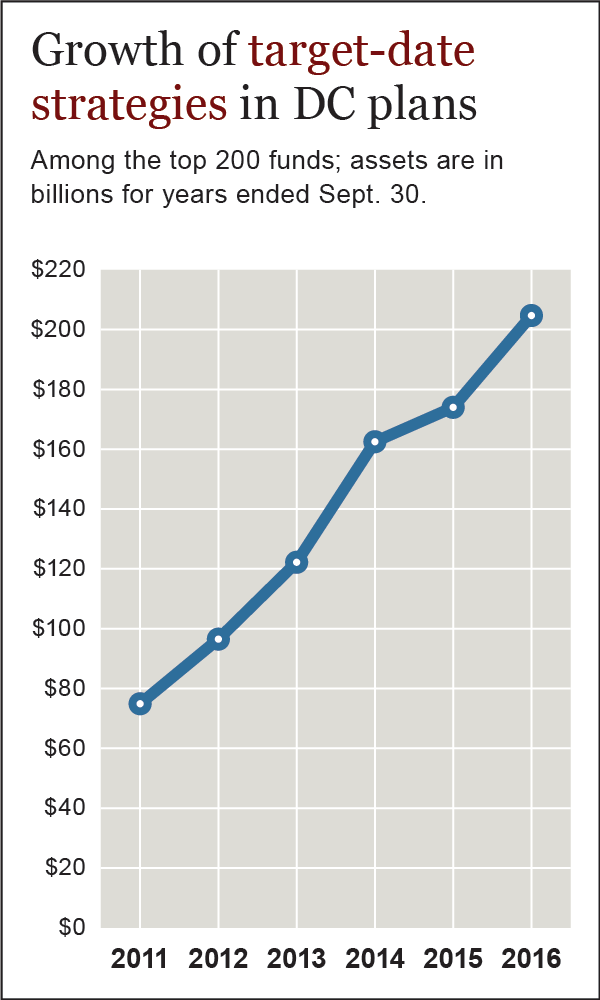 Target-date fund gains — and the potential for continued growth — appear to be so strong that a recent analysis by Russell Investments predicts the investment option could represent 70% of DC plan assets in 10 years compared with about 20% today.

Of course, target-date funds themselves have changed over time as providers offer different glidepaths, asset components and/or styles.

Sponsors are being encouraged to examine different target-date fund styles by the Department of Labor, noted Martha Tejera, project leader of DC consulting firm Tejera & Associates, Seattle. She was referring to a 2013 DOL document in which the department offered hints — not regulations and not formal guidance. “The DOL has made it clear you have to look at the glidepath to make sure it's appropriate,” she said.

Some clients of Rocaton Investment Advisors, Norwalk, Conn., are expanding the role of target-date funds by auto-enrolling participants into a QDIA or conducting investment re-enrollments, said Jeri Savage, the Rocaton partner in charge of defined contribution research.

“We are huge proponents of investment re-enrollments,” she said. “When that becomes a more common approach, target-date assets could become more than half of plans' asset allocations.”

Ms. Savage said sponsors should “pay as much attention as possible” to unique characteristics of their plans and “review if it's appropriate for participants.” That means analyzing demographics, assessing the glidepath, reviewing asset allocation and paying attention to the DOL hints to decide the best approach, she said.

Despite its growth, and projections for still greater increases, target-date funds still trail domestic equity by a wide margin in DC plan asset allocation, according to the P&I survey.

Among DC plans in the top 200, domestic equity slipped to 40.4% of total defined contribution assets vs. 41% in the year-ago period.

But a closer look at DC plan asset allocations by type of sponsor revealed that among corporate plans in the top 200, target-date funds surpassed company stock as the second-largest asset allocation.

Domestic equity remained the leader for corporate plan allocations, at 31.4%, dipping from 31.6% in the previous survey. Stable value remained in fourth place as its allocation fell to 13.5% from 14%.

For public DC plans among the largest retirement plans, stable value allocations dropped to 19% from 20.2% but still held onto second place. Target-date funds inched up to 16% from 15.8% to remain in third place. Domestic equity again was first, with 40.5% vs. 39.7%.

On the plus, the sources said they expect stable value to benefit from new regulations enacted by the Securities and Exchange Commission in October that place some restrictions on prime money market funds. On the minus side, demographic and plan design trends might work against stable value.

Target-date funds' dominance as the QDIA will “continue to eat away at stable value over the years because stable value may have been the prior default” before the Pension Protection Act was enacted in 2006, she said.

Stable value's share of asset allocation might stall or shrink, Ms. Brown said, because older employees who take their assets from DC plans upon retirement most likely had a relatively high percentage of their accounts in stable value.

Their younger replacements most likely will be defaulted into target-date funds or will choose a more aggressive equity allocation, she said. Investment re-enrollments will play a role in reducing stable value's prominence within specific plans, she added.

“Older people tend to be in stable value when they roll out of a plan,” agreed Russell's Ms. Verdeyen. “Stable value tends to be a legacy holding. Some plans have outsized allocations of stable value.”

Stock-drop lawsuits play a big role in plan executives' decisions. Although it might be cumbersome for plans to remove company stock as an investment option, she expects few plans will add company stock.

The largest DC clients of Northern Trust are stepping up their communications to participants about investment diversity and the risk of high concentrations of a single investment, said Ms. Bailey. For example, clients are targeting education efforts at participants owning more than 20% of company stock in their accounts.

During the past year, “only a handful” of clients made changes in their company-stock policy, primarily placing a cap on the amount a participant could own in a DC account, she said.

Will any QDIA do? Fiduciary duty says otherwise