During the survey period, defined benefit plans in the top 1,000 saw assets rise 4.9% to an aggregate $6.12 trillion, while defined contribution assets rose 8.6% to $3.28 trillion.

The current survey showed a large gap between the number of corporate and public funds reporting double-digit asset growth. Twenty-five of the 100 corporations in the top 200 saw their assets grow by 10% or more, while only four of the 77 public plans did. (The remaining funds are union or miscellaneous plans.) Consultants cited the generally longer duration of corporate pension funds' fixed-income programs as the reason for that outperformance.

“Public plans work under a different regulatory environment where essentially (they) are focused on total return in a portfolio,” said Sona Menon, Boston-based head of North American pensions at Cambridge Associates LLC. Public pension funds are more likely to invest in fixed income through core bonds, while corporate plans, which tend to follow a liability-driven investing approach, would hold more longer-duration bonds, she said.

While long-duration fixed income was a strong performer during the survey period, it was surpassed by the Russell 3000, up 14.96% for the 12 months ended Sept. 30. 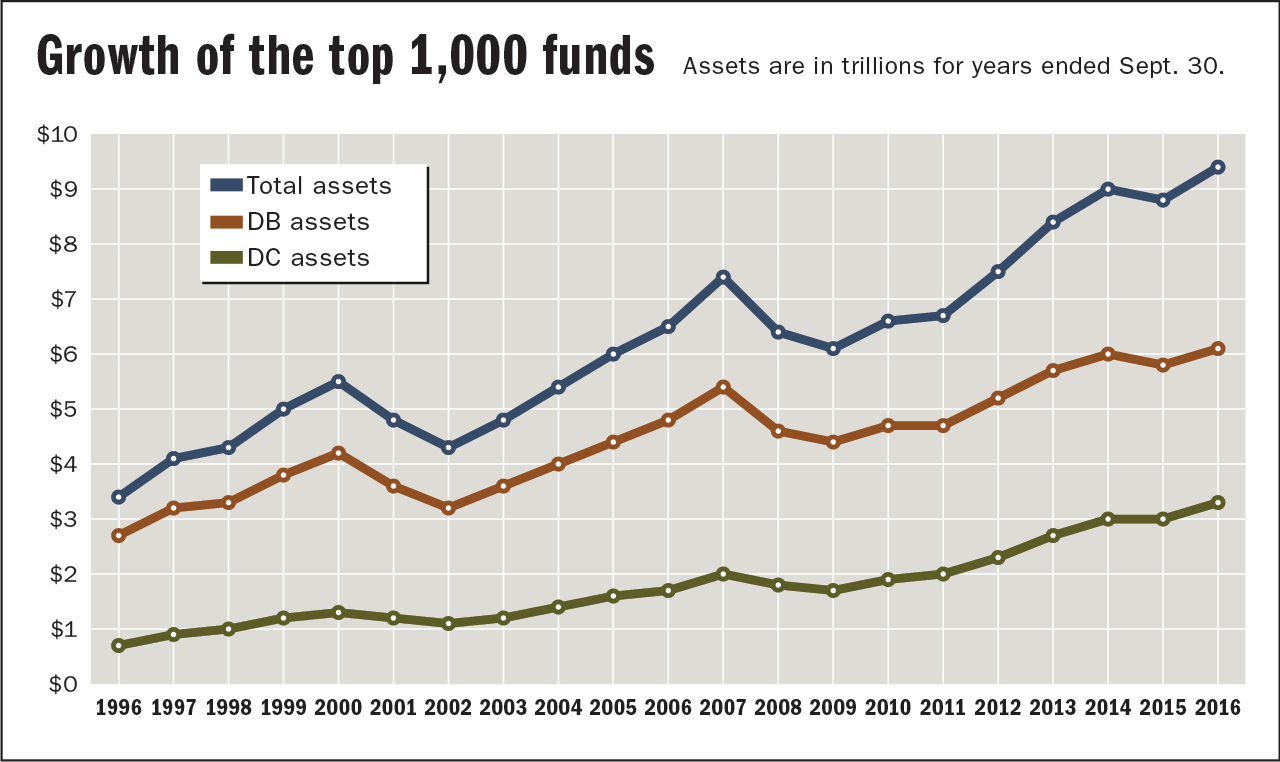 As of Sept. 30, corporate defined benefit plans within the top 200 had an average domestic fixed-income allocation of 38.8% and public funds, 20.5%. A year earlier, the allocations were 34.6% for corporate and 21.3% for public funds.

Jon Pliner, New York-based director at Willis Towers Watson PLC, cited LDI glidepaths as a possible reason for this decrease. The public equity decrease could also be reflection of increased focus on diversifying risk away from public equities in the growth portion of their portfolios, he said.

Russell Ivinjack, a senior partner at Aon Hewitt Investment Consulting in Chicago, added that fixed income's strong performance over the period also could be why corporate plans showed a boost in their fixed-income allocations.

Aside from the increased focus on liability-driven investing, another trend among corporate DB plans has been moving toward more globally focused equity portfolios by hiring dedicated global equity managers or reducing overweights to domestic equity, Mr. Pliner said.

According to Callan's Mr. Kloepfer, both corporate and public pension funds have been moving toward a more global footprint over the past three years. DB plans in the top 200 reported an average global equity allocation of 4.6% in 2016, up from 3.3% in 2013.

Another area that has seen increased interest from both corporate and public pension funds in the past three to five years has been private credit, consultants said. “In this environment, investors are looking for current income ... but fixed income is not as attractive a source as it used to be, because of where rates are,” Ms. Menon said.

Mr. Ivinjack added the current low interest-rate environment has public pension funds looking at alternative investments. “Public pension plans are total return investors trying to earn returns of 6.5%, 7.5%, 8% (or more) over the long term, and with interest rates so low, they have to moveinto new areas to meet those return expectations. And instead of adding money into equities, they are moving into an array of alternative investments,” he said.

Consultants said the increase in DC assets was unsurprising given many corporations are closing or freezing their DB plans and moving workers into DC plans.

Corporate DB and DC assets in the top 200 totaled $1.2 trillion and $1.82 trillion, respectively, in 2016, up from $1.14 trillion and $1.1 trillion in 2015. Mr. Ivinjack said strong U.S. equity performance over the survey period could also have contributed to the increase, as target-date funds and U.S. equity fund options “have a majority of DC participant assets.”

The ranking of the 10 largest retirement plans remained unchanged from last year.

The Federal Retirement Thrift Savings Plan, Washington, continued to occupy the No. 1 spot with $485.58 billion in assets as of Sept. 30, up 9.5% from the year earlier. It has ranked first since 2009, when it outpaced CalPERS.

The California Public Employees' Retirement System, Sacramento, came in second with $306.63 billion in assets, up 7.3% from the previous year.

The largest corporate retirement plan remains Chicago-based The Boeing Co. with $107.38 billion in total assets, up 5.3%, and ranking eighth overall.

Other findings from P&I's survey, focusing on defined benefit assets in the top 200, include:

Private equity, real estate victims of their own success