The pulse of emerging markets debt

Interestingly enough, this time last year, the market was questioning the sector's fundamental foundation: commodity prices were near cycle lows with oil approaching $30; emerging market currencies just posted a third consecutive year of negative returns; hard currency spreads were on the way to +500 basis points; and local yields stood at their highest levels since the 2013 taper tantrum. Not only did Brazil face a political and confidence crisis, but concerns mounted about China's growth outlook.

As 2016 concluded, a host of uncertainties emerged, including the potential for a more protectionist U.S. administration, higher U.S. Treasury yields and assurances from the Federal Reserve that it would seek multiple rate hikes in the coming years. Yet, looking forward, this backdrop also brings the prospect for faster global growth, and, combined with solid fundamentals and attractive valuations, the scene might be set for healthy returns within emerging markets debt in 2017.

While the policies of the new U.S. administration are far from certain, its interests so far do not appear consistent with the most extreme protectionist rhetoric that characterized the campaign. Therefore, our base case is not for outsized fiscal largesse, but an agenda likely to be growth positive. Indeed, we recently raised our 2017 global growth estimate to 3.4%, and our current forecast for emerging market growth of 4.4% in 2017 is notably faster than our 2016 estimate of 3.6%. 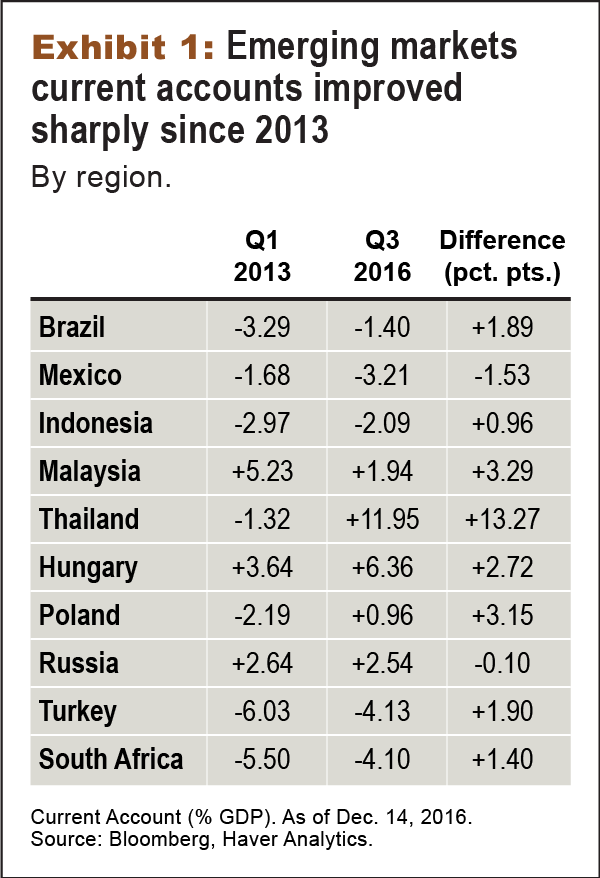 China, a pivotal element for emerging markets, remains a wild card as it transitions from an investment-led growth model to a more balanced consumption-driven growth model. There will be challenges along the way if structural reforms are not undertaken. We expect authorities to continue to use stimulus measures to counter any slowdown. We are also closely watching how officials manage through the strong U.S. dollar and the amount of capital outflows.

A more optimistic scenario is one in which China places greater focus on stability ahead of the political leadership transition at the 19th Party Congress later this year.

Against this backdrop, emerging market sovereign fundamentals — bolstered by more competitive foreign-exchange rates, less short-term debt and improved current account deficits — are generally stronger than they were during the taper tantrum of 2013, as observed in Exhibit 1.

In the local currency bond markets, yields are presently a bit under 7% and not far from the highs reached over the past five years in absolute terms (as well as relative to comparable developed market rates). In many cases, local yields are more than 100 basis points higher than pre-taper tantrum levels. Finally, emerging market currencies have started to recover somewhat from its multiyear depreciation against the U.S. dollar. While local bond performance will depend on flows, country-specific factors and emerging market currencies, we are encouraged by the recent performance of higher-yielding currencies and anticipate certain ones may perform well even if the U.S. dollar remains strong.

Risks to our outlook? 2017 will bring surprises, many of them undoubtedly in the areas of politics and policies, in both the developed and emerging worlds. Besides the roads leading to China, further increases in U.S. Treasury yields could hurt the “search for yield” within the emerging markets debt sector. That said, U.S. rates have already risen significantly — more than 100 basis points higher than the recent lows for the 10-year yield — and we believe there may be some economic and policy sensitivity to the stronger dollar that may limit further increases in long-term U.S. Treasury yields.

There is also a risk that the new U.S. administration may seek protectionist policies that are more aggressive than expected. Not only would emerging market economies be impacted, but in many ways, it would be against the best interests of the U.S. should these policies lead to notably slower U.S. and global growth. So, while the current framework may change to the benefit of the U.S., particularly with regard to Mexico and China, we do not believe these changes will completely derail global trade.

Putting this all together, we see attractive opportunities in hard currency sovereign and quasi-sovereign bonds that we believe are cheap relative to our expectations for fundamentals and events on the horizon. These opportunities include issuers in Argentina, Indonesia, Brazil and Mexico. In some cases, we see opportunities at the back end of steep yield curves, but in many instances, our positions are in five-year quasi-sovereign bonds. We also like select positions in frontier names, including Ghana, Dominican Republic, Iraq and El Salvador. We look for interest rate cuts in Brazil to help local bond positions there. Mexico local bonds should also perform well, ultimately. In emerging market currencies, we favor higher-yielding currencies such as Russia, Brazil, and Indonesia.

Cathy L. Hepworth is a managing director and an emerging market sovereign strategist/portfolio manager for PGIM Fixed Income's emerging markets team. This article represents views and opinions of the author as of Jan. 20. This content represents the views of the author. It was submitted and edited under P&I guidelines, but is not a product of P&I’s editorial team.

Returns strong in 2016 despite scary beginning

Investors mixed on how markets react to Trump

Seeing a light where others mostly predict dark clouds