For the past few years, the passive-vs.-active debate has been characterized as a pitched battle between two sides. Upon closer inspection, however, some might recognize this ongoing argument is far more nuanced than it appears at first blush and actually involves multiple sides with somewhat vague allegiances.

In fact, among actively managed funds, two distinct camps have emerged: those that favor a concentrated portfolio and those that espouse a highly diversified approach.

On one side are the actively managed funds that show a bias for concentration, building portfolios of about 25 to 40 stocks that aim to optimize returns by capturing idiosyncratic, stock-specific alpha through superior selection. On the other are those that attempt to lower risk by constructing highly diversified portfolios of as many as 200 positions that largely track the indexes and attempt to add alpha on the margins.

Upon closer inspection, the diversification puzzle is far less black and white than many portray. In fact, an efficient frontier exists in which a portfolio can hold a meaningfully higher number of stocks than most concentrated portfolios (between 80 and 160), while also delivering idiosyncratic, stock-level alpha through investments in high-quality assets marked by sound fundamentals, positive business momentum and attractive valuations. When diversification is a byproduct of rigorous analysis and bold stock picking, it can yield similar returns as far more concentrated portfolios, with lower risk and reduced volatility.

To be sure, not all active funds are created equal, and many investors and thought leaders within the allocation world have clearly recognized this issue. As a result, increasingly there has been a push among asset owners to seek out concentrated funds. Central to this trend is the belief that a fund's analytical bandwidth has limits. Indeed, many advocates of more concentrated strategies would suggest that to truly “know” as many as 100 different names — all while pursuing new ideas — is a fool's errand.

Helping to make the concentrated case appear more compelling are some of the more iconic investors who built their track record following this path: Warren Buffett, Bill Ackman and Seth Klarman. While there are certainly talented managers that can run concentrated portfolios, there are very few in the league of these names, and even fewer whose funds remain open to new investors. Conversely, many managers have tried this strategy and failed, discovering that without permanent or long-term capital the risk that comes with concentration can be untenable.

Ultimately, the question of concentration vs. diversification is far more complicated than saying if it works for one manager it will work for another.

For instance, diversified portfolios with as many as 80 to 160 holdings can offer comparable returns to portfolios comprising just 25 to 40 positions, with lower risk. By integrating quantitative capabilities with a traditional bottom-up focus on fundamentals, firms can expand both their investment universe and analytical bandwidth by zeroing in on the characteristics that drive valuations.

Recent performance bears this out.

Leigh Walzer of Trapezoid LLC, for instance, compared a sample of 70 fund managers who ran concentrated or “focused” versions of their more diversified sister funds. He found that in most cases, the so-called focused funds ultimately magnified their bad bets, offsetting any advantages of concentration.

This example could bring to mind hedge fund manager Bill Ackman, whose massive bet on Valeant Pharmaceuticals in 2015 fell by more than 75%. This anecdote also demonstrates the potential high cost of behavioral decision-making biases. For instance, “confirmation bias,” in which a manager can fall in love with a stock, an investment thesis or a management team, can have a much bigger impact in a concentrated portfolio.

However, one well-publicized blowup or a small study offering a snapshot in time are not sufficient to make the case for a more nuanced view of optimal concentration. A regression analysis recently performed by Boston Partners, however, demonstrates that concentrated portfolios, by themselves, fail to produce any measurable effect on a fund's ability to deliver alpha.

The exhibit below uses eVestment's historical fund data across a universe of more than 270 large-cap value equity funds, tracking the number of holdings of each and the corresponding information ratio (the ratio of returns above the performance of the benchmark in relation to the volatility of those returns). As the graphic illustrates, there is no connection between the level of concentration and the ability to capture alpha. Importantly, similar analysis across varying market caps, regions and strategies yielded comparable results. 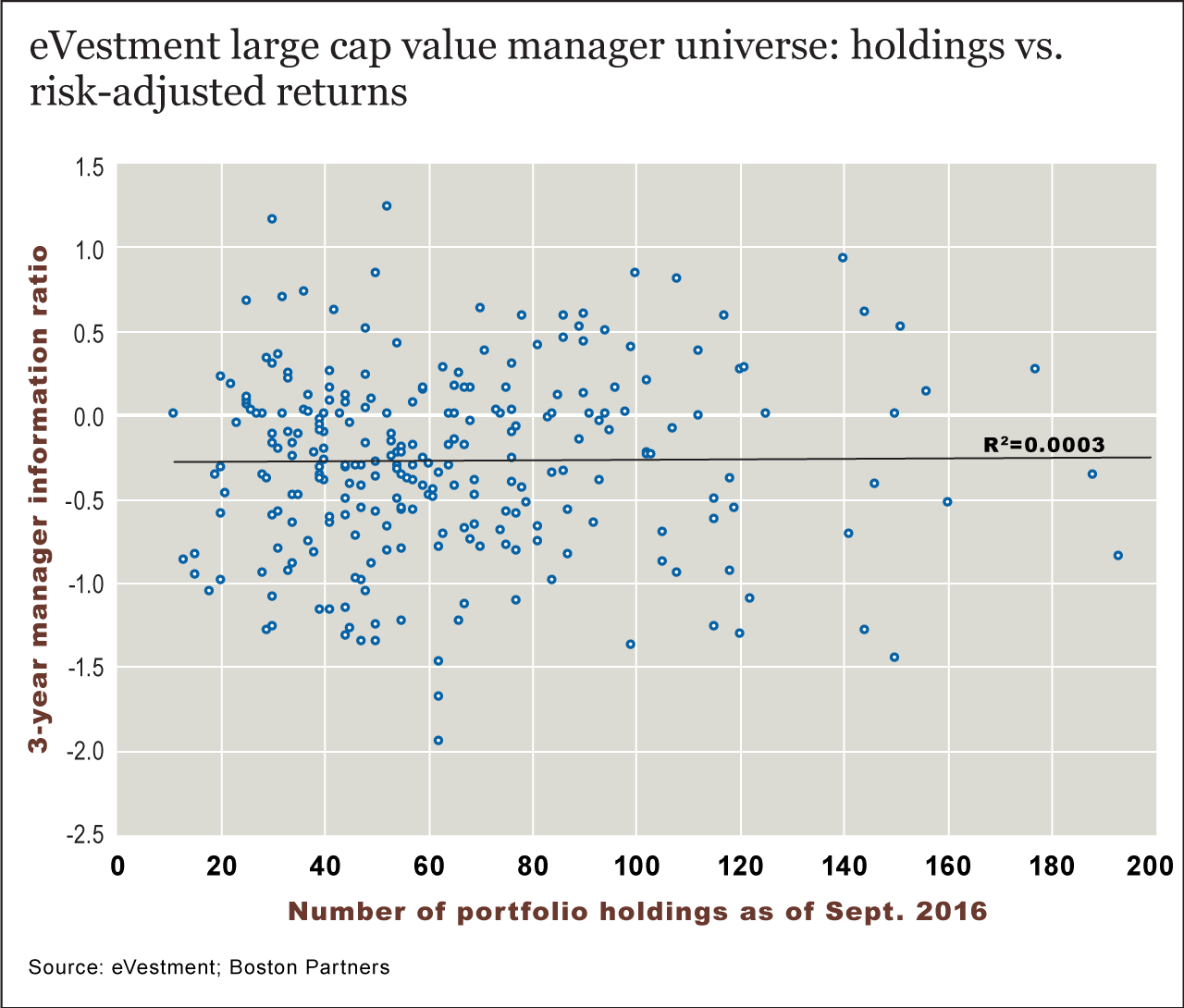 Another unintended consequence is that many concentrated funds assume unaccounted for factor risks, which can offset the potential benefits of active stock picking. For example the “Taper Tantrum” of 2013 saw high-yielding, safe stocks reverse by 900 basis points as the Federal Reserve rolled back its quantitative easing program. Furthermore, as “smart beta” has become so inexpensive and so ubiquitous, the tail is now often wagging the dog, with the performance of many stocks being driven by factor or characteristic drivers rather than fundamentals and intrinsic valuations.

So, while market “experts” battle over the cost benefit of passive investing and the death of active management, asset allocators will continue to focus on the pursuit of idiosyncratic alpha. Within the larger active vs. passive debate, perhaps the most important secondary question will be “concentrated or diversified?”

Many believe the industry has spoken loud and clear on this issue.

However, we contend that taking a deeper, more nuanced look will result in a surprisingly different answer. Very simply put, if a high-active-share portfolio of 80 to 160 stocks — selected as part of a disciplined, bottom-up research process — is enhanced by robust quantitative capabilities, a byproduct will be a portfolio with similar and perhaps better risk-adjusted returns than portfolios comprising 25 to 40 stocks. When you also consider the likelihood for added volatility sparked by discrete events such as the U.K's June vote to leave the European Union or the recent election of Donald Trump, it would be prudent to think long and hard about the actual merits of concentrated portfolios before dismissing the value diversification can bring.

Daniel Farren is a senior portfolio analyst for Boston Partners in Boston. This content represents the views of the author. It was submitted and edited under P&I guidelines, but is not a product of P&I’s editorial team.

Managers seeing volatility ahead and expect to thrive

Seeing a light where others mostly predict dark clouds

Active vs. passive: There is no debate

Greenwich Associates: Active management will survive but shakeup is expected

Are concentrated portfolios more volatile than a diversified index?

Did Buffett stack the deck?