Reprints Print
Doug Goodman
Cambridge's John Temple saw 2016 as a year of consolidation, identifying five of the top 10 deals globally as based on that single theme.

Merger and acquisition deal value in the global money management industry totaled $25.5 billion in 2016, up 18% from 2015, boosted by the Dec. 11 announcement of the biggest deal of the year: Amundi Group's $3.74 billion purchase of Pioneer Investments, the asset management arm of Italian bank UniCredit SpA.

Without that transaction, the estimated value would have totaled $21.76 billion for the year, just slightly above 2015's $21.6 billion, show data from New York-based investment bank Cambridge International Partners LLC.

Both 2016 and 2015 fell markedly below 2014's $33.1 billion, which was bolstered by TIAA-CREF's purchase of Nuveen Asset Management and the London Stock Exchange Group's purchase of Russell Investments.

“It was a bit of a gloomy year,” Cambridge President John Temple said of 2016, adding that money managers confronted long-standing negative secular trends: the shift to passive management, rising pressure from investors to cut fees and increasing regulatory costs.

Mr. Temple said that meant managers weren't playing offense in terms of M&A activity, which led to fewer transactions. Instead, managers opted for a defensive approach, looking at deals that would help them improve financial performance in a challenging environment. 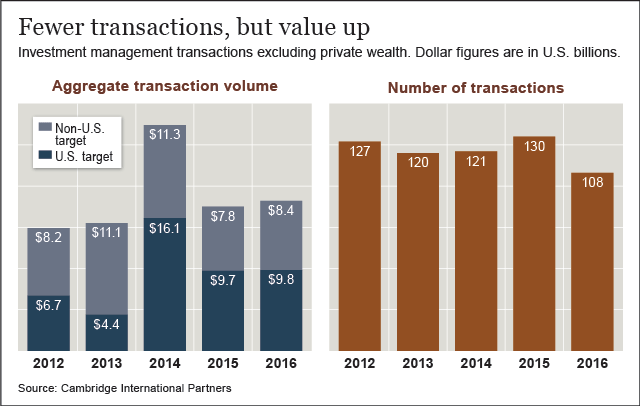 Mr. Temple said many of the M&A deals that occurred in 2016 played along two key themes: Managers looking to acquire firms with niche investment strategies not as vulnerable to the shift to passive strategies, and those firms looking to cut costs through consolidation.

Cost savings for the Amundi-Pioneer combination, buoyed by a 10-year distribution agreement with UniCredit, was estimated at $160 million a year, along with cross-selling synergies of $30 million a year, he said.

Mr. Temple said the Janus-Henderson deal is expected to result in cost savings of $110 million a year (equivalent to 15% of earnings before interest, taxes and amortization) and an “ambition” to deliver 2% to 3% of net new money through cross-selling.

“Underscoring the importance of this (consolidation theme), five of the top 10 transactions in the industry globally were consolidations, compared to, on average, just two out of the top 10 over the last five years,” Mr. Temple said.

He said private equity firms played less of a role in the largest transactions in 2016 than in previous years, although they still were active in many deals.

The improved outlook for asset management stocks after Nov. 7 wasn't necessarily a spur for M&A deals, however.

Samiye Yildirim, U.S. asset management M&A leader for consulting firm PricewaterhouseCoopers in New York, said some M&A deals that could have been in the works before the election might have lost their luster because valuations became too high after the market uptick.

Ms. Yildirim agreed a major reason for money manager M&A in 2016 was the need for cost savings among active managers to better compete in a marketplace with an increasing emphasis on passive strategies.

She said the Department of Labor fiduciary rule scheduled to go into effect in April (although it's unclear whether the Trump administration will kill the rule) is also putting pressure on money managers to achieve savings through consolidation so they can reduce fees. She said the rule will mean money managers increasingly will be subject to scrutiny by consultants and advisers over fees they charge, in addition to increased emphasis on investment performance.

After the $3.74 billion Amundi-Pioneer deal and the $2.6 billion Janus-Henderson combination, only one other transaction had a purchase price that exceeded $1 billion, Cambridge statistics show. That was the $1.34 billion deal by private equity firms Warburg Pincus LLC and General Atlantic LCC to exercise early their 2018 option to sell back the 50% stake in Santander Asset Management to Banco Santander SA in 2013.

For UniCredit, two earlier attempts to sell Pioneer fell through. The bank put Pioneer on the market in 2010 and Amundi announced a purchase deal in 2011, only to be blocked by Italian financial regulators. A deal announced in 2015 to merge Pioneer Investments with Santander Asset Management fell apart in July 2016. In a news release at the time, UniCredit said that in the face of the “absence of any workable solution” to meet all regulatory requirements to complete the merger, “the parties have concluded that ending the talks was the most appropriate course of action.”

Mr. Temple said the Amundi-Pioneer deal is considered more likely this time around because of UniCredit's financial issues. “Italian regulators are not thought to be in a position to block the deal given the urgent need to recapitalize UniCredit, of which this sale is an important component,” he said.

Mr. Temple said he does not expect large transactions like the Amundi-Pioneer and Janus-Henderson deals in 2017 because it would be hard to duplicate the complementary nature found in both consolidations.

“There are very little duplications among investment teams,” he said. “There are not many areas that overlap. There is very little loss of clients expected.”

He said Milan-based Pioneer's presence in Australia, Germany, Italy and the U.S. will complement Amundi's presence in France, Spain and Asia.

Mr. Temple said most other large managers could not do such a consolidation effectively. An example he cited was a large money manager like Franklin Resources Inc., with $714.4 billion in assets under management, which has struggled with net outflows the past several years.

“A merger could result in a cost saving, but it can also result in a huge client loss as well because of a huge investment team overlap between the acquired entity and Franklin,“ he said. “Franklin already has a investment teams in almost every strategy you can think of, so it could be very difficult for them to find a manager that they can combine with.”

More likely, he said, are smaller consolidations, such as Virtus Investment Partners Inc.'s $573 million purchase of RidgeWorth Investments, announced in December. Mr. Temple said Virtus won't tamper with RidgeWorth's multiboutique structure, so the risk of client defections should be minimal.

Another major deal in the U.S. was State Street Corp.'s purchase of active manager GE Asset Management for $485 million. The deal, which was announced in May, closed in July.

In terms of investment management, the firm's State Street Global Advisors subsidiary was mainly known for its passive strategies and its ETF franchise.

While most of GEAM's approximately $100 billion in assets under management were for General Electric Co.-related benefit plans, Mr. Temple said the deal allows SSgA to offer a broader range of investment options, including cross-selling existing clients strategies in alternatives, and active fundamental equity and fixed income.

Ms. Nesvold said she started getting calls about six months ago from foreign buyers such as banks and asset management firms interested in M&A deals involving firms specializing in U.S. active equity strategies. Interest has picked up since the November election, she said.

Investment managers focused on active equity strategies had been “unloved,” she said because it was difficult for them to beat passive strategies because market correlation has been high across many, if not most, equity sectors in recent years.

“Since the election, we have seen more diffusion in terms of stock market returns and that creates opportunities for active managers,” she said.