Money flowed to a variety of players, from the world's largest asset managers such as BlackRock Inc. and Vanguard Group Inc., to smaller but still substantial firms such as Dimensional Fund Advisors LP and AQR Capital Management LLC, company statistics show.

In the U.S., the flow into passive funds came partly at the expense of active management. Data from Morningstar Inc., Chicago, showed net outflows from active investment funds of $173 billion through Sept. 30, while net inflows into passive funds hit $326 billion.

“There is not a lot of white space left in passive land, the big platforms have a lot of distribution and manufacturing capabilities,” he said.

The biggest global platform of passive and ETF assets belongs to BlackRock, with $3.1 trillion in index assets under management as of June 30, show data from Pensions & Investments' Research Center. It was followed by Vanguard, with $2.5 trillion in index AUM; State Street Global Advisors, $1.9 trillion; and Northern Trust Asset Management, with $426.7 billion.

BlackRock has built its passively oriented ETF franchise with new strategies over the past seven years as it capitalized on its $13.5 billion deal to acquire Barclays Global Investors in 2009, Mr. Schorr said.

That deal remade the active manager by allowing it to get a strong foothold into the passive investment world, he said. The acquisition brought iShares, the world's largest ETF provider, and other passive investment strategies that had been run by BGI, into the BlackRock fold.

“It may be the best deal ever in the history of asset management,” Mr. Schorr said, even though at the time the price seemed high.

BlackRock still has more than $1 trillion under management in active funds and strategies, but financial results for the Sept. 30 quarter show a continuing trend toward passive. iShares, which holds less than 1% of its assets worldwide in active ETFs, generated $51.4 billion in net inflows in the third quarter for BlackRock, compared with only $4 billion in inflows for active strategies, BlackRock statistics show.

BlackRock, the world's largest ETF provider, had $1.26 trillion in global ETF assets under management as of Sept. 30, twice the size of the Vanguard Group, its nearest competitor with $609 billion, show Morningstar data. 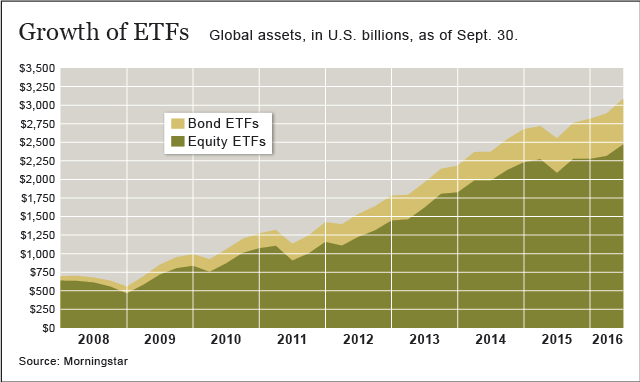 Mr. Schorr said while money managers with an almost exclusive tilt to active strategies have been seeing net outflows, BlackRock continues to prosper because of its iShares ETF business and other passive strategies.

BlackRock's net profit of $875 million in the Sept. 30 quarter was up 11% from the previous three months and 4% from the year over year quarter, show company financials.

BlackRock financials show that 30% of the firm's revenue came from ETFs in the third quarter and when adding other non-ETF passive investment strategies to the mix, the figure came to almost 40% of revenue.

ETF providers like iShares also have been able to capitalize on strong inflows this year into fixed-income ETFs.

Morningstar data show that iShares fixed-income ETFs had $61 billion in net inflows in the first nine months of 2016 compared with $16 billion for iShares equity ETFs. The inflows for fixed-income ETFs is even more significant when it is considered that fixed-income ETFs make up only 18% of iShares' $1.26 trillion in ETF assets.

He also said that during the high-yield sell-off in December 2015, iShares' $15.2 billion iBoxx $ High Yield Corporate Bond ETF was a source of liquidity for investors, showing that fixed-income ETF funds can offer investors liquidity even in tough markets.

The ultimate liquidity of fixed-income ETFs during a market crisis has become a concern for some, including the Securities and Exchange Commission, which in October adopted new rules that limit illiquid securities to 15% of the holdings of individual ETFs and mutual funds.

Globally, ETF assets reached $2.5 trillion as of Sept. 30, Morningstar data show, an 8.4% growth rate for the first nine months of 2016 from the same period a year ago.

An October report by consultant Ernst & Young said ETF growth will become even larger. It estimates assets under management in the global ETF market will reach $6 trillion by 2020.

Ranked second by P&I, Vanguard Group does not disclose profits or revenue, but the firm has been rapidly growing with its passive strategies and ETFs.

Kevin Jestice, a Malvern, Pa.-based principal and head of institutional investor services for Vanguard, said institutional flows from defined contribution plans have been strong for several years. But he said growth accelerated in 2016, as litigation by plaintiffs' lawyers against plan sponsors has increased because of the fees charged for active funds in DC plans.

“The trend in the industry is toward increased flows to target-date and index funds, and we are the beneficiary of it,” he said.

Vanguard statistics show the firm had $201 billion in net inflows into index funds in the first 10 months of 2016.

SSgA, with $1.8 billion in index strategies and $494 billion in ETF assets under management, is in the No. 3 spot, shows the P&I Research Center.

SSgA reported $12 billion in net ETF inflows in the third quarter of 2016, the company's third-quarter financial statements show. Joseph L. Hooley, chairman and CEO of SSgA's parent company, State Street Corp., noted in an Oct. 10 conference call with analysts that the ETF inflows drove a 5% corporate revenue uptick from the previous six months of the year.

“Pressure on fees is becoming more acute,” she said. “The fee pressure will continue to drive adoption of passive, when you couple that with active managers struggling, it leads people down a road.”

The DOL fiduciary rule, which is scheduled to go into effect in April, will also put pressure on 401(k) plan administrators to seek lower-cost options for investment funds, which should also increase the use of passive investment strategies, she said.

Mr. Peron said factor-based equity strategies, which use tweaks to enhance the index, have seen net inflows in 2016, another continuation of a multiyear trend.

He would not disclose exact inflows.

Mr. Peron said a combination of things is driving the trend toward passive strategies, including underperformance by active managers and increased efforts by institutional investors to cut costs.

“Starting five years ago, the interest level (in passive) started picking up, but it really it wasn't until the last two years that the adoption level has come through and we started seeing significant flows,” Mr. Peron said.

Another money management firm that has strongly benefited from the increasing trend toward passive investments is Dimensional Fund Advisors, Austin, Texas.

The firm, with $445 billion ixn assets under management as of Sept. 30, has seen $17.2 billion in new inflows in the first nine months of this year, show company statistics.

Stephen Clark, the firm's head of global institutional services, doesn't like to call the investment strategies he uses at Dimensional passive, because the value-oriented equity firm aims to top the benchmark by using factors like profitability and relative price. 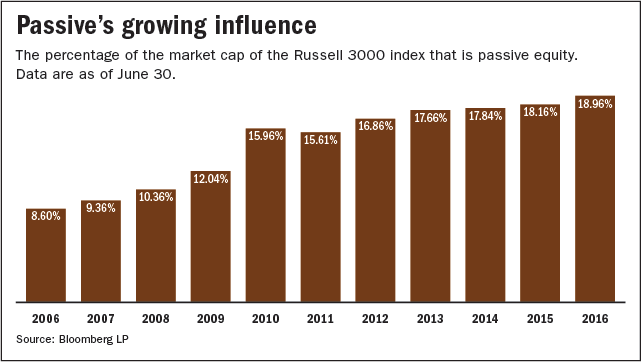 Another manager reporting strong asset growth is Boston-based money manager AQR Capital Management, which has seen its assets under management increase to $172.4 billion as of Sept. 30, up from $141.4 billion at the end of 2015. The firm does not disclose net inflows, but has seen major growth in its factor-based investing strategies.

“People have to squeeze more out of their investments,” he said.

One manager that has seen fast growth in managing passive index strategies is a relative new entry, Legal & General Investment Management America. The firm's London parent, Legal & General Group PLC is a major player in the passive market in the U.K. and Europe. Legal & General's overall worldwide AUM is$ 404.5 billion as of June 30, according to the P&I Research Center.

But the U.S. affiliate only started managing index strategies in the second quarter of 2015 and by the end of this year will have more than $15 billion under management in those strategies, said Thomas Meyers, senior managing investment partner. He said the bulk of the assets are coming not to LGIMA from active managers, but from other passive managers.

Mr. Meyers said his firm has been gaining assets by using a more transparent fee model that charges management fees as low as two basis points, for example, for a commingled fund. He said his firm does not charge add-on fees that can double or more the base fee.

“There is the perception that passive investing is a commodity, that all prices are low and getting lower,” he said.

Active managers have been buying ETF providers to get a piece of the passive or factor-based ETF market, but that road might not be paved with gold, said Boston-based Mark Michel, a partner with Ernst & Young. Mr. Michel, who helped write the firm's October ETF study, said established players might get the bulk of new inflows.

“The barriers of entry are getting much more difficult and I think partly because there are so many products out there that it gets harder and harder to come up with more innovative product strategies,” he said in an interview. “And without innovative product strategies, you're obviously competing against a number of established products out there that certainly have scale and a fee advantage.”

Established ETF players would certainly like to keep it that way.

Invesco Ltd. President and CEO Martin L. Flanagan commented on how competitors may have a difficult time in an earnings conference call with analysts on Oct. 27. He noted that Invesco's $106 billion exchange-traded fund business, Invesco PowerShares had $4 billion in net inflows in the third quarter, its second largest inflow quarter in its history.

“If the shift is toward passive as some believe, our decade of ETF experience, our comprehensive range of factor and smart beta capabilities, our scale, our significant track record of innovation, all put us in a very competitive position, “Mr. Flanagan said in prepared remarks.

He added, “There are low barriers to entry, but very high hurdles to success in the ETF business that will make it difficult for latecomers to do well.”