Growth slowed dramatically for the larg-est real estate investment managers in the year ended June 30, with worldwide assets rising only 5.5% vs. the 14.8% of a year earlier.

The jump in real estate investment trust assets, more than double the year-earlier increase, was one of a very few bright spots in the survey period. Most strategies show much slower growth.

The 5.5% growth rate for worldwide real estate assets in the survey period is the lowest since 2010, when assets fell 4.3%, Pensions & Investments' annual survey shows. 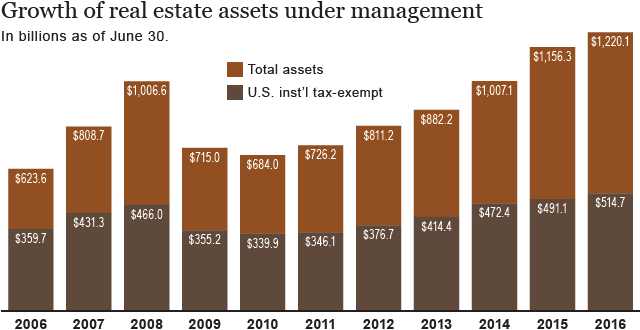 But even among many of those hot debt strategies, the largest managers saw growth rates in those categories slip. In the year-prior survey, mezzanine investments had grown 39.5% and mortgages, 45.2%.

The U.S. still appeared to be a desirable location spot for real estate investment in the year ended June 30. Total worldwide assets invested outside the U.S. were basically flat, rising a mere 0.8% to $329.8 billion, while assets invested in the U.S. for foreign clients grew 27.7% to $93.6 billion.

That is not to say U.S. tax-exempt investors left their real estate dollars at home. U.S. institutional assets invested outside the U.S. rose 5.8% to $29.8 billion.

Real estate assets managed for defined contribution plans was up 5.6% to $17.3 billion, vs. 15.5% in the year-earlier survey.

“When I look at the year leading to June 30, there was continued slow private market appreciation of real estate,” said Cedrik Lachance, director of U.S. REIT research at Newport Beach, Calif.-based Green Street Advisors LLC, a real estate research firm. The return is lower “but there's been tremendous property price growth since 2010.”

Much of the growth in assets was due to property appreciation. For the year ended June 30, the NCREIF Property index returned 10.64%. The 5.56% return from appreciation was higher than the income return of 4.88%. Indeed, income return has been trending down since 2010 because property values have been outpacing income, NCREIF analysis shows.

However, the returns are lower than the year-earlier period, when the NCREIF Property index return was 12.98%.

The growth in REITs also was propelled by return. The total return of the FTSE NAREIT All REITs index, which includes equity and mortgage REITs, was 22.68%, while the total return of the FTSE NAREITs All Equity REITs index, which excludes mortgages, was up 24.04%, according to data provided by the Washington-based National Association of Real Estate Investment Trusts.

“The private markets appreciated and the public markets took it even higher,” Mr. Lachance said.

Not included in the rankings again this year is Blackstone Group LP, New York, which tracks its data in a different way from P&I's method. But Blackstone executives did provide some information. As of June 30, Blackstone real estate's worldwide AUM — defined as equity value net of leverage and unused capital commitments — totaled $103 billion. One third of the capital is from U.S. institutional investors.

Jack Gay, Charlotte, N.C.-based managing director and global head of commercial real estate debt at TH Real Estate, attributed his firm's increase to continued low interest rates, which drove investors' search for additional yield. “It's been a long real estate cycle,” Mr. Gay said. “The real estate cycle is certainly aging and so investors are conscious about where values are.”

On the equity side, PGIM continued the trend it began last year — selling as many properties as it has been buying, noted Eric Adler, CEO of PGIM Real Estate. “Last year was balanced between net buying and net selling. It's the same this year,” Mr. Adler said. “It's interesting the amount of money wanting to go after large stabilized core assets.”

There have been a number of core deals, especially in the U.S., he said. However, he added that transaction activity in the U.K. stalled after British citizens voted to leave the European Union in June. “Money was waiting for the Brexit vote, which they thought would go the other way. Brexit threw everyone for a loop,” Mr. Adler said.

While inflows and outflows were fairly close, some of JPMAM's larger clients reduced their positions in J.P. Morgan Asset Management's large open-end core commingled funds as a rebalancing move, he said.

“The growth was due to a combination of inflows and appreciation as well,” Mr. Azelby explained. “We saw everything from the traditional pension funds still adding to their core real estate allocations and we still see investors that are relatively new to the real estate space coming into our real estate funds.”

JPMAM has also had some success with very targeted real estate strategies the firm offers to larger, more sophisticated investors, he added.

Mezzanine assets managed on behalf of U.S. institutional tax-exempt clients spiked during the survey period as a result of investors' search for yield, managers said.

“Lower global interest rates and aging populations that have a need for income are all creating a natural demand for income-oriented investments that mezzanine and mortgages can provide,” said David Durning, CEO of PGIM Real Estate Finance, PGIM's credit business.

PGIM's mortgage assets rose 5% to $16.1 billion, but its mezzanine assets dropped 31%, to $285 million, because of a reorganization of the firm's mezzanine business, Mr. Durning said.

“Our mezzanine activity is relatively small. The group sits between PGIM Real Estate and our organization,” he noted.

“We have a new person and we are putting together a new (mezzanine) strategy,” Mr. Durning said.

During the survey period, PGIM hired Stephen Bailey to head the mezzanine team, which is a joint strategy of PGIM's real estate equity and real estate debt businesses, he explained.

However, investors do not wish to take on as much risk by investing in development projects and higher loan-to-value mortgages as they did at the height of the last real estate cycle, he said.

This is driving investment in certain type of mezzanine and other real estate debt strategies, he said.

Mezzanine assets also rose in part because during the survey period TH Real Estate deployed new mezzanine capital from an existing separate account with the Korean Teachers Credit Union and the firm has increased the size of the separate account and extended the investment period, Mr. Gay said.

Overall U.S. institutional, tax-exempt mortgage assets grew 4.2% to $61 billion, with the 10 largest managers of mortgages accounting for 92% of the total. n 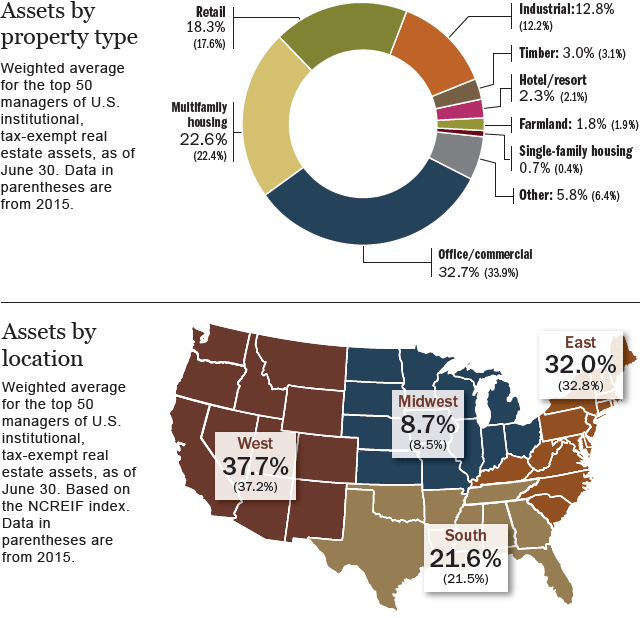 Which real estate market is next?

Double-digit returns carry REITs to the head of the class

Double-digit returns carry REITs to the head of the class