The mixed blessings of smart beta

“Neither smart, nor beta.” This recent description by Andreas Utermann, Allianz Global Investors' chief investment officer, flew in the face of what is fast becoming the most fashionable topic in asset management.

Assets under management globally in smart beta strategies have grown more than 45% annually since 2013, standing around $440 billion today. Precise definitions vary but, broadly speaking, the approach aims to offer an alternative to traditional market capitalization-weighted indexes, allowing the flexibility to emphasize attributes other than size. So, for example, an S&P 500 smart beta fund tilted toward a value style might hold its largest position not in Apple Inc. (at $545 billion, the index's largest constituent) but Transocean Ltd. (which at 2.8x has the lowest price-earnings ratio).

We understand Mr. Utermann's caution. We do not think that smart beta's ingenuity automatically makes it superior to conventional cap-weighted strategies, neither do we think it is a substitute for active management. Most of all, we believe smart beta actually involves significant complexities, rarely engaged with, that belie its simple definition.

The first of these relates to how exposure to the specified metric is actually implemented. To construct a smart beta portfolio, the top 30% of a conventional index (e.g. the FTSE 100) would usually be filtered according to the specified “signal” — for instance P/E ratio, momentum, volatility. This subset could then either be weighted by capitalization or by strength of “signal.” The latter means that the proportion invested in each stock would be determined by the strength of its performance in the metric that was originally used to filter the index. Cap-weighting and signal-weighting will have divergent effects on the portfolio's risk/return profile and it is therefore essential to understand fully the relevant differences.

To try to give more clarity on this matter we have hypothetically back-tested the performance of value and momentum smart beta strategies against the MSCI World index (Figure 1). From this, it is noticeable that a significant return disparity exists across the different timeframes and methods. Signal-weighted value over the full time period has delivered the most alpha, far more than if the strategy had been cap-weighted. Momentum, on the other hand, has been superior on a signal-weighted basis for the full sample, but on a cap-weighted basis over the last five years. In short, based on our back test, buying smart beta does not absolve the investor from thinking about portfolio construction, but instead just presents a different set of choices, the outcomes of which are equally difficult to predict.

The second complexity that is often overlooked is the extent to which the portfolio accurately reflects the desired factor. Figure 2 shows the exposure of the value portfolios in Figure 1 to value metrics as defined by Barra, a factor analysis system. The chart illustrates the significant variation that can be caused by just small differences in the parameters used to define a particular exposure. Smart beta may potentially deliver returns that are inconsistent with the investor's expectations for a particular style tilt.

Investors can also be ill-prepared for the volatility that smart beta can entail relative to conventional passive investing strategies. As a portfolio attempts to restrain factor exposures it will likely reduce diversification. This may well be reflected in heightened tracking errors and drawdown behavior. Such a trend is reflected in our data where excess maximum drawdown for the signal-weighted value portfolio over the full time period (which generated the most alpha) was 94%. Given the relatively large magnitude of these peak-to-trough losses, smart beta investors are potentially exposed to greater behavioral risks and timing issues than traditional indexing strategies. 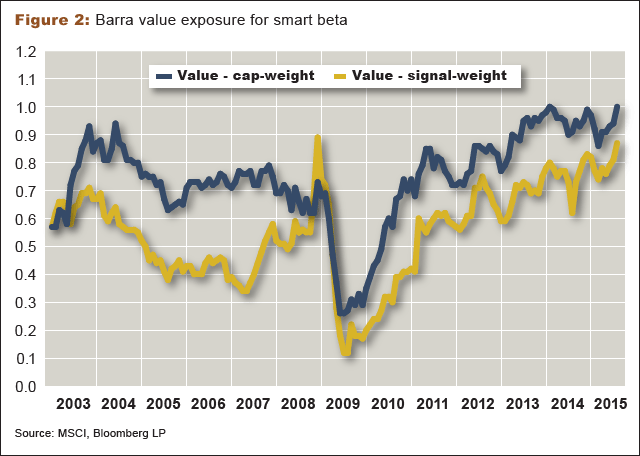 A third complication exists in implementation: costs. The full impact of this has not yet been felt as smart beta AUM is still relatively small, and thus remains nimble enough to help contain the effects. As a strategy grows, however, it has the potential to become more complicated, and thus more expensive, to implement. A rough heuristic used in academic literature is that fund administration costs increase by the square root of growth in trading volume. Applying this measure to the signal-weighted portfolios we constructed in Figure 1 over the full time period, we modeled the effect as AUM increased. We found that for every $1 billion added to assets over the $1 billion mark, alpha was eroded by 0.11 points for value and 0.19 for momentum. From this data we are concerned that, should smart beta continue to enjoy similar levels of growth, returns may be eroded by increased costs.

A final difficulty is in determining how best to use multiple smart beta portfolios in tandem: grouping is desirable from a diversification standpoint. Figure 3 shows the information ratios of the smart beta strategies we created in Figure 1 as well as two more (circled in orange) being the equal-weighted combination of value and momentum, on both a cap- and signal-weighted basis. As can be seen from our historical simulation, these blends do a good job of enhancing the upside, while limiting the downside, of excess risk-adjusted return. Simplicity, however, is sacrificed for this augmented performance. While a conventional passive investor must make decisions on size, geography and (sometimes) sector, someone buying smart beta must add style to this list, an altogether more nebulous proposition. In this article we have focused on just two styles (value and momentum), but we could have chosen numerous others (such as quality or volatility). Indeed there is no limit on the definition of a style. In theory, even factors as esoteric as number of cars in retailers' parking lots could qualify. So although smart beta combinations might have the potential to enhance performance, calibrating the groupings correctly generates new complexities. 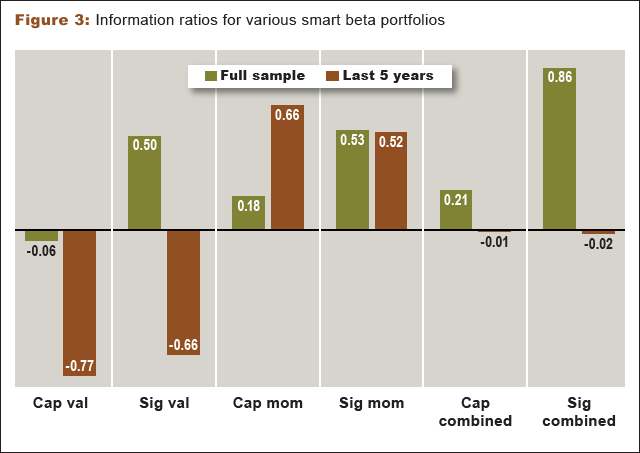 Active quantitative management differs from smart beta in that it does not limit the number of factors it seeks to define and incorporate into its models. Smart beta is a well-packaged idea, complete with a catchy title and slick marketing, but we feel it may not be as conceptually contained as it first appears.

In our opinion, properly investing in the area involves making (either consciously or subconsciously) decisions across all the issues we have described and, Hydra-like, as one consideration is removed, two more may replace it.

We think investors might have the potential to benefit by considering active quantitative managers to help deal with the hidden complexities to which they might otherwise fall victim.

Jayendran Rajamony is a portfolio manager and researcher, and Artemiza Woodgate is a quantitative researcher, with Man Numeric in Boston.