Some of Europe's economic vital signs appear worse now than in March 2012, when Greece defaulted on its sovereign debt. Productivity growth during 2015 fell to 0.8% per year from a persistently low level (average of 1.8% from 2010 to 2012). Policy uncertainty in June 2016, according to one well-known academic measure, increased relative to the 2010-2012 average by nearly a factor of two. Growth and unemployment have improved slightly but remain depressed, and expectations remain low.

Asset allocators might not want to rely on policymakers to nurse the economy back to health, at least in the near term. Average “fiscal space,” a metric that tries to quantify European governments' balance sheet fitness, has deteriorated in the EU since 2012 (see Figure 1). If this trend continues, policymakers might have limited resources to stimulate the economy and to absorb future financial shocks. As a result, the market might expect higher credit default risks that further stress Europe's economic health, creating a deteriorating cycle. Brexit represents an additional symptom, and its sudden appearance makes Europe's health issues appear more acute. However, Europe's sickliness extends well beyond the U.K.'s vote to leave the European Union.

Worsened on average since 2012

International Monetary Fund and academic researchers created the concept of “fiscal space” because traditional metrics of debt sustainability, such as debt/GDP, do not directly account for cross-country political and institutional constraints (e.g., policymakers' ability to raise taxes and tax collectors' ability to fulfill their responsibilities). Fiscal space, which measures the number of tax years required for a country to pay off its public debt, incorporates some of these issues by looking at historical levels of tax receipts normalized by economic output. 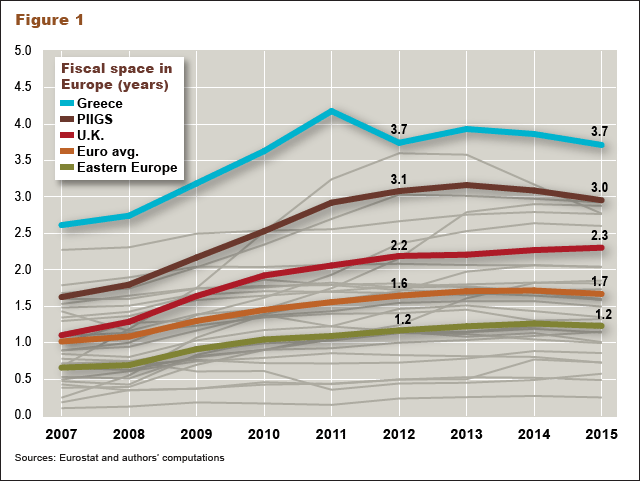 Figure 1 plots the fiscal space of 29 European countries since 2007. Between the beginning of the financial crisis in 2007 and 2012, the unweighted average number of tax years required to repay public debt increased by nearly 61% across Europe, signaling an overall rise in fiscal fragility. Greece's default in March 2012 helped improve the country's fiscal outlook, but it did little to improve Europe's. Since 2012, the European average has increased an additional three percentage points, particularly in the “non-PIIGS” countries that felt less external political pressure to solidify their balance sheets.

The economies along Europe's eastern edge exhibit less fragility (i.e., lower fiscal space) than the larger economies in Western Europe, owing to relatively higher growth and smaller debt burdens. This disparity might increase over time if Western European governments do not implement reforms to revert to more stable fiscal and growth paths. Slower growth following Brexit might worsen the degree of fiscal space in the United Kingdom (2.3 years as of 2015), a country where fiscal space doubled since 2008, when it implemented a bailout program in response to the financial crisis.

Fiscal space matters to the market

A country suffering prolonged fiscal stress, potentially unable to commit to its obligations and to support further extraordinary expenses (such as during a banking bailout), threatens its solvency. Credit default swaps appear to price in this risk, at least to some extent. A linear regression shows that more fiscally strained countries suffer higher credit default risk (Figure 2). Plotting changes in credit default risks appears to tell a similar story. The statistical relationship might highlight the market's concerns that global policymakers will prove unable or unwilling to backstop sovereign debt as they did in 2012. 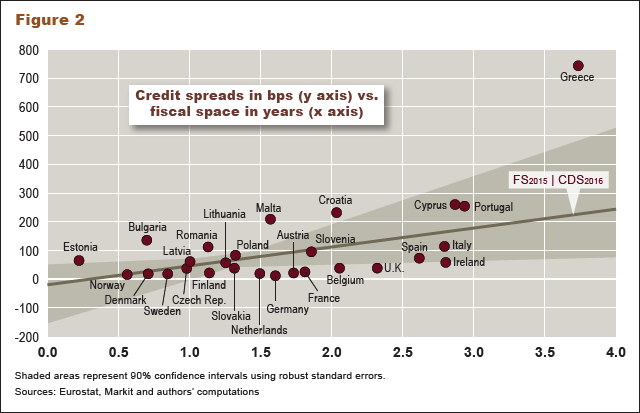 The continued deterioration of the fiscal health of many European countries might not pose as imminent or as acute of a financial risk as Brexit, but it remains a concern. Fiscal policymakers might find that they lack the flexibility to stimulate their economies during periods of economic stress. If the market continues to respond to worsening fiscal space by widening credit spreads, it might spur an unhealthy feedback loop that makes countries' debts even more challenging to manage. With interest rates low and in some cases negative, the option set available to monetary policy makers during a crisis also appears sparse. Europe might instead hope for productivity improvements or other sources of long-term growth, but the trends in these metrics have not offered many reasons for optimism. Brexit likely only makes the problem worse.

Opinions expressed in this article are the authors' only.