Investors on both sides as firms sell to each other

Private equity investors are watching their capital flip from the distributions side of their ledgers to the capital call side for the same portfolio companies, as close to a third of exits are sales to other private equity firms.

The percentage of private-equity-to-private-equity sales has been growing steadily, reaching 31% as of Aug. 2, from 25% in 2010, show data from London-based alternative investment research firm Preqin. These exits are second only to sales to strategic buyers and far outstrip initial public offerings.

This affects investors who have capital committed to managers on both sides of the deal, industry executives say. These limited partners have transaction costs by both the buyer and the seller; they are exposed to the portfolio companies longer than either of the general partners; and, after the sale, they are invested in the company at a higher cost basis than they were with the original general partner.

Investors are keeping their eyes on the trend.

Officials at the $14.1 billion New Mexico Public Employees Retirement Association, Santa Fe, question general partners on whether selling to a larger private equity firm or another private equity firm investing in the same industry is part of their exit strategy, before committing to their funds, said Jonathan Grabel, chief investment officer.

Consultant Michael Moy said, “the concern (with private-equity-to-private-equity deals) always was that if I invest in the GP and he turns around and sells to another GP who I am also invested with, I still own the company but at a higher cost basis. The second private equity firm bought the portfolio company for more money than the first GP.”

Mr. Moy is a managing director and member of the board of directors with alternative investment consulting firm Pension Consulting Alliance LLC, who is based in Mission Viejo, Calif.

But it's not just small deals that are being traded between private equity firms. In the largest buyout deal of the second quarter — the $4.4 billion buyout of MultiPlan Inc. — the health-care information technology company was sold to a consortium of Singapore's $300 billion sovereign wealth fund GIC, Hellman & Friedman and Leonard Green & Partners by a group that included private equity firms Ardian, Partners Group AG and Starr Investment Holdings LLC. Ardian, Partners Group and Starr Investment had purchased MultiPlan from private equity firms Silver Lake and BC Partners in 2014.

Three of the largest 10 buyouts in the quarter were private-equity-to-private-equity secondary buyouts, according to Preqin. It is not unheard of — even these days when investors are committing to fewer private equity firms — for limited partners to have exposure to both sides of the deal.

In one instance this year, Pensions & Investments identified four asset owners with exposure to the private equity fund that was the likely purchaser and the fund that was the likely seller on one of the deals: the $1.4 billion sale of software company Vertafore Inc by TPG LLC to Bain Capital LP and Vista Equity Partners. The pension funds are the $178.1 billion New York State Common Retirement Fund, $43.8 billion Illinois Teachers' Retirement System, $20 billion San Francisco City & County Employees' Retirement System, and $14.2 billion Los Angeles City Employees' Retirement System.

For limited partners with investments in both managers, the exit is not really an exit, acknowledged LP Capital's Mr. Waldrop.

“If you are an LP and have a distribution, then someone will call the money anyway,” he said.

“You have to look closely at what is being promoted as the idea behind the acquisition of the portfolio company to see if it actually occurs,” PCA's Mr. Moy said. As portfolio companies pass from one private equity fund to another, “It's kind of like moving chairs on the deck of the Titanic,” he said. “You don't want to be around when the ship goes down.”

These days more limited partners are expected to have to face the issue as private-equity-to-private-equity deals are up and the hold time for portfolio companies of firms that sell to other general partners is down, according to research firm PitchBook Data, Seattle.

“We are seeing a lot more deals trading hands from private equity to private equity,” said Nizar Tarhuni, a senior analyst in the Seattle office of PitchBook. 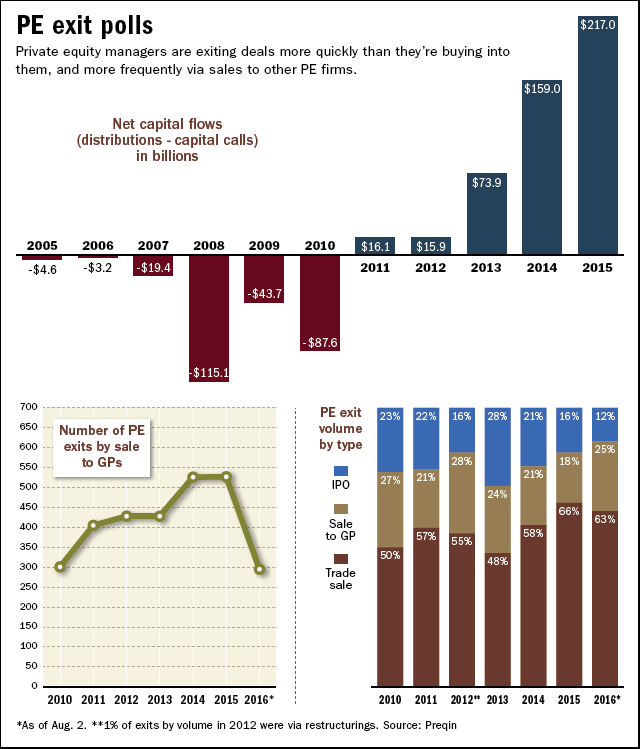 Portfolio company hold times for middle-market secondary buyouts this year is 4.1 years, down from 4.7 years last year and 5.5 years in 2014, Mr. Tarhuni said.

“It happens frequently. LPs are stuck with transaction fees in the middle of it,” he said.

Across the entire private equity landscape, private-equity-to-private-equity hold times are down to 4.4 years from 5.4 years in 2015, PitchBook data show.

“If the current fundraising pace were to hold through the rest of the year, 2016 will have raised more capital for the (private equity) asset class than any year since 2008,” the report noted.

How a swapped portfolio company will end up affecting investors' portfolios depends on what happens when the last general partner to buy it ends up exiting the company, Mr. Waldrop said.

“If the next guy can grow and sell, you can do well,” Mr. Waldrop said.

“Generalist private equity firms are not the best owners of portfolio companies at this point of time,” he said. “Specialists could better handle an external shock.”

Investors say that general-partner-to-general-partner sales are inevitable, especially as they invest more capital with fewer managers in different segments of private equity. But few are completely happy about it.

“We have seen some portfolio companies sold from one of our partners to another,” said Bob Jacksha, chief investment officer of the $11.4 billion New Mexico Educational Retirement Board, Santa Fe, in an e-mail. “Because of the transaction costs involved ... that is not ideal.”

However, it is to be expected “as our partners invest with differing strategies and in companies that are at different stages in their life cycle and the funds themselves are in different stages: investing, harvesting or wind-down.”