The immediate shock from the U.K. vote to leave the European Union has been replaced with what many believe will be long-term pain for pension funds as government and corporate bond yields plunge as a result of the referendum.

“We may have a multiyear period of rates that will be far lower than seen historically,” said Tony Rodriguez, managing director, co-head of fixed income, Nuveen Investments, Minneapolis. “That will impact liabilities negatively.”

For pension executives, that means some sudden rebalancing of their asset allocations to try and eke out return in an attempt to mitigate the ensuing rise in liabilities.

“We're pursuing our convictions to a greater degree,” said David Holmgren, chief investment officer at Hartford HealthCare, Hartford, Conn., with $3 billion in pension, endowment and other assets. “We're forced because of the liability question to go further off the beaten path and to protect yield as best we can. This has pushed us to the extreme.”

Mr. Holmgren said the June 23 Brexit vote led to a “double whammy” for pension funds — a decline in yields in U.S. Treasuries on which some discount rates are pegged at a time when equity returns are minimal.

What happened to institutional investors “is a dichotomy,” Mr. Holmgren said. “A drop in the discount rate means the need is greater. But the time to derisk becomes a time you have to rerisk. Brexit means there's a holding pattern on risk, and then you have to step out of the liability side and look at the investment side. You can't possibly derisk with costs through the roof, but you don't see an increase in return as the expected growth decreases. So now it gets to the investment office: what's the result?” 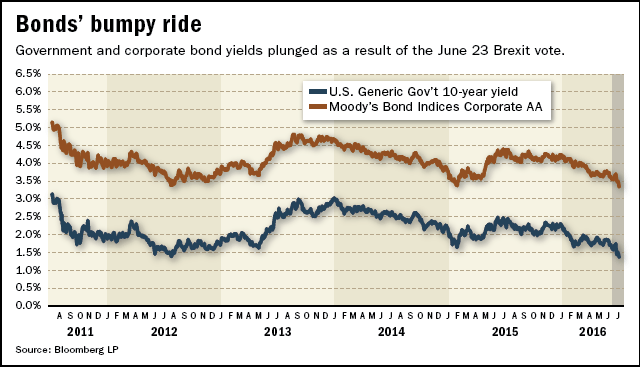 Corporate fixed income hasn't fared much better. According to a Moody's Analytics report, the long-term average investment-grade corporate bond yield, used to set the discount rate for corporate pension plans, was 3.62% on July 5, trailing each previous monthlong average since 3.58% in August 1956.

Also, corporate funding indexes cited Brexit as a major reason for the increase in liabilities and subsequent declines in funding ratios at the end of the second quarter. Reports early this month from Mercer LLC, Bank of New York Mellon Corp., UBS Global Asset Management and Legal & General Investment Management America all showed a range of declines in aggregate funded status of 2 to 3 percentage points, with average funding ratios for the second quarter of 77.4%.

“The events in June provide a reminder of how quickly pension funded status can move when there are shocks in the market,” said Matt McDaniel, a partner in Mercer's retirement practice. “In the two trading days following the Brexit vote, we saw funded status fall a full 4 percentage points before a partial recovery before month-end.”

Added David Wilson, managing director of the institutional solutions group at Nuveen Investments LLC, Chicago: “When you have an event like Brexit, U.S. Treasury is usually the flight-to-quality asset class, which then drives yields up and liabilities up, and by itself that will lower a plan's funded status. But Brexit had two-pronged volatility. Most plans are exposed to equity beta, and the market volatility immediately after the Brexit vote fueled an equity decline, which also temporarily hurt funded ratios.”

Mr. Rodriguez at Nuveen said he doesn't see those equity returns increasing anytime soon. “We think we're in a single-digit-return world and will be for some time,” he said. “We're not in the camp of those that think that there'll be a negative market correction, but we're also not likely to see 10% or more returns. That's another hurdle facing plan sponsors.”

Michael Arone, Boston-based managing director and chief investment strategist in State Street Global Advisors' U.S. intermediate business group, said that while Brexit has made a bad yield situation worse, interest rates have been in decline for a long time and, coupled with mediocre equity returns, already have made plan funding more challenging. The response by plans in recent years has been moves toward liability-driven investing strategies and investments in hedge funds, which Mr. Arone said probably won't help mitigate the potentially growing funding shortfall.

“Pension plans generally have a 7.5% rate of return, and now Treasuries are at 1.4% and going down. That's already a 500-basis-point disadvantage,” Mr. Arone said. “And hedge funds have moved on to strategies that look more like bond funds to cater to institutions. So the real question is, what can you do? The solutions here are not easy.”

Nuveen's Mr. Wilson said pension plans have three ways to react: Contribute more to the pension plan to cover liabilities; increase LDI programs, with Brexit serving as kind of a last straw for plan sponsors who've “time and time again been burned by volatility”; and delay derisking and become overweight in equities — “but if you have another period of volatility, you'd be multiplying those earlier liability problems.”

Mr. Arone suggested that pension funds look to invest small amounts of assets in “low-probability, high-payoff” investments as a “creative approach to help fill in the funding gap, though that will mean taking on more risk.” That's been what Mr. Holmgren at HHC has done, this month committing $90 million to Actis Energy IV, a London-based private equityfund investing in African power generation and energy distribution. He said it's an example of moving “off the run” to find steady income in a less correlated asset class.

“We're trading out core fixed income and taking more independence in finding return-seeking assets, looking now at more illiquid investments and in frontier markets. That's all a result of Brexit,” Mr. Holmgren said. “Here's the irony of this — Brexit forces more investors to become more global. ... We thought we had a quarter or two to study exposure to frontier markets. We no longer have the time. We have to act now.”

Brexit “forces everyone in investment offices not to change their policies but to rebalance,” Mr. Holmgren said.

“That's being done across the board at investment offices everywhere. ... You've got to batten down the hatches and stick to your convictions.”

The funding issue — combined with the low-rate environment — has led some corporate plans to issue bonds and use proceeds to make pension plan contributions, as recommended in a Bank of America Merrill Lynch analysts report earlier this month. According to Bloomberg, 34 corporations had a combined 69 issuances from the start of the year through July 7 to fund pension contributions.

However, that could create a Catch-22 for those corporate plan sponsors, said Daniel Westerheide of Segal Rogerscasey in Boston. “If you're looking for a possible windfall to borrow, you might also be buying bonds,” said Mr. Westerheide, senior vice president and co-head of beta, asset-liability management and risk management.

Mr. Westerheide said his firm is counseling its LDI clients to remain on their glidepaths but invest more in credit if their specific investment strategies allow. n

After the Brexit vote

Private equity investing in EU just got a lot harder