London's standing as the financial center of the globe is potentially under threat as a result of the U.K.'s decision to leave the European Union, but money managers are hopeful their business will emerge relatively unscathed.

Still, risks to the money management industry exist, and all eyes will be on the terms of a deal still to be hammered out by the EU and the U.K. government regarding the country's unprecedented exit from the union.

“When it comes to the impact on London's standing as a center for asset management, then of course the impact may not be felt for many years,” said Dan Kemp, Europe, the Middle East and Africa chief investment officer of Morningstar Investment Management, based in London. “If the status of London is downgraded, then it is more likely to be a gradual erosion than a big bang.” But any Brexit-related conclusions must not be taken as certain because “there are so many different directions it can go in at this stage,” he said.

Mr. Kemp said London's resilience as a financial center can be split into five “economic moats,” one of which is intangible assets — branding — which he thinks is “one of the areas most challenged by Brexit. People are starting to think about whether London's brand has been tarnished by Brexit, and whether actually that source of resilience for London, which was very strong a little while ago, is diminishing.”

Global money managers already are asking questions regarding their future operations. “Our clients, global asset managers, certainly have been reaching out to our entire platform with strategic and operational concerns following Brexit,” said Benjamin F. Phillips, principal, investment management lead strategist- consulting at Casey Quirk by Deloitte, based in New York. “The operational concerns are top of mind and similar to those any global firm with a U.K. footprint faces,” such as what happens to key talent in London and how systems will need to be adapted. “Our colleagues are already neck-deep in these questions” and others regarding regulation.

One particular issue involves how the so-called passporting clauses contained within EU regulations, such as the Alternative Investment Fund Managers Directive, are affected. Passporting is the ability of money managers to market or sell their strategies across the EU with a single product, rather than creating jurisdiction-specific offerings. The understanding among London-based sources is that under current EU rules, a money manager that wants to distribute strategies in the EU would need to have money management executives based there. 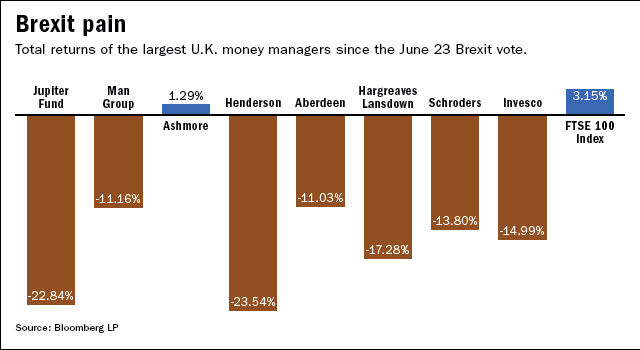 Mr. Phillips said London will remain a capital for money management thanks to talent, and will stay a core currency and commodity trading market. But clients are turning to larger strategic issues. “Many of the global asset managers already have built growth strategies around the fact that the U.K. and the Continent are distinct asset management markets — separated by currency, local regulation and local product preferences even before Brexit.” But what will change, he said, is that global money managers will require more local infrastructure on the Continent to succeed. “This will force them to determine what extra resources they need in order to win in European fund management going forward, and potentially lead global managers into a broader question of how to prioritize markets. Some, not all, will decide to invest less in a London footprint as a result,” he warned.

And Brexit could become more disruptive to the European project by blazing a trail for core continental markets to vote to leave. “Let alone the capital markets disruption this could unleash, further "eurexits' would make gathering European assets less profitable for many non-European asset managers, unless they have the differentiated offer or scale required to truly stand out,” said Mr. Phillips.

“What clearly is going to be up for grabs in the discussions is what you give up if you want to restrict freedom of movement (of people,)” said Saker Nusseibeh, CEO at Hermes Investment Management, based in London. “I think we will have to give up certain things. It may be that passporting (of financial products) becomes more difficult — and if that is the case we stop being covered by (the Markets in Financial Instruments Directive II) anyway — and it may be that some asset managers need to move to European soil.”

Mr. Nusseibeh noted New York was pre-eminent in financial services prior to the Sept. 11, 2001, attacks. “For perfectly understandable reasons, the U.S. looked inward. That left a vacuum, and we in London stepped up and grabbed that. Naturally, as the (U.K.) government starts to look internally, someone else will come and grab that. That will probably be New York again,” he said, with some business also shifting to the Continent.

“I can see attractions in Dublin, maybe for the (Undertakings for Collective Investments in Transferable Securities) business, where so much is European-based that it will be interesting how that pans out,” said Lisa Cawley, a corporate partner in London at Kirkland & Ellis LLP. She expects London to remain the financial center of Europe, however.

Pat Lardner, CEO at the Irish Funds Industry Association in Dublin, said there has been an increase in traffic to the association's website over the past few weeks, but he expects London to continue to have an important role as a financial center. “I think there will be a greater call on us — given the breadth of funds and services we have — to provide more funds and solutions.” Of the e3.6 trillion ($4 trillion) of assets under administration in Ireland is split about evenly between strategies domiciled and serviced in the country, and those not domiciled in Ireland but serviced there.

Similarly, Luxembourg is an important country in the situation and has a good relationship with the U.K. financial services industry. Luxembourg-domiciled investment funds originating from U.K. money managers represent 16.5% — or about e570 billion — of total assets under management in the country.

Camille Thommes, Luxembourg-based director general of the Association of the Luxembourg Fund Industry, said the association has been receiving questions from U.K. and international money managers looking into some of their business models and considering the effect of Brexit, and “to what degree those services depend on the existence of a passport.” There is also potentially an impact on investment funds in Ireland and Luxembourg that serve the U.K. investor community, he said, “so there is some reciprocal relationship that needs to be taken into consideration in the discussions.”

Jiri Krol, deputy CEO at the Alternative Investment Management Association in London, said from a narrow and technical perspective there might not be that much change in the way the alternative money management industry operates from the U.K.

He said the two big pieces of regulation that apply to the U.K. money management community - AIFMD and MiFID - have a passporting mechanism for third countries, and the U.K. either has a full complying regime, or is about to put one in place. And “as far as hedge fund UCITS are concerned, the vast majority of those funds are established outside the U.K.,” he said.

But there is a caveat, which is that all this can change. The EU might change the existing rules so it may become unattractive to operate under a passporting regime. Furthermore, some of the regimes may even be closed down, he warned.

Mr. Krol said that short-term there is the possibility of maintaining “a pretty similar level of access to the EU. ... Medium- to long-term there is much more uncertainty due to divergence of the EU rules and the U.K. regime.”

Sources in money management are comforted by one important factor favoring London's continued standing as a financial center: its network associated with money management.

“There is a reason that London is the center for finance,” Hermes' Mr. Nusseibeh said. “It is not to do with the front office ... but the back office. London has a superb depth of experience in support services. ... This has been built over many years, and why it is easy to set up business here.”

He also highlighted London's money management talent pool: “That is not something you can just create overnight.”

Morningstar's Mr. Kemp agreed that the network factor is strong for London, and that “a city or country that wanted to take London's place ... for asset management would need to not only attract the asset managers but the other parts of the network as well. It is very difficult to break a network in that way. It is a strong source of sustainable, competitive advantage” for London. n

River and Mercantile reaches deal to be acquired by AssetCo