Managers, funds jump into action after the U.K. vote

Many see short-term opportunities, but longer-term concerns from Brexit vote

Pension fund and money management executives are coming to terms with the U.K.'s momentous decision to leave the European Union, embracing the opportunities that volatility is presenting but doing so with serious concerns and questions about how to move forward.

See how the pound, gold and more reacted to Brexit in Charts

With an initial reaction to the June 23 vote of shock, pension fund and money management executives agreed in the hours after the vote that they now have serious, long-term issues to consider.

“We had seen the euro trading bloc as an improving area long term that we could invest in — we have been feathering into Europe a little bit starting last year,” said Christopher J. Ailman, chief investment officer of the $187.4 billion California State Teachers' Retirement System, West Sacramento.

Regarding “the momentum we had toward the U.K. and Europe, this definitely causes it to wane. Where we thought we were seeing a future of opportunity long-term ... vs. Asia and the U.S., we will reassess that very much so.”

CalSTRS' asset-class directors met June 24 with their portfolio managers to review the situation, he said, adding he will meet with those directors on June 27.

“We know our exposure to the U.K. and Europe, but we will really look at the granular level, particularly the real estate and private equity” investments, he said. While changes cannot be made overnight to private equity funds, executives could use “price fluctuations as an opportunity, but also to be more diligent on the risk. For infrastructure, with any of our long-term investments, we need to pause for reflection and thought. It has a long-term impact on the U.K. — London was, to us, really the financial center of the world. Is that going to change?”

As a long-term investor, CalSTRS looks at “megatrends,” he said. “To use a California phrase, we look for big waves that we can ride for a long time.”

A long-term approach also is the norm for the C$278.9 billion ($218.2 billion) Canada Pension Plan Investment Board, Toronto, which will continue to view the U.K. and Europe as important and attractive markets, said Michel Leduc, global head of public affairs and communications.

“We expect that the results of the vote will have an impact on the performance of markets and CPPIB is not immune,” Mr. Leduc said. “Yet, our exceptionally long investment horizon shapes how we view, measure and account for macroeconomic events and risk.”

While the fund has a bias toward stability over uncertainty, periods of dislocation “can present compelling opportunities that short-term investors are unable to pursue,” Mr. Leduc said.

Consultants said they are working to determine, and communicate, how their clients should respond.

“We are not going to start trading client portfolios one way or another, but are (we) going to communicate to clients?” said David Morton, Norwalk, Conn.-based chief market strategist at Rocaton Investment Advisors. “And if so, what do we communicate? Clients know from media what's happened — the question is, "Is there some form of action we can either encourage or stop by communicating something to them?”

While he said he's not sure clients are leaning toward changing portfolio positioning, the important question is what happens next. “Do we have one day of a blowout and then things calm down, or is this the start of a long-term downward spiral?”

While the fall in long-dated yields will reduce funding levels, the dispersion of the fund's private market portfolio, “which was positioned for longer-term global growth, irrespective of public market/macroeconomic malaise,” means executives still expect to deliver required returns.

There will be a limited need to change the constituent countries in indexes, said Remy Briand, global head of research for MSCI. According to Mr. Briand, most investors use indexes that use geographic definitions. There will be “no change” to the MSCI Europe, which will continue to include the U.K.

But, he noted, there are indexes that include only the members of the European Union that will no longer include the U.K. after Britain eventually leaves.

MSCI modeled the potential impact from a Brexit.

One key takeaway, according to Mr. Briand, was the impact on shares in financial companies, which fell sharply June 24. More generally, Mr. Briand recommended investors conduct more event modeling as the “rise of populism” could create more specific event risks in the global financial markets.

Given the historical movement in currencies, Mr. Briand said “investors will start to ask should they hedge” their currency exposure more.

Once the markets and executives got over the initial shock of the referendum result, they sprang into action.

“As for new investment, we expect opportunities to present themselves in the coming months, particularly in real assets,” said Mr. Barker.

Mr. Ailman said CalSTRS executives are “making short-term moves to protect the portfolio ... there will be short-term primary volatility in our foreign currency portfolio, and we will ride through these equity markets. The volatility does give us a chance — we had some long-term transitions we wanted to put on, so that gives us some opportunities to put some of those in place.” 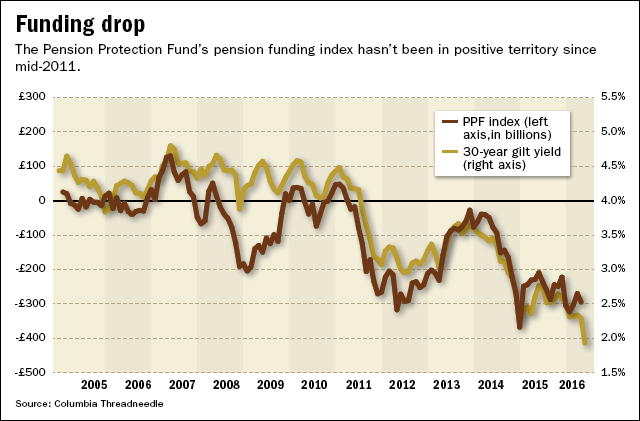 Some money managers have been particularly busy in the months leading up to and immediately after the vote.

Baring Asset Management had positioned away from sterling in preparation for the vote, with about 30% of portfolio assets in overseas currencies, mainly the dollar and yen, said Marino Valensise, head of multiasset and income. “We are glad to have done (this) because the sterling position — which at some stage overnight (June 23) seemed a stupid position to have — actually protected the portfolio, (offsetting) losses coming from the equity exposure.”

Executives will retain that position “in the belief that sterling will go quite a bit lower,” Mr. Valensise said. U.K. real estate exposure had been reduced to 8% from 10% in preparation, and will probably be trimmed further to 5%.

In the immediate aftermath, Barings sold its 3% position in convertibles. “Usually it is a position that works well after a crisis, and not in a crisis — so we don't think it had a role to play,” said Mr. Valensise.

Elsewhere, Baring's multiasset executives are looking at weakness in the U.S. high-yield market, “to play a strong U.S. economy without the excessive valuations of the equity market — but with a nice coupon attached to it”; the FTSE 100, due to its high percentage of revenue derived overseas; and the Japanese equity market, because any weakening of the yen will lead to a rebound in equities, Mr. Valensise said.

Pioneer Investments immediately reduced beta in portfolios and increased exposure to some defensive areas of the equities market, “where the indiscriminate sell-off today has opened up some opportunities,” said Diego Franzin, Dublin-based head of European equities. The firm is focusing on downside protection short-term and alpha-generation medium-term.

“This type of environment is a stock-picker's heaven — as we see high-quality companies selling off to more attractive valuation,” Mr. Franzin said.

While Eaton Vance is not a short-term trader, “we are always looking for opportunities where asset prices disconnect from fundamentals,” said Eric Stein, Boston-based co-director of global income. “We see lots of asset price moves, and the question is how should we play that?”

Much will be determined by the U.K. and EU's “divorce process,” he said.

The multiasset team at PineBridge Investments made further adjustments to its portfolio, having reduced risk in European equity and other currency exposures in the runup to the vote. It had become “increasingly concerned that the market was pricing in a very high probability of remain,” said Hani Redha, portfolio manager, global multiasset in London. “We are currently assessing market price action in the context of a new landscape,” and the team has exposure to cash and risk-free assets “that can be deployed into risk assets.”

Wouter Sturkenboom, New York-based senior investment strategist, Europe, Middle East and Africa at Russell Investments, said the firm is advising portfolio managers to stay neutral on the whole. “At the margin, for those who have the ability and inclination, we are advising them to dip a toe into risk assets under the assumption that markets are slightly overreacting on a short-term basis.”

And Neuberger Berman LLC's Joseph V. Amato, president and chief investment officer — equity, in New York, said the firm “moved into this pretty neutral on risk ... as markets overreact” executives will look to add — or take off — risk.

Aaron Cunningham contributed to this story.

Brexit by the numbers

U.K. markets and currency continue to drop; growth forecasts slashed in wake of…