There's a lot to love about private debt, with its lower expected volatility than bonds and immediate cash flow. But even the sector's most ardent admirers acknowledge its dark side: risks that could cut into investors' returns.

Institutional investors' interest in adding private debt to their portfolios is leading to greater competition for larger loans — $100 million or more — and so-called covenant-lite structures for those loans. It is also leading investors to add higher risk investments.

Global private debt managers had a record $561 billion in combined assets under management, including $245 billion in unspent capital commitments, aimed at these investments as of Sept. 30, the most recent data available from London-based alternative investment research firm Preqin. That is up overall by 16%, with dry powder up 35%, from year-end 2014.

And the flow is not stopping. So far this year through June 21, $21.6 billion was raised by 34 private debt funds and managers still in the market are targeting a combined $142.3 billion for 280 private debt funds, Preqin data show. 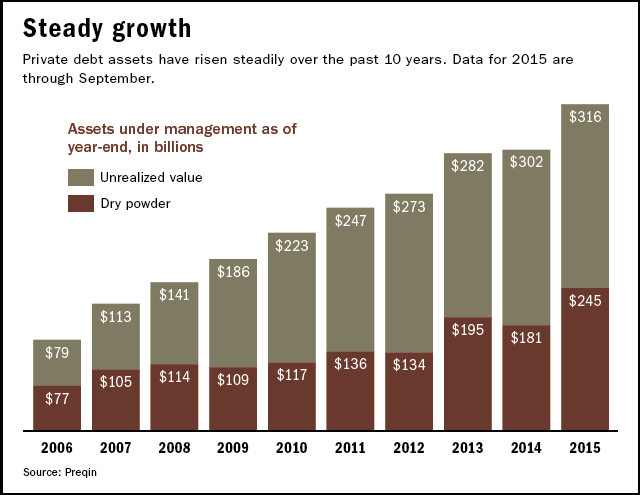 Investors have been searching for yield for a while now, and private credit seems to fit the bill. Some strategies even offer the promise of returns that are just two to three percentage points lower than private equity but without the J-curve, or poor performance in the early years of a fund.

What's more, private credit lockup periods are much shorter than private equity strategies, supporters said. And while the sector is less liquid than bonds, bonds can lose their liquidity in a down market because investors are loath to sell at a loss, they added.

Potential return expectations are all over the map, with industry insiders citing ranges of 3% to 8% at the low end, and up to the midteens.

But those higher expected returns that investors want come with leverage, which adds risk, and riskier loans.

Then there is good old-fashioned credit risk — the possibility of a loan default.

For example, the current industry return expectation for a direct lending portfolio is 8% unlevered and between 10% to 12% with a good manager using one-to-one leverage, that is, a loan that equals the amount of the investment, Mr. Nesbitt explained.

Many investors choose to add leverage in order to get similar returns to private equity without some of that investment's downside.

“The historical return on private equity has been about 12% to 13%, but to get there it takes a long time ... you're not getting your money out for five to 10 years. It's a long haul and in the short term (private equity) has a real J-curve drag,” Mr. Nesbitt said.

Private debt “has immediate cash flow, no J-curve ... and, if I want liquidity, it doesn't take me that long to get liquidity,” he said. “That's a pretty good trade in the current market.”

In general, investors tend to leverage portfolios of senior loans, which are considered safer, and are less likely to add leverage to portfolios of junior securities, Mr. Nesbitt said.

A portfolio of riskier loans such as mezzanine, junior credit and more opportunistic credit strategies — those that are farther back in line to get paid should the borrower default — already offer higher returns, he said.

Managers say more investors are likely to choose leveraged portfolios for their return potential even though leverage could also double losses.

But as investors learned in the downturn, leverage can increase losses, Mr. Attanasio said. “Any time you put leverage to a portfolio you increase the risk, by definition. If you have losses, you magnify those losses. You also increase positive returns with leverage.”

Credit risk is an important to understand when investing in private debt strategies, Messrs. Fann and Nesbitt said.

However, losses from defaults minus recoveries historically have been in line with, if not lower than, those on public high-yield bonds and leveraged loans, he said.

Still, manager selection is extremely important. The success of investors' private credit investments depends on whether the manager can hunt out deals, accurately analyze credit and fix problems when they arise, Mr. Fann noted.

At the end of last year, Ares Management merged its liquid and illiquid credit businesses, in part, to be able to offer new investments.

“The opportunity set (for private lending) has increased and over the past couple of years is becoming more interesting,” said Mr. Gildea.

Hamilton Lane recently closed a $210 million opportunistic credit fund for short-duration loans that is to be invested in one year from the fund close, Mr. Gildea noted. This concept of offering funds with short investment periods is new, he added.

“In private credit, managers have a lot of opportunity to create alpha if the manager is good at buying loans when attractive and sells at the right time,” Mr. Gildea said.

Even though banks are doing much less lending than before the financial crisis, there is more competition for loans among non-bank lenders in the larger end of the market, leading to lower income and loan agreements with fewer safeguards, or covenants, protecting lenders than there were just a year ago.

“The borrowers are not knocking at your door,” Cliffwater's Mr. Nesbitt said.

“Some managers would disagree with me, but my sense is borrowers have more negotiating power today, at least over the last couple of quarters,” Mr. Nesbitt said.

Investors making sure there's a 'plan B'

Investors making sure there's a 'plan B'