Investment outsourcers reported the first decline in assets managed worldwide for institutions with full or partial discretion since Pensions & Investments began tracking the industry in 2011.

The recent decline is a sharp contrast to strong growth of outsourced assets managed with some level of discretion in the previous two years: Assets rose 10% to $1.3 trillion in the year ended March 31, 2015, and jumped 25.7% to $1.18 trillion as of the same date in 2014.

The pause in momentum can be attributed in part to corporate pension risk transfers that moved assets from investment outsourcing into annuities, sources said. But the same observers stressed that outsourcing is poised for huge growth worldwide, especially from corporate defined contribution plan sponsors and non-profit health-care organizations.

Some of the first corporate clients Mercer took on for investment outsourcing seven to 10 years ago have begun to freeze and close their defined benefit plans, a process that Mercer is also assisting, Mr. Joseph said. “There's a negative revenue angle to risk transfers, but it's something we signed on to do, to help companies manage all aspects of their plans,” he said.

Even with the loss of some defined benefit plan assets, Mercer's outsourcing assets — 99% of which are managed on a fully discretionary basis — grew 11.6% to $124.8 billion in the year, pushing the firm to the top of P&I's ranking of managers based on worldwide assets under management with at least partial discretion. Mercer ranked second in the prior year ranking.

Russell Investments dropped to second place with assets declining 6.6% to $109.6 billion in the year. About 36% of Russell's outsourcing assets were managed with full discretion.

Rounding out P&I's list of the five largest managers of worldwide outsourcing assets managers with full/partial discretion were:

nBlackRock Inc., which moved to third from eighth place with asset growth of 27.8% to $87.4 billion. About 82% of BlackRock's assets were managed with full discretion;

nAon Hewitt Investment Consulting, which rose to fourth from seventh place with 71% of $87.2 billion in assets managed with full discretion. Asset growth in the year ended March 31 was 27.1%;

nSEI Investment Co. dropped to fifth place from fourth with a 2.3% increase in assets to $84.8 billion. About 36% of SEI's assets was managed with full discretion. 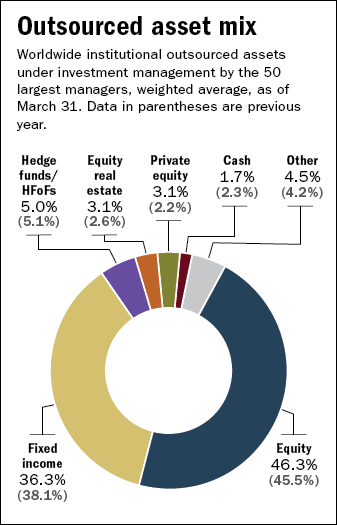 “Defined benefit plan sponsors tend to hit the inflection point when they reach about $5 billion,” Mr. Cary said, stressing “this is when corporations have to weigh naming a CIO and adding a team to handle investment management against outsourcing.”

The biggest area of growth for Aon Hewitt has been in helping sponsors with defined contribution plan simplification, reducing the number of managers and options offered and creating multiasset portfolios for participant use, he added.

Mr. Cary said he could not identify any of the firm's clients, but P&I recently reported that Aon Hewitt designed and manages the glidepaths of target-date funds for the 401(k) plans of American Airlines Group Inc., Fort Worth, Texas, which total about $13 billion (P&I, May 30).

American Airlines had a big job on its hands in combining its own defined contribution plans with those of US Airways Group, which parent company AMR Corp. acquired in 2013. Corporate actions have been a big driver of outsourcing business over the year, said John Nawrocki, a partner in the OCIO solutions group of Rocaton Investment Advisors LLC, Norwalk, Conn.

“There's been more focus on non-investment issues by defined contribution plan sponsors as they cope with a rising number of corporate actions they have no control over such as mergers, spinouts and buyouts,” Mr. Nawrocki said, noting that time is of the essence in handling the retirement plan implications of such actions.

“Corporate plan sponsors have to get on the defined contribution plan changes right away and the results have to be exactly right,” he added. And because of the complexity, many turn to outsourcers like Rocaton to handle all aspects — from plan design and portfolio construction to selection of the record keeper, custodian and investment managers — and usually investment management of the plan as well.

Rocaton's outsourcing assets managed worldwide on a full/partial basis rose 37.3% to $7.6 billion in the year ended March 31, moving the firm to 33rd place from 40th in P&I's ranking.

“We've seen a big and somewhat surprising move by our clients to discretionary management from traditional advisory services,” Ms. Daniel said, noting non-profit health-care companies have been eager to invest in the funds

Prior to the introduction of the investment pools, Ms. Daniel said Highland only had about $2 billion in discretionary outsourcing assignments.

A private equity fund of funds is planned for launch in 2017 in response to client demand, Ms. Daniel said. n