Since the end of 2008, central banks have been conducting the largest economic experiment in history. By expanding their balance sheets and slashing interest rates, monetary policymakers have dramatically altered return patterns across asset classes. Bond prices have been chased to record highs, commodities have experienced white-knuckle volatility, while equities have plunged and then mostly recovered — for now. The uptick in volatility since mid-2015 — the Chicago Board Options Exchange Volatility index has had a daily average of 19% over the past six months against 16% in the preceding six — has made the stock picker's art more difficult than ever before.

One of the ways in which equity markets have been affected is that correlations between stocks have increased. Quantitative easing has been a tide that has lifted all ships, and so equities have risen or fallen indiscriminately based on the inclinations of Mario Draghi, president of the European Central Bank. But high correlation need not mean low dispersion. If the former is defined as the degree to which the price movements of two assets are related, then the latter is the absolute difference in performance across a relevant time period.

We believe the unusual market dynamics seen recently are likely to continue. Specifically, we expect to see repeats of the volatility of late 2015 and early 2016. Dispersion tends to increase as volatility rises. Consider figure 1 as an example. The graph shows a close relationship between the VIX and 3-month dispersion across European stocks.

Equity market-neutral strategies seek to capitalize on dispersion by monetizing the differential between outperformers and laggards in a given universe. If the aforementioned interaction between volatility and dispersion holds, we believe we could be headed toward a conducive environment for equity market-neutral investment. To take a sector example, the one-month rolling dispersion for financials between the 30th and 70th centiles has hovered persistently around the 5% mark since the global financial crisis, irrespective of region. This might surprise some, as intuition would suggest that trends such as capital requirements and other regulation would have affected the industry in a more uniform fashion. These levels of dispersion imply the potential for a skilled stock picker to harness alpha through long and short positioning. 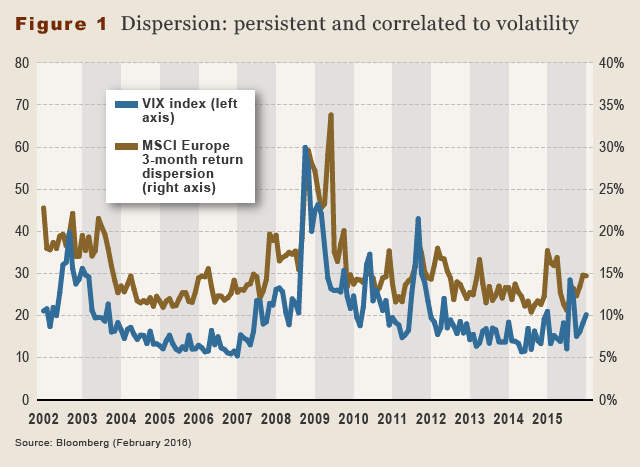 A man and his dog

Over the short term (one to three months) the key to this strategy is mean reversion of stocks with co-integrated prices. To understand co-integration, think of a man walking his dog on a long lead. The animal can move wherever it chooses and so its path will not necessarily be highly correlated with that of the man. But the dog is ultimately bound by the length of the lead; when it reaches its full extent, the beast will have to return. Applying this analogy to equity markets, when the spread in price of two co-integrated shares reaches maximum dispersion within its historical range, this would be the optimal time to execute a convergence trade.

Over the longer term, more fundamental dispersion can be capitalized on where the investor believes that two stocks will continue to diverge. Finding businesses that are likely to outperform over an extended period is evidently a momentum strategy, which contrasts with the short-run mean-reversion approach we already have discussed. Some academic literature suggests that while both can be profitable methods, the amalgamation of the two can be more lucrative than either independently, due to the diversification benefit implicit in the combination. This argues for an equity market-neutral structure that decentralizes investment decisions, making stock selection the responsibility of multiple individuals pursuing separate, and potentially complementary, approaches.

The attraction of an equity market-neutral strategy is that it looks to minimize beta exposure. In other words, its short positions can offset the long, meaning tilts to specific industries or countries can be contained. A particular investment style can itself become a beta exposure and this is why it is important to deploy a variety of strategies at once.

Taking momentum as an example, one can see from figure 2 that the approach consistently returned superior performance in the fourth quarter. One explanation for this trend is that the highly competitive streak in many fund managers causes those whose performance has lagged the peer group to develop greater risk appetite toward the end of the year in order to make up the shortfall in their relative returns. It seems likely that in the pursuit, many scale up winning positions, creating self-fulfilling and cyclical momentum. 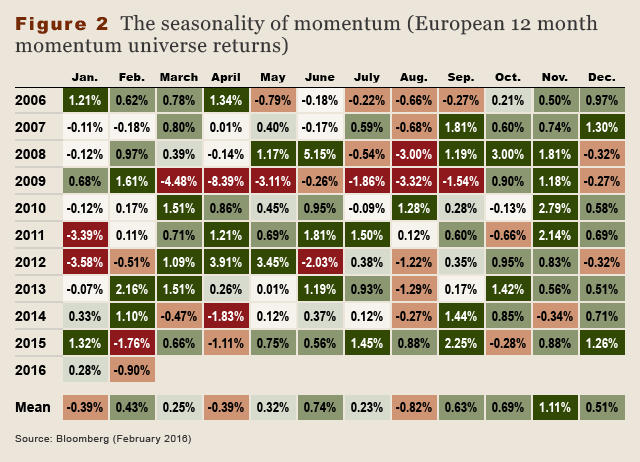 When the aim of an equity market-neutral strategy is to deliver relative market neutrality and emphasize stock-picking skill, we think it is essential to control factor exposures. This requires a robust risk-management framework given that these tilts, as we have seen with the momentum example, are not necessarily immediately obvious. If these are not properly identified, then any positive influence of the hidden factor exposure could be attributed to manager skill. This could lead to investors incurring unjustified performance fees as well as overstating the value of the existing track record.

Interacting with factor exposures is made harder still by the fact that a certain tilt will often be applicable to different industries in different ways. Free cash flow, for instance, will apply very differently to a consumer staples business than it will to a utilities provider, where the threat of government curtailment of excess profits can lead to accounting manipulation of cash numbers.

Other than stock-specific and beta risks, there is a third category of risk with which an equity market-neutral strategy must contend. This is human risk and governs the psychological flaws that cause people to commit persistent behavioral mistakes in their decision-making. Any sophisticated risk management process must now also address this area. Such human risk might be mitigated by having multiple individuals fishing in small pools of expertise rather than one star manager, as well as less conventional methods such as robust feedback loops and process coaching.

Dispersion occurs across timeframes, regions and sectors. The potential opportunity for equity market-neutral strategies is compelling, especially with the backdrop of increased volatility. To achieve this, however, it is imperative for a manager to have the appropriate tools aiming to ensure performance is consistent with the stock-specific mandate and that human risk is minimized.

Simon Savage is head of European and global long-short strategies at Man GLG in London.