If the pace of hedge fund searches and hires in the first four months of the year remains steady, 2016 could be a bumper year for institutional investment in hedge funds, even if terminations and allocation cuts continue at the current level.

Institutional activity in hedge funds this year through April 28 had terminations of $3.96 billion; investment of $3.56 billion in new hedge funds or hedge funds of funds; and searches for $20.32 billion, analysis of Pensions & Investments' data showed. 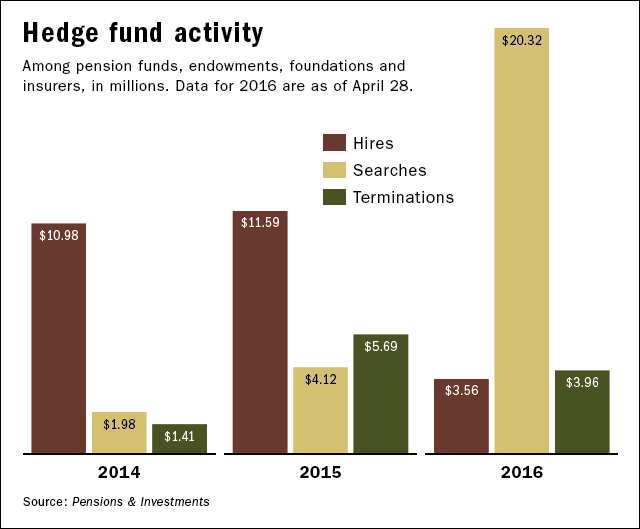 The widely reported decision in mid-April by trustees of the $51.2 billion New York City Employees' Retirement System to get rid of hedge funds had an immediate, global impact on the investment industry, observers said.

Sources said the last time a hedge fund portfolio termination garnered so much ink and caused so much speculation about copycats was in September 2014 when the $293.6 billion California Public Employees Retirement System, Sacramento, announced it was shuttering its $4 billion absolute return program.

Headlines about the New York trustees' reasons for liquidating the $1.5 billion hedge fund portfolio — high fees, poor performance and a lack of transparency — deepened concern for many institutional investors.

“The press spotlight is on hedge funds now because of the NCYERS news, just as it has been on offshore-domiciled hedge funds after news about the Panama Papers leak broke,” said Jack Inglis, CEO of the Alternative Investment Management Association, London.

Mr. Inglis stressed that “NYCERS is not a catalyst. It's a continuation of a theme, a story, which is really about investors' disconnect between expected performance and fees, and the current reality.”

The value of hedge funds for investors with extended investment time horizons — like pension funds, endowments and foundations — is over the long term, Mr. Inglis said.

Headlines were so negative about NYCERS' move and the likely effect it will have on other institutional investors that Mercer Investment Consulting recently drafted a position paper, “Ebb and Flow of the Hedge Fund Industry,” in response.

“Our view isn't nearly as dire as the rest of the industry about hedge funds and their place in an institutional portfolio,” said Scott Zipfel, principal and a St. Louis-based analyst in Mercer's alternatives consulting unit.

He noted that hedge fund-of-funds portfolios outperformed typical 60/40 and 70/30 equity/bond portfolios in 2015.

Institutional chief investment officers, consultants and money managers said they are fielding a lot of questions, especially from trustees who hold fiduciary responsibility for the management of pension plans, endowments, foundations and other investment pools.

“Since the news about NYCERS broke, we've been doing quite a lot of research across the asset management community and the consensus about hedge funds is still `hold or increase,' but not increase by much,” said Bruce Keith, CEO of InfraHedge Ltd., London, State Street Corp.'s managed account hedge fund platform..

“People need to stop and take a bit of a deep breath. This is a mature industry and there's not a mass exodus,” said Raymond C. Nolte, co-managing partner, CIO and portfolio manager at hedge funds-of-funds manager SkyBridge Capital II LLC, New York.

Some CIOs are reviewing hedge fund portfolios with a keen eye and doing a lot of explaining to investment committees, trustees and stakeholders.

During the April 21 meeting of the South Carolina Investment Commission, Columbia, which oversees the assets of the $26.8 billion South Carolina Retirement Systems, Geoffrey Berg, acting CIO, was ready for questions from commissioners.

“I prepared for this because I thought I would be asked about NYCERS and hedge funds,” Mr. Berg said, according to a webcast of the meeting.

Performance of South Carolina's $2.9 billion hedge fund portfolio has been “significantly better than those of other public plans,” Mr. Berg said, noting that “over the last five years, some plans haven't had the luck that we've had with good hedge fund (partners). There are a lot of people who don't do hedge funds well.”

The low-beta hedge fund portfolio returned -1.06% for the 12 months ended Feb. 29, compared to -5.36% for the HFRI Fund Weighted Composite for the same time period, a performance report showed.

Despite South Carolina's good experience, Mr. Berg observed that “frustration has been bubbling over with (other) people asking what they are getting for the price paid” for hedge funds and added that he expected to see more institutions getting out of hedge funds.

Even before news of NYCERS' hedge fund decision hit the global stage, investment officials and trustees already were taking another look at hedge fund portfolios because performance has been uninspiring of late.

The $86.4 billion Ohio Public Employees Retirement System, Columbus, for example, hosted an educational session for trustees “to present both sides” of the hedge fund debate to trustees at a March 15 meeting, said Julie Graham-Price, a spokeswoman for the fund.

Presenters in the more than four hour session included Elizabeth Parisian a consultant with the American Federation of Teachers, who presented the case for why hedge funds are unsuitable, and Clifford S. Asness, co-founder and managing principal of hedge fund manager AQR Capital Management LLC, who argued hedge funds are good for institutional portfolios.

No action was taken at the meeting regarding OPERS' $6 billion hedge fund portfolio, Ms. Price-Graham said.

Unrealistic investor expectations of both high returns and downside protection from hedge funds, regardless of market conditions, likely is a major source of the frustration felt by investment officials and trustees.

“There are a few headline makers with relatively small investments in hedge funds that are making changes because their results haven't been what they expected. There's a cyclical factor to this situation,” SkyBridge's Mr. Nolte said.

Consultants like Cambridge Associates LLC, Boston, are advising clients to be patient.

“We've seen this before, our clients have seen this before. We fully expect hedge funds to underperform in strong equity market conditions. In this kind of environment, realistically, you have to accept modest returns,” said George Hasiotis, managing director and a specialist in hedge fund portfolio construction for Cambridge clients.

“The spread between returns of managers in the top quartile and the median is wide, so you need to select managers very carefully,” he said, noting many of Cambridge's clients are maintaining their allocations and using the down-market cycle for hedge funds to make manager upgrades and invest in capacity-constrained funds as they briefly open to new investors.

When it comes to fees, Mercer's Mr. Zipfel said fee reductions for institutional investors from the old industry standard of a 2% management fee and 20% performance fee have become fairly common, and willingness to lower costs is likely to continue, especially for sizable investments.

Aside from NYCERS, the only other institution to completely exit hedge funds in 2016 was the $2.1 billion Oklahoma Firefighters Pension & Retirement System, which eliminated its 3% or $63 million allocation to low-volatility hedge funds because investment officials think they can find similar portfolio diversification properties in other strategies.

The Oklahoma City-based fund made its redemption decision in late March.

In February, the $15.2 billion Illinois State Board of Investment, Chicago, reduced its hedge fund allocation to 3% from 10% for performance reasons. Three managers running $988 million were terminated.

The majority of other hedge fund redemptions were of single managers for performance, organizational concerns or strategy change reasons, and ranged from $5 million to $488 million; most of the cash from the terminations will be reinvested in hedge funds.

Two outsized searches pumped up the new asset figure this year to date.

The $178.7 billion California State Teacher's Retirement System, West Sacramento, is searching for managed futures hedge funds to run a total of $6.4 billion and global macro managers for an additional $2.4 billion.

Across the Pacific, the ¥205.1 ($1.7) trillion Japan Post Bank, Tokyo, is searching for hedge funds-of-funds managers to handle a total of $10 billion.

Investments up 5.5% in challenging year

Funds of funds in good graces of investors again

AIG seeks to redeem $4.1 billion from hedge funds after loss