In a year when the nation's largest corporate defined benefit plans saw a 5.7% aggregate decrease in liabilities, funding levels barely budged. The culprit: a combination of low returns that hovered around zero and declining contributions for the third straight year.

Sixty-two of the 100 plans in P&I's universe reported a negative return on plan assets, with an average return of -0.31%.

Dips in the funding ratio have not been accompanied by increased pension fund contributions since temporary federal funding relief lowered regulatory minimums by allowing companies to use higher interest rates to calculate liabilities.

“What we're seeing is that people are really taking advantage of the pension smoothing,” said Bob Collie, chief research strategist, Americas institutional, at Russell Investments in Seattle. Contributions made by large plan sponsors that the firm tracks in 2015 were not only insufficient to affect the funded status, they were too low to cover costs.

“The contributions were less than the value of the new benefits that have accrued,” he said.

Other industry observers viewed the relative stability in the funding ratios as a welcome development after a decade of volatility.

“The more plans have derisked the more they've been inoculated from market volatility,” said David Eichhorn, managing director, investment strategies, and a member of the investment committee at NISA Investment Advisors LLC in St. Louis. Although some plans have taken more action than others, overall, corporate DB plans are better protected against uncertain market returns and interest-rate risk than they were 10 years ago, he said.

In 2014, corporate plans had a 38.5% percent average allocation to fixed income.

Goodyear Tire & Rubber Co., Akron, Ohio, had the highest fixed-income allocation on P&I's list, with 89% of the plan's $5 billion in assets allocated to fixed income in 2015.

After freezing its plans for U.S. hourly workers and making a $1.2 billion contribution in 2014, Goodyear “changed its target asset allocation for these plans to a portfolio of substantially all fixed-income securities designed to offset the future impact of discount rate movements on the plans' funded status,” the company's 10-K said in 2014.

Although not all plans have committed to a liability-driven investment strategy, Mr. Eichhorn said that, on average, most corporate plans have taken some action over the past decade to offset market volatility and interest rate changes.

“While risks remain, there have been meaningful steps over the past 10 years that have helped inoculate plans against volatility in the markets. Some plans are nearly fully insulated. They've basically derisked and they're at their end state,” Mr. Eichhorn said. 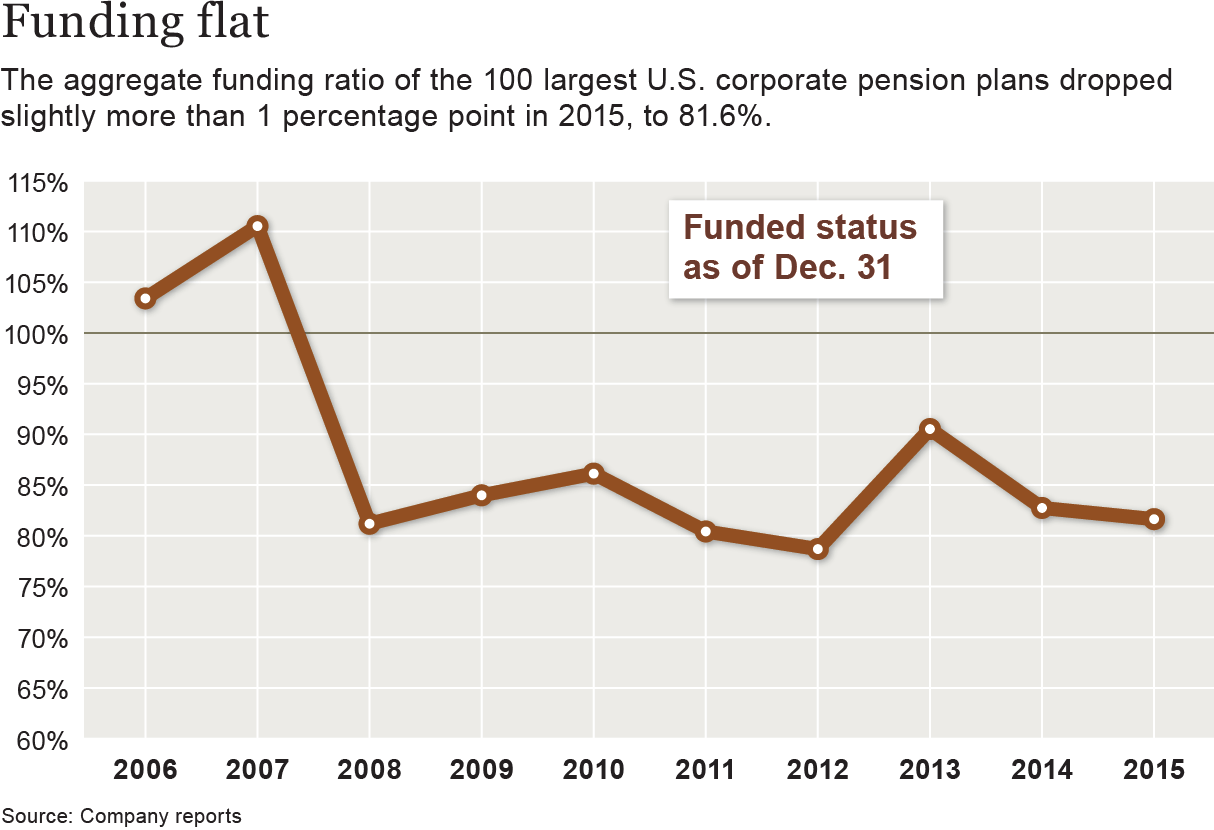 Given the plans' long horizons, sponsors have time to meet their obligations, one expert said.

“We're talking about decades, many, many decades, before these (benefits) are to be paid out,” said Alan Glickstein, Dallas-based senior retirement consultant at Willis Towers Watson PLC.

Mr. Glickstein said volatile markets and more frequent revisions of actuarial assumptions mean annual reports should be considered a point-in-time measurement, rather than an absolute judgment of a plan's funded status.

Financial services companies made up the remaining four of the five highest-funded plans.

Kimberly-Clark Corp., Dallas, contributed $410 million in 2015 and purchased group annuity contracts that transferred pension benefit obligations totaling $2.5 billion for about 21,000 U.S. retirees to Massachusetts Mutual Life Insurance Co. and Prudential Insurance Co. of America. At the end of 2015, Kimberly-Clark's pension liabilities dropped to $3.96 billion from $6.86 billion the previous year, plan assets were lowered to $3.51 billion from $5.91 billion, and the plan's funding ratio went up to 88.6% from 86.2%.

Also, J.C. Penney Co. Inc., Plano, Texas, offered a lump-sum window to about 31,000 retirees and beneficiaries in September 2015 and, a month later, purchased a group annuity contract from Prudential to transfer the pension obligations of about 43,000 retirees and beneficiaries. The plan's funding ratio dropped to 98.8% at the end of 2015 from 104.2% the previous year and plan assets fell to $3.29 billion from $5.47 billion. But the risk-transfer transactions lowered pension liabilities to $3.33 billion from $5.25 billion.

General Motors Co., Detroit, plans to contribute $2 billion to its U.S. hourly defined benefit plans by mid-2016, “which is expected to be financed by debt,” according to the company's 10-K. GM made $95 million in contributions during 2015 to its pension plans, which had $61.1 billion in assets and $71.5 billion in liabilities, for a funding ratio of 85.4% at the end of the year.

Mr. Owens said corporate strategies to increase contributions, including issuing new debt to take advantage of low interest rates, could be more cost effective than paying more to the PBGC.

“With the rising PBGC premiums, if the sponsor just pays the minimum requirement, in effect, it's a tax,” he said.

Contributions made a difference for American International Group Inc., New York. AIG saw the highest funding ratio increase for the year, with a 10.61 percentage point jump to 81.87%. Plan assets had a negative return of $8 million, but with a 38-basis-point increase in the plan's discount rate to 4.32% and $558 million in contributions, liabilities decreased 8% in 2015 to $5.32 billion, and assets increased 6% to $4.36 billion.

The two lowest-funded plans on P&I's list each expect to contribute more than $1 billion in 2016.

Delta Air Lines Inc., Atlanta, plans to contribute $1 billion in 2016, including $500 million in discretionary contributions above its minimum-funding requirements. Delta's 45.5% funding ratio kept it at the bottom of P&I's list for the 11th-consecutive year, with $9.37 billion in assets and $20.61 billion in liabilities.

Going forward, AIG will use a different approach to determine pension interest costs, which the company's 10-K says will result in $52 million less in projected expenses for 2016. This new accounting method aligns the timing of the plan's discounted cash flows to the corresponding spot rates on a yield curve derived from the interest rates of investment-grade corporate bonds. n

Entergy to contribute $409 million to pension funds in 2017