Since mid-June, the Chinese A-share stock market has undergone drastic volatility, with deteriorating economic and profit data unnerving many global investors. A close look at what is actually taking place on the ground in China, which we recently visited, provides a clearer understanding of the opportunities and risks.

Amid investor unease, the Chinese government's remarkably stable GDP growth reports of 7% for Q2 and 6.9% for Q3 have created an increased concern over the legitimacy of the official reported figures. In an attempt to counter this slowdown, the government has rolled out a series of measures designed to stimulate demand. It has cut interest rates and/or reduced bank reserve requirements seven times this year, released funds for infrastructure investment, cut taxes on automobile sales and lowered the required down-payment for home mortgages.

Historical precedent suggests that as China transitions to a “middle-income” economy, the path of least resistance is downward.

There are three main keys to understanding the opportunities and risks that China poses:

There is an enormous sector and regional growth disparity between the Northern provinces (such as Liaoning, Jilin and Heilongjiang) that are heavily reliant on mining and manufacturing industries, and the wealthy coastal provinces (Zhejiang, Shanghai and Jiangsu) that are mostly driven by the flourishing service sectors. Much of the current debate over the true rate of growth is based on extrapolating from one part of China to the whole. (See Chart 1) 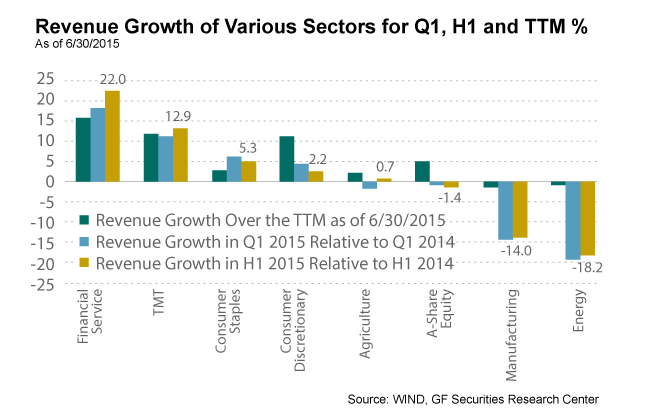 The economic slowdown that China has experienced since 2012 is not simply a generalized cyclical decline. It is driven by an intense slowdown in the industrial sector, caused by the end of growth in housing construction and related demand for many industrial products. It would be a mistake to infer that the recessionary conditions in China's hardest hit sectors and provinces is a reflection of the economy as a whole. However, it would also be a mistake to gloss over the sharp economic slowdown now taking place in those affected industries and regions.

Expectations for both growth and the progress of structural reform must be tempered. While China is among the few major global economies that can still use conventional policy tools to boost growth, it is wise to evaluate investment opportunities based on the government's core constraints and stated objectives.

One important constraint is the government's attempt to avoiding another credit runup in light of already high levels. In the Goldilocks years, bank assets exploded from about 190% of GDP in 2003 to about 300% of GDP in 2014 (see Chart 2). Credit growth, in essence, propelled GDP growth and led to a buildup of excessive leverage, particularly for state-owned entities. Total credit growth has fallen to around 12%, the slowest growth rate since 2006 but still above the growth of nominal GDP. 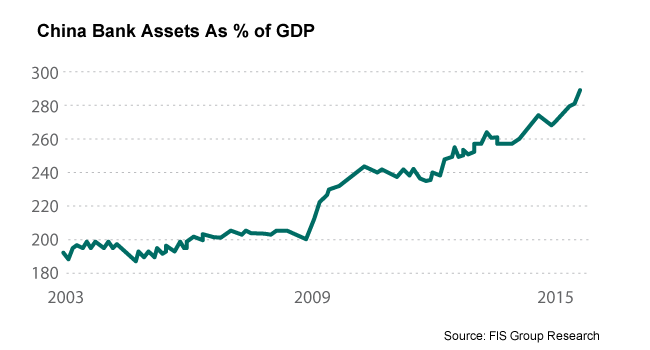 Policy easing so far — both monetary and fiscal — does seem to be helping. Both credit growth and government spending are picking up and fears that the economy was rapidly decelerating seem to have receded. At this stage, we believe targeted fiscal policies, such as a reduction of the corporate tax rate and direct subsidy supports to growing industries, will be needed to supplement monetary policy to address China's corporate financing difficulty.

The other core constraint is that while the Chinese government is not democratically elected, legitimacy with its increasingly disparate populace is enormously important. This need for legitimacy will lead to halting (i.e., one step forward, two steps back), contradictory and often confusing implementation of painful structural reforms.

Economic opportunities will arise from the government's geopolitical goals of becoming the dominant trade and economic power (most evident in the “New Silk Road” of Chinese-built trade routes through Central and the Southeast Asia, linking China to Southeast Asia, the Middle East and Africa) and turning China into a global financial power.

The recent acceptance of the renminbi for inclusion in the International Monetary Fund's Special Drawing Rights basket is an important milestone in China's bid to be recognized as a major financial power. While important, the yuan's limited convertibility and liquidity makes it a less attractive central bank reserve currency. This is precisely why usage surveys by the IMF and SWIFT suggest the vast bulk of official reserves are held as U.S. dollars and euros, with smaller amounts in sterling, yen and the Australian and Canadian dollars, as well as “other” currencies. With the yuan comprising around 2.5% of global trade, it is reasonable to expect an increase in reserves to around this level and doubling over time. That would be modestly supportive for the yuan over the intermediate term.

As China shifts away from its investment/export model, and the anti-corruption drive enters its third year, many traditional opportunities have evaporated. The next big opportunities will be created by renminbi internationalization, financial liberalization, and the consumer economy.

China's movement toward “middle-income” status will spur an “acceleration phenomenon,” whereby demand for higher quality products and services is a function not of average income growth, but of the rate at which households cross key income thresholds.

European and Japanese multinational corporations are best positioned to provide trendy, high-quality goods and services that local firms cannot. Furthermore, a weaker euro and yen would support demand by lowering the income threshold at which the goods become affordable.

On the domestic China front, it is wise to use downdrafts in Chinese equities to gain attractive entry points in “new-economy” sectors, such as consumers, health care, technology, media and telecommunications. Domestic Chinese markets have in part been viewed by the government as a policy tool to facilitate wealth transfers from household savings to rebalance the capital structure of state-owned enterprises toward more equity capital, as part of the overall objective of state-owned enterprisereform.

This year's A-shares volatility has been a function of: (a) their market structure (over 90% of capital accounts owned by retail investors) which, like many Asian markets, is primarily driven by trade momentum; (b) valuations that were not supported by earnings; and (c) the government's inconsistent policy of first encouraging and then tamping down on stock margin lending.

Perhaps learning from that experience, the government was more measured in its response to the subsequent crash in August. Importantly, as of Sept. 30, regulated and unregulated margin balances had declined substantially. (See Chart 3). Much reduced forced selling and healthy cash balances at mutual and privately raised funds (estimated at RMB 1 trillion) is providing more stability, and a constructive backdrop for China equities (particularly H shares).