Arleen Jacobius
Reprints Print
Doug Goodman
Joseph K. Azelby says the growth is a combination of appreciation and increased capital flows into funds with returns “still in the double digits.”

While worldwide real estate assets have been growing steadily since 2011, they had not reached the 20% growth level since 2006, when total assets were up 20.7%. Last year, total assets grew by 13.7%.

Total assets of the 93 managers reached $1.2 trillion for the 12 months ended June 30, well above the $1 trillion milestone first attained in 2008.

Real estate managers enjoyed faster growth in other pockets of their business. Real estate assets managed for defined contribution plans grew 15% to $16.4 billion. (P&I first inquired about real estate invested for DC plans in the 2014 survey.) And U.S. assets managed for foreign clients rose 38% to $72.6 billion, while co-investment assets rose by 44% to $24.1 billion. 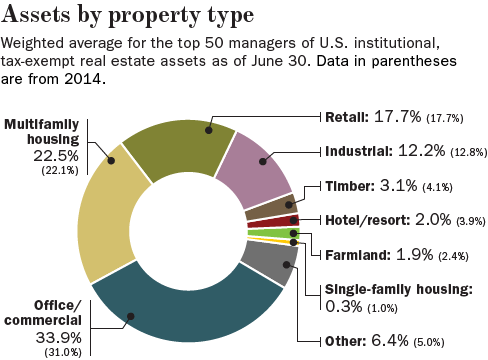 The largest real estate managers fared a bit better during the survey period. The 50 largest real estate managers of U.S. tax-exempt assets under management grew at a faster clip than the entire group, up 9.7% to $452 billion, representing 93% of the total. But capital was not as concentrated, with the top 10 managers accounting for a smaller percentage of the total U.S. tax-exempt assets — 56% — than last year's 64%.

For the year ended June 30, the NCREIF Property index return was 12.98%. The total return of the FTSE NAREIT All REITs index, which includes equity and mortgage REITs, was 3.75%, while the total return of the FTSE NAREITs All Equity REITs index, which excludes mortgages, was up 4.14%, according to data provided by the Washington-based National Association of Real Estate Investment Trusts.

Not included in the rankings again this year is Blackstone Group LP, New York, which tracks its data in a different way. But Blackstone executives did provide some information. As of June 30, Blackstone Real Estate's worldwide AUM — defined as equity value net of leverage and unused capital commitments — totaled $92 billion. 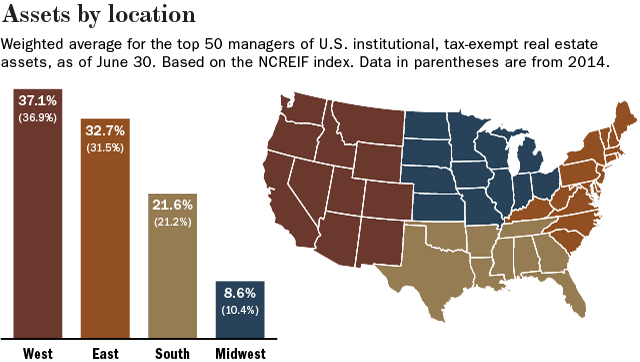 Prudential Financial held onto its top position in P&I's rankings as the largest manager of worldwide institutional real estate assets with $98.4 billion, up 13% from last year. MetLife Investment, which did not participate in last year's survey, was second with $90.1 billion. TIAA-CREF was third with worldwide assets of $84.4 billion, up 11% from last year.

For managers of U.S institutional tax-exempt assets, TIAA-CREF once again was in first place, reporting $56.2 billion, up 17%. Prudential Financial — whose assets represent both Prudential Real Estate Investors and Prudential Mortgage Capital Co. — was second with $48.4 billion for the year, up 4%. J.P. Morgan Asset Management rounded out the top three with U.S. institutional tax-exempt assets up 4.5% to $47.3 billion.

During the year, TIAA-CREF was a net buyer of U.S. real estate, making 34 acquisitions totaling $3.2 billion vs. 28 property sales totaling $1.5 billion in the 12 months ended June 30, 2014, Mr. McAndrews wrote. In September 2014, the firm raised $260 million for its sixth multifamily housing fund, CASA VI, Mr. McAndrews added. Adding leverage the fund will be able to buy about $420 million of properties, he said.

J.P. Morgan was also a net buyer of properties during the survey period, said Joseph Azelby, managing director and CEO, global real assets, J.P. Morgan Asset Management. Overall, the growth is a combination of appreciation and increased capital flows into funds with returns “still in the double digits,” he said.

“All systems seemed to be firing last year,” said Eric Adler, London-based CEO of Prudential Real Estate Investors. “Our transaction volume, which incorporates both buying and selling, was as high as I've ever seen it. We took advantage of growth in values to sell, particularly from our closed ended funds.”

The $36 billion in assets going to opportunistic strategies — an increase of 245% — shows investors added risk to their real estate portfolios. Core and value real estate strategies rose 17% each to $213.9 billion and $39.7 billion, respectively.

J.P. Morgan Asset Management still has queues to get into its core and value-added funds, Mr. Azelby noted. J.P. Morgan was No. 2 in the core ranking and No. 1 in value-added strategies for U.S. tax-exempt assets.

“We had good flows across our core through value add strategies. Investors are more confident and taking more risk, but the core space is still attractive,” Mr. Adler said. “In the low interest rate environment, comparative yields are still compelling for investors.”

“There's no doubt foreign flows are greater than in the past,” said David Gilbert, CIO and head of acquisitions at Clarion Partners LLC. “We've seen some of the greatest flows into the U.S. from Canada. Pension funds and retirement systems are growing pretty rapidly and have exhausted the investment opportunity (in real estate) in Canada. It's (the U.S.) a natural spillover.”

A big question is whether the volatility in commodities and the drop in energy prices will dampen capital flows from foreign investors, Mr. Gilbert said. “It might but ... foreign institutions are underinvested in real estate and are just playing catch up,” he added.

Assets of REIT managers rose 7%, outpacing the FTSE NAREIT indexes, even though REIT shares were in selloff mode through the summer.

BlackRock once again was the top manager of REIT assets with $95.4 billion, up 17%. The firm also had $32.4 billion in REIT assets managed for U.S. institutional tax-exempt clients, also up 17%.

Investors in for rude awakening on alts returns