Volatility as an asset class

Over the past 36 months, the U.S. equity markets have displayed an almost zen-like ability to shrug off bad news, be it the turmoil in Greece or the collapse in energy prices; events that in other eras might have set Wall Street ablaze. This cocoon of contentment, however, was ripped open in late August, when observers of U.S. equity markets were offered a painful reminder of what volatility looks — and feels — like, as the Dow Jones industrial average suffered its largest ever three-day loss, attributable to worries over sustained economic weakness in China.

Even as the U.S. markets recouped much of their losses in the ensuing trading sessions, this skittishness was not altogether unexpected. As any seasoned options trader well knows, volatility has proven itself to be the most “mean-reverting” measure in finance, a fact that when coupled with movement in key gauges tracking volatility, might signal a renewed and persistent level of excitability that the market has not experienced in some time.

As volatility can wreak havoc on asset allocations, portfolio managers — even in sanguine conditions — struggle to find the elusive combination of performance and stability. And this mandate only becomes more acute as the equity markets assume a more flappable and less predictable trajectory.

Today, however, investors — through alternative funds — have at their disposal strategies that can benefit from the growing perception of risk in the markets that sets in motion the wild swings in equities, such as those witnessed in August and early September.

These volatility strategies, when viewed as their own discrete asset class, are designed with the goal of delivering returns that are in line with historical assumptions for equities while maintaining a far narrower range of performance (i.e., a substantially higher Sharpe ratio) and downside protection that can limit losses. Moreover, in a market in which yield has become difficult to find, the construct of equity buy/writes, coupled with bottom-up fundamental analysis, can create a synthetic yield instrument that delivers uncorrelated returns and manages to capitalize on volatility rather than being subjected to it.

The reintroduction of volatility

Volatility can be tracked a number of ways. The CBOE Volatility index, perhaps the most well-known gauge, provides a reading of expected volatility through averaging out the weighted prices of put- and call-options on the S&P 500 index, and imputing an implied one month at-the-money volatility. During normal periods, the VIX will reside at a range of between 22 and 24, with a band whose values extend beyond 30 during periods of higher volatility to 20 and below in a more composed and confident market. For perspective, the VIX index fell below 12 in July, which was a low for the year, but catapulted past 50 when the market unrest peaked on Aug. 24. Volatility of volatility, meanwhile, or kurtosis, provides a gauge to track the tails of distribution. The “vol of vol” essentially measures the likelihood for outsized returns or losses or the probability for extreme price movements. And then there is skew, which measures the variance of implied volatility between out-of-the-money and in-the-money options, and reflects whether investors are favoring calls or puts at a given point in time.

Taken together, these volatility measures effectively track the vacillating market sentiment as it yo-yos between fear and greed. Complacency invokes the latter, reflected by investors' reluctance to pay for downside protection, while fear becomes evident in the inverse scenario, as out-of-the money puts become more expensive when perceived risk is priced in.

For the past two-plus years, investors have grown accustomed to an accommodative Fed policy, which has served to blanket volatility and allow equity investors to operate on the belief that the Fed will step in to counter any sharp declines. However, this “Fed Put,” as it has often been referred, has receded as the market transitions to a potential rising-rate environment and as investors digest the potential impact of both existing and future catalysts that can trigger added uncertainty.

While value investors would certainly welcome the reintroduction of volatility and the pricing inefficiencies that surface, for asset managers seeking to deliver a very specific rate of return during a given period of time, the financial crisis and the wild swings in the market that ensued, remain fresh in their memories. Who can forget the Dow's 788-point drop during a September 2009 trading session (sparked by the rejection of an early version of the bailout plan) or the 733-point drop that occurred roughly a month later. Sandwiched in between those two routs was a 936-point increase, which marked the largest single-day point gain in history for the Dow. Make no mistake, though, this was not a fun ride for investors.

But these market fluctuations, when they're not as extreme, do indeed create opportunities, particularly for bottom-up stock pickers with a focus on fundamentals and a feel for momentum. At the same time, though, volatility can sabotage asset managers' most well-thought-out plans, ravaging asset allocations and portfolio construction models in the process. Volatility can be particularly burdensome for defined benefit plans, insurers or endowments that build their portfolios around benefit distributions, predicted liabilities or forecasted payout rates. At year-end 2008, for instance, the OECD estimated the financial crisis shaved $5.4 trillion from global pension assets, of which roughly 60% of the assets resided in defined benefit or other plans with return guarantees. This past July, the Pew Charitable Trusts published data showing that even after what has been one of the better bull runs in recent history, state and local pension funds in the U.S. remain underfunded by nearly $1 trillion.

Traditionally, when retail investors discuss “low volatility” strategies, they are referring to an approach that combines diversification with systematic and regular rebalancing. These more traditional approaches — be it Shannon's Demon, the Kelly Criterion, or other variations — are more about circumventing volatility than actually capitalizing on it with true downside protection and improved return profiles.

However, other strategies that combine both equities and equity call options — or buy/write securities — can more effectively “harvest” returns out of swings in sentiment, while providing more predictable, and often better, performance even as volatility ramps up. The concept of creating synthetic yield isn't necessarily new, as portfolio managers will often invest in buy/writes on a basket of stocks tied to an index as a way to generate returns that are in line with the market over time, but at slightly reduced volatility and with the added benefit of options income.

The return potential available to this concept, however, becomes amplified when it's applied to individual stocks and combined with fundamental bottom-up research. And when done right, incorporating rigorous and faithful valuations of a stock's intrinsic value, this strategy can allow investors to isolate volatility as an alpha generator, which is where the concept of volatility as its own distinct and uncorrelated asset class really begins to take shape.

The strategy begins with an estimate of a stock's intrinsic value, which is the price at which potential bad news is fully baked into the valuation. Calls are then sold against the stock at this “in the money” level (referring to a strike price that is lower than the current stock price). The resulting structure provides downside protection, a greatly reduced volatility of returns and an implied yield that is typically commensurate with equities over time. 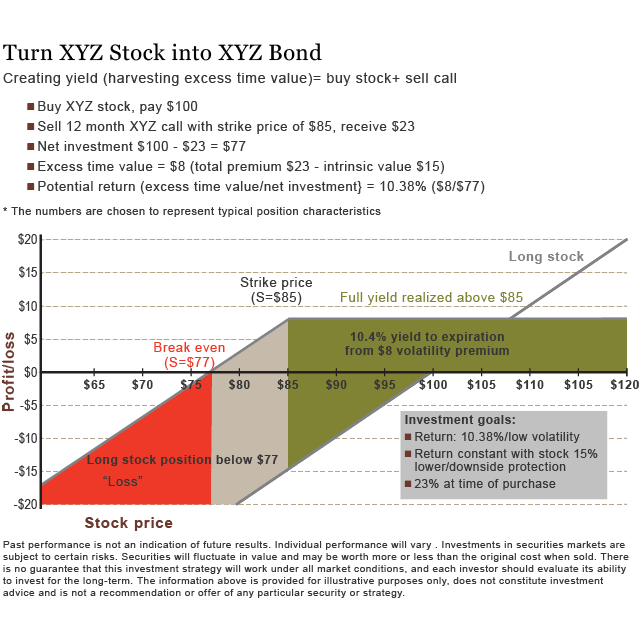 Consider, for example, a hypothetical scenario in which a stock is purchased at a $100 valuation, and a 12-month call is written with a strike price of $85 that pays back $23 over the life of the options contract. That investment, assuming shares don't fall below $85, would produce a potential return of 10.38% if held to expiration. Shares can fall to as low as $77 before the investment realizes any losses.

As this example demonstrates, the benefit of the volatility asset class is three pronged. First, just to reiterate, volatility is the most mean-reverting measure in finance, so when it can be isolated and harvested as part of portfolio construction, it can deliver a consistent return stream that is unmatched by other asset categories. Second, beyond its consistency, the category traditionally performs better than both equities and fixed income during periods marked by turmoil, and the uncorrelated nature of the asset class, provides obvious diversification benefits. Finally, as the perception of risk is priced into the market, volatility strategies will benefit from higher call prices, which translates into higher expected returns and even more downside protection.

Given the accommodative Fed policy of the past seven years and the unprecedented bull market, most institutional investors have not had to reconsider how their allocations are best optimized for the traditional vacillations in stock prices that occur from year to year. But there are a number of ways to introduce the volatility asset class into a portfolio, and even small allocations can go a long way toward smoothing out both short- and long-term performance. The discussed strategy, which creates synthetic bonds through combining equities and deep in the money calls, has been shown to produce returns in line with equities, but at half of the volatility, which essentially doubles the return on the investment per unit of risk assumed. Even in small doses, this can have a very positive impact on risk reduction across an entire portfolio.

When it's done right, investors are left with an asset class that delivers low volatility, downside protection, and both a short- and long-term return profile that is in line with historic assumptions for equities.

August roundup: U.S. equities drop most in 3 years, VIX spikes most ever

BlackRock calls for halting the stock market to avoid volatility