The most dramatic change for defined contribution plans' record-keeping contracts last year was a sharp rise in fixed-dollar contracts, according to a new survey by investment consultant NEPC LLC, Boston.

At the same time, the NEPC survey showed that DC plans continue whittling away at plan costs. The estimated median record-keeping fee for 2014 was $64 per participant down from $70 in 2013. The average annual weighted average expense ratio last year was 46 basis points, down from 49 basis points in 2013.

The NEPC survey said 47% of plans last year had record-keeping contracts in which participants were assessed a fixed-dollar amount per head vs. 29% in the previous year — an increase of 62%.

The move to fixed-dollar fees from bundled fees means “greater transparency and greater fairness” for participants, said Ross Bremen, an NEPC partner, in an interview. “Sponsors are very focused on fees.”

Under a fixed-dollar system, all participants pay the same. Fees can be charged to a participant directly or covered by a portion of the investment options' expense ratios. In a bundled arrangement, a participant's cost could depend on the size of his or her account and the types of investments, Mr. Bremen said.

More plans are moving away from the bundled contract — 32% of DC plans used them in 2014 vs. 46% in 2013. In bundled contracts, record-keeping fees are covered by a portion of the expense ratio of investment options in the plan. However, “a specific fee level is not contracted,” said an NEPC report on the survey results.

In addition, the NEPC survey report said 17% of plans had a fixed-basis-point contract last year vs. 18% for the previous year. This contract calculates record-keeping fees as an “explicit fixed-basis-point of the volume of assets in the plan,” the report said. Fees can be charged via accrual or a portion of the investment options' expense ratios.

The report also said 4% of plans use an “other” arrangement, compared with 7% for 2013. NEPC defined “other” as a contract with “some combination” of dollar-per-head and basis-point terms.

Mr. Bremen remarked that the shift to fixed-dollar contracts is becoming more popular with DC plans that have less than $1 billion in assets. In the past, the fixed-dollar approach had most often been used by the largest plans.

These accounts are used by plans that have revenue-sharing arrangements — a practice by which all or most of a record keeper's cost is offset by fees on certain investment options in the plan.

The accounts contain record-keeping revenue that exceeds the amount negotiated between the plan and the record keeper. The money can be returned to participants or used to support ERISA-approved expenses such as education or communication materials for particiants.

“Years ago, it was unusual for plans to have these accounts,” Mr. Bremen said. “Today, it's common.” 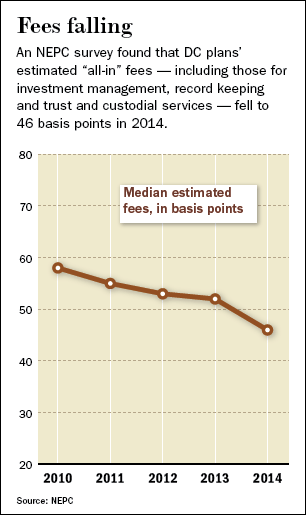 Fee-cutting is due to multiple factors — legislation, regulation, fear of lawsuits, greater scrutiny for sponsors and consultants, and competitive actions taken by record keepers, the report said.

Mr. Bremen repeated a warning that he and other DC consultants have made in recent years: Sponsors should beware of cutting costs too far because such action could impair services.

“If you look for low fees just for the sake of low fees, you will end up with a subpar product,” he said. As fees have declined over the years, “there's not a lot of room left from a record keeper (profit) margin perspective.”

Noting that record keeping is “a technology business,” Mr. Bremen added that “for participants who want the highest level of service and best products, record keepers have to reinvest in the business.”

The latest NEPC survey contained data from 113 DC plans, covering 1.4 million participants with aggregate assets of $123 billion. Most of the plans were 401(k) plans, and most of the respondents were clients or prospective clients.

The latest survey also offered comparisons to the firm's first survey for the year ended Dec. 31, 2005. The comparisons include:

• Ninety-five percent used a diversified investment option as a default, up from 38%; and

• Ninety-six percent offered target-date or lifestyle funds, up from 74%.

Cost, complexity cited for the lackluster use of managed accounts

University of Nebraska to revamp 401(a), 403(b) investment lineups