Knocked to No. 2, Boston-based Fidelity Investments reported $528.8 billion as of June 30, down 3.4% from the previous year. It is the first time in the survey's more than 20-year history that Fidelity did not occupy the No. 1 spot. Fidelity spokesmen declined to comment on reasons for the decline.

Managers of proprietary mutual funds most used by DC plans
Ranked by total U.S. defined contribution assets, in millions, as of June 30, 2015.

In aggregate, the 25 largest managers of proprietary mutual funds used by DC plans ran $2.34 trillion in assets as of June 30, a 6.1% increase from last year.

The overall number for the top 25 is affected by Pacific Investment Management Co. LLC, Newport Beach, Calif., which did not complete the 2015 survey. (PIMCO was dropped from the top 25 in doing the year-over-year comparison.)

Kevin Jestice, principal and head of institutional investor services at Vanguard, said the firm has benefited from plan executives' growing adoption of target-date strategies and index fund tiers and increased participant allocations to those strategies.

Vanguard remained the target-date strategy leader in 2015 with $221.5 billion in assets, up 22.4% from 2014. Vanguard's institutional Index-Institutional Plus also topped the list of largest domestic equity mutual funds with $59.5 billion, up 16.4% from last year. Fidelity's Contrafund fell to second place, with $58.3 billion, down 5% from 2014.

Mr. Jestice said the rise in index and target-date assets is due in part to plan executives' search for low-cost investment options. Faced with regulatory, and other pressures, plan sponsors are becoming increasingly fee-conscious, he said.

John Galateria, managing director and head of North America institutional at J.P. Morgan Asset Management, added that re-enrollment and the expansion of target-date funds as a qualified default investment option have led to increased target-date assets. 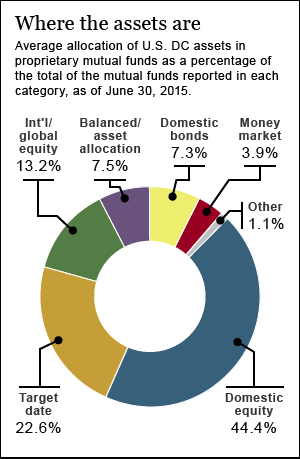 The defined contribution marketplace “really is migrating in a steady and strong way to being a target-date dominant area,” he said. J.P. Morgan's total target-date assets rose 41.1% to $67 billion as of June 30, keeping it in fifth place.

John Panagakis, TIAA-CREF senior managing director and head of asset management business development, also cited the rising popularity of target-date funds and index funds as part of TIAA-CREF's growth story. The New York-based firm advanced five positions in the mutual fund rankings to No. 9 with $45.6 billion in proprietary assets as of June 30, up 22.3% from 2014. During that period, TIAA-CREF's target-date assets rose 25% to $22 billion.

J.P. Morgan ranked third among the largest custom target-date managers with $12.3 billion. Although a small part of the overall universe, there is “a steady flow of (custom target-date) opportunities that come out year to year,” said J.P. Morgan's Mr. Galateria.

As defined contribution plans “continue to be an ever-growing share of the market” and plan design gets more comprehensive, it follows that plan executives are exploring custom target-date strategies, said Lorie Latham, a director at Towers Watson & Co. However, it takes “scale and buying power” to employ custom strategies, she said. Along those same lines, Ms. Latham said she has seen an uptake in DC outsourcing. Plan executives that want that customization but don't have a large internal staff may outsource.

Vanguard's Mr. Jestice said the cost of customization can be “fairly high.”

Alternative investments is another area that receives a lot of attention, but pickup rate seems low, Ms. Latham said. As of June 30, $12.4 billion of DC assets were in mutual funds that invest outside equity, fixed income, balanced strategies and money market funds — a small slice of the overall defined contribution market.

When deciding on alternatives, “great care” is given to their incorporation, Ms. Latham said. Plan executives are saying, “Let's not put it in as a stand-alone option. Let's do this in a portfolio context.”

There has been an appetite for commodities and real estate as part of a real asset or inflation-protection type of fund, said Drew Carrington, head of institutional defined contribution at Franklin Templeton Investments in San Mateo, Calif.

He added that non-traditional stocks and bond strategies, like unconstrained fixed income or international small-cap equity, are finding their way into larger plans via white-labeling.

Franklin Templeton's DC proprietary mutual fund assets rose 66.8% in the past two years to $32.7 billion as of June 30. Mr. Carrington attributed the increase in part to plan executives unbundling their plans' record keeping from investment management.

Vanguard rolls out funds with 0.01% expense ratio for institutional investors