Members of the California State Teachers' Retirement System investment committee will begin reviewing proposals later this fall that attempt to put the brakes on risk, a shift they hope will stabilize assets in the event of another major market meltdown.

Officials at the $191.3 billion West Sacramento-based fund could decide not only to reduce domestic equity exposure by more than 10 percentage points, but also whether billions of dollars should be invested in a new strategy combining Treasuries and alternative investments such as hedge funds.

CalSTRS already has a small, $2.5 billion, innovation and risk portfolio that includes $874 million in hedge funds, but changes suggested by consultants could expand that allocation greatly.

Equities make up about 57% of CalSTRS' total assets and 67% of the risk, CalSTRS documents show.

The new asset allocation proposals come amid tumultuous equity markets and capital market assumptions that predict a difficult environment over the next decade in achieving expected returns. In addition to CalSTRS, other big pension plans — including the nation's largest, the $292.88 billion California Public Employees' Retirement System — are moving to retool their portfolios to trim risk.

Steve Carlson, Chicago-based head of investments for the Americas at Towers Watson & Co., said public pension plans increasingly are following the lead of corporate plans, many of which began reducing equity exposure after the financial crisis in order to limit losses in case of an equity downturn. In turn, the plans are adding alternative beta to serve as a diversifier.

“They don't want to have all their eggs in one basket,” Mr. Carlson said.

CalSTRS returned 4.8% for the fiscal year ended June 30 and has an assumed rate of return of 7.5%. But because of losses during the financial crisis, projections had indicated the fund could run out of money by 2045, even if it met its expected rate of return each year. (CalSTRS lost about a quarter of its assets in the fiscal year ended June 30, 2009.)

At the investment committee meeting, board members directed investment staff and the system's two general consultants, Pension Consulting Alliance and Meketa Investment Group, to come up with a combined asset allocation plan with two options — one with the new risk-mitigating strategy made up of long-duration Treasuries and alternatives, and one without it, said Mr. Duran.

Those two options will be presented at the November meeting, and a final decision could be made at that meeting.

In an unusual arrangement, CalSTRS hired both PCA and Meketa as general consultants and assigned each to develop separate asset allocation plans for the period from mid-2016 to mid-2019.

While Meketa co-CEO Stephen McCourt has not recommended a specific proposal among the five, he focused on one — known as option C — in his Sept. 2 presentation.

In an interview, Mr. McCourt said option C has the most similar return risk characteristics to the current portfolio and a 7.5% expected yearly return but with decreased volatility, at 13.2% from 14.4%.

Meketa included the risk-mitigating strategy in option C, allocating 9%. Across the five proposed allocations, that strategy ranges from zero to 12%.

Meketa also recommended CalSTRS increase its infrastructure allocation to 5% from the current 1% — but that might not be so easy. Investment staff in a memo in connection with the Meketa proposals noted that “reaching a significant higher level of investment in infrastructure could be challenging” due to “aggressive pricing” and “the need to thoroughly review both managers and individual infrastructure opportunities,” among other reasons. 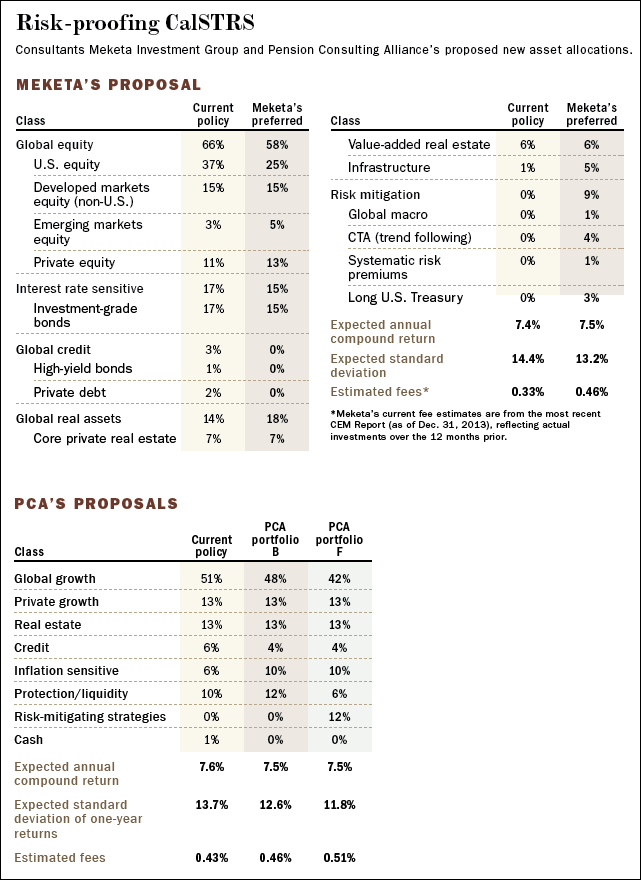 PCA, in its presentation, termed two of its four options “more attractive.”

Of those preferred plans, one reduces CalSTRS' domestic equity exposure by 11 percentage points while increasing international equity by two percentage points and decreasing fixed income by four percentage points, to 14%. This proposal also presented the new risk mitigating strategy made up of Treasuries and alternative investments that would comprise 12% of the portfolio.

Because it is a mature pension system, CalSTRS is paying out approximately $6 billion a year more in benefits than it receives in contributions. Mr. Rue said that $6 billion would be the approximate cash yield on the portfolio.

One challenge, he said, is that severe losses could go beyond that cash yield, making it more challenging for the system to rebalance its portfolio during a significant down market.

The risk mitigating strategy is not without controversy. PCA, in its Sept. 2 presentation, said the long U.S. Treasuries that would make up 35% of the asset class are also “very risky” because they have an estimated annual volatility rate of 20%. But the firm said the alternative investments would counter volatility.

Under PCA's plan, systematic trend-following investments — which go long in rising markets and short markets that are falling — would make up 40% of the asset class. Global macro hedge fund strategies would comprise 15%, and alternative risk premiums would be 10%.

Introducing the risk mitigating strategy would also increase CalSTRS costs because of fees to be paid to alternatives managers. PCA estimates in one scenario that CalSTRS would pay $982 million in fees, up from the current $821 million, if risk mitigation were implemented.

Meketa also sees an increase in fees due to alternatives and infrastructure investments.

The asset allocation plan is scheduled to go into effect in July 2016 but some changes, such the risk mitigating strategy, could take several years to implement, PCA said.

CalSTRS' asset allocation as of June 30