China-focused funds down, but not out

Returns remain in positive territory for year despite pounding by markets

Two bloody months for China-oriented investments won't ruin the year for hedge fund managers that focused on investing in the world's second-largest economy, but some suffered painful wounds.

Hedge fund managers — even those not focused on China, but with exposure to the country — were not immune to the combined effects of the precipitous decline in the Shanghai Stock Exchange in July, the abrupt devaluation of the renminbi and a cut in interest rates by Chinese authorities in August.

The turmoil roiled global markets and rocked the HFRX Global Hedge Fund index, produced by Hedge Fund Research Inc. The broad index was down 2.2% in August and down 1% year-to-date through Aug. 31.

China-focused hedge funds declined 9.9% in July but were up 8.5% year-to-date through July 31, data from eVestment LLC showed.

“Despite the decline, (China-focused hedge fund) returns for the year are still among the industry's best and the universe is producing average performance well above China equity benchmarks,” said researchers for the Marietta, Ga.-based data provider in their July performance report.

Hedge fund index returns are not yet available for August, but based on the returns of the first few China-focused hedge funds to report monthly results, the range is between -2% and -7%, estimated Yu Mei Kemmy Koh, managing director and an Asian long/short equity sector specialist based in the Singapore office of hedge funds-of-funds manager Pacific Alternative Asset Management Co. LLC. 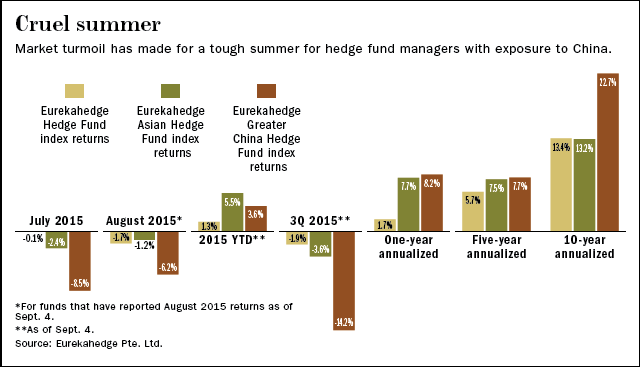 PAAMCO's Ms. Koh agreed, noting there was quite a bit of performance dispersion among China-focused hedge funds in July, and as for how well they set themselves up for August, she said it “all depended on what they did in July” in response to Chinese market, policy and economic gyrations.

A number of China-focused hedge funds were net long going into July because they had benefited from a rally in the Hong Kong-listed H-share market and those firms that “took risk down and reduced their growth bets and net long exposures probably have done pretty well in August,” Ms. Koh said.

By contrast, those firms that decided to increase their risk by buying up what they perceived as cheap value stocks “probably were hurt in August,” she added.

Sources noted that as painful as the two months of trauma were for specialist China hedge fund managers, many likely will still end the calendar year with positive returns.

Aksia's definition of “Greater China” includes countries that have ties to mainland China and are heavily influenced by its economic health, such as Hong Kong, Taiwan, Singapore and South Korea, Mr. Vos said.

One reason for the wider categorization is that most China-focused funds use a long/short equity strategy and can only trade domestic A shares or offshore H shares and American depository receipts, while relative value, event-driven and multistrategy hedge fund managers are free to trade more broadly throughout the region to take advantage of China themes.

Aksia's initial estimated returns for China-focused long/short equity funds were down net of fees in mid-single digits in August, but were up year-to-date Aug. 31 ranging between 10% and 20%.

By contrast, Aksia's initial estimated returns for relative value/event-driven/multistrategy Asia-focused managers were generally down 1% to 2% in the month, but up between 5% and 10% year-to-date Aug. 31.

Many of the hedge funds that are not focused on China or Asia that did produce positive returns in July, August and year-to-date through Aug. 31 made their money by investing long or short in other markets, based on trends emanating from or affected by China, market observers agreed.

Omni Partners LLP, London, for example, has been expressing a bearish view on China since January 2014, believing the country's stock markets were overly bullish and being skeptical of official economic growth rates, said Andrew Relph, marketing and investor relations manager.

Instead, the firm's view on China was expressed by shorting copper as a proxy for the country's slowing economic growth (China is a large consumer of copper) and shorting the CNH (offshore) renminbi because portfolio managers there believed the currency to be overvalued, Mr. Relph said.

The copper short trade stopped earlier this year, but the CNH short trade remains because “our focus is on the fundamentals of the Chinese market” and Omni Partners' investment team still thinks the currency is overvalued.

Assets managed in the Omni Macro strategy totaled $395 million as of Aug. 31.

Industry sources are markedly divided about the prospects for hedge fund investment in mainland China.

On one side of the debate, Aksia's Mr. Vos said: “The less efficient markets are, the better for hedge funds.”

He stressed that the inefficiencies of Greater China markets, characterized as they are by massive retail investor flows, government industrial policy changes and gradual reform, create “good opportunities for hedge funds. The shorting (possibilities) in a retail-dominated market are fantastic.”

Firmly on the other side of the issue, Troy Gayeski said: “Should you be invested in China? Absolutely not!”

Mr. Gayeski is senior portfolio manager at hedge funds-of-funds manager SkyBridge Capital II LLC, New York, and was adamant that “this is a great teaching moment about where investors should invest and where they shouldn't. In China, economic outcomes have nothing to do with market outcomes. It isn't a rational place to invest.” n

Despite uncertainty, some still see promise with China