With property prices high, firms are seeing value in privatizations

Flush with cash, real estate managers are buying up real estate investment trusts to take advantage of the gap between public and private valuations — a sign the commercial real estate market is in the last stages of its cycle, managers said.

REIT share prices have suffered this year, trading roughly 15% below net asset value after trading at a premium last year.

Privatizations give REIT portfolios and equity portfolios with REIT exposure a boost in returns and offer properties at cheaper prices, industry insiders say. But privatizations also offer evidence that while the top of the market might not be around the corner, it's definitely in the neighborhood.

“There's no question that privatizations tend to happen later in cycles,” said Cedrik Lachance, managing director at Green Street Advisors LLC, a real estate research and advisory firm in Newport Beach, Calif. “There was a significant wave (of privatizations) from 2005 to 2007 and since then it's been largely quiet.”

The quiet ended this year. Three REIT privatizations have occurred so far in 2015, two of them in the multifamily housing business.

In June, Home Properties Inc. announced it was being acquired by real estate firm Lone Star Funds in a $7.6 billion deal. In April, Associated Estates Realty Corp. announced its sale to real asset manager Brookfield Asset Management Inc. for $2.5 billion. Also in April, Excel Trust Inc., a REIT specializing in commercial strip centers, announced it was being purchased by Blackstone Group for about $2 billion.

REITs hold a treasure trove of properties, owning roughly $1.7 trillion of commercial real estate assets as of June 30, according to the National Association of Real Estate Investment Trusts, a Washington-based trade group.

Real estate managers have cash to burn. Managers of real estate equity held a record total of $249 billion in unspent capital commitments as of June 30, which has not been easy to invest in light of increased competition and rising property prices. So managers are taking advantage of the drop in REIT share prices to scoop up underlying portfolios at lower prices than buying the properties individually.

“There's no question today that there is a wall of capital — domestic and global — that wants to own U.S. real estate assets, and so if they (real estate managers) see the opportunity to buy a REIT at a price below where they would be purchasing similar assets in the private market, the likely result is more REIT privatizations,” said J. Scott Craig, vice president and portfolio manager with Eaton Vance Management in Boston.

REIT privatizations slowed down considerably after 2007, when 14 REITs worth a total of $122.5 billion were taken private, according to data from NAREIT. The largest transaction — Blackstone Group's $39 billion takeover of Sam Zell's Equity Office Properties Trust in 2007 — ended up marking the top of the last commercial real estate cycle. Despite the high price Blackstone paid, the firm recently indicated it expects to triple its money from the investment.

Only two REIT privatizations occurred in 2014, valued at a combined $1.1 billion, and only one was done by a real estate manager. GoldenTree Asset Management LP acquired Origen Financial Inc., a REIT that invests in manufactured housing, in September for $456 million.

Industry experts say privatizations should increase this year as long as share prices remain below property valuations. REITs have been falling this year since January's peak, setting the table for the three privatizations so far this year, Mr. Craig noted.

On Aug. 17, another REIT — Strategic Hotels & Resorts Inc., which owns high-end hotels and resorts — announced it had hired J.P. Morgan Chase & Co. to act as financial adviser to explore “strategic alternatives” including a potential sale of the company.

“If current trends prevail, we are likely to see more,” Mr. Craig added. 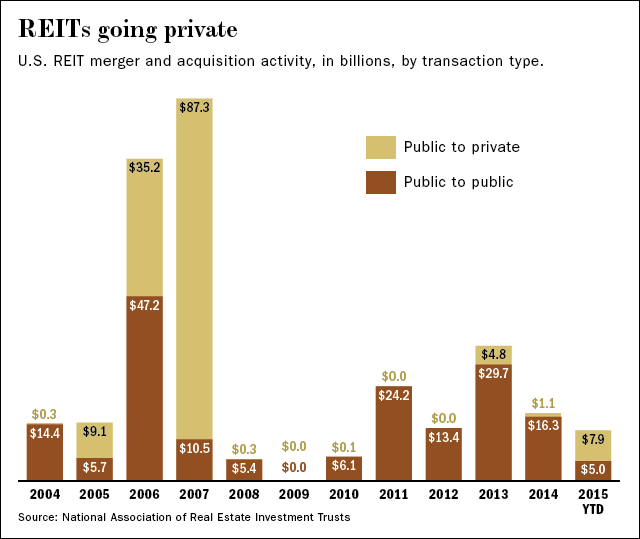 “If REIT prices stay depressed at these levels at greater than 10% discounts to NAVs, then, yes, I think there will be more privatizations of REITs. There is a lot of money in the hands of private equity investors looking to buy real estate and if the discounts remain in the public market, it makes sense that there will be more buying of public company portfolios.”

While Mr. Ferguson does not think increased privatizations signal a top of the market right now, “this is a clear case where the views of public and private market investors have temporarily diverged.”

But this investment opportunity will not last forever. “Over time, these pricing discrepancies usually get arbitraged away,” Mr. Ferguson said.

“Private equity (real estate) can unlock a lot of value from these portfolios where they have assets not core to the mission of the public entity and for REITs that no longer want to be beholden to the quarterly reporting demands of Wall Street,” Mr. Julier said.

Green Street's Mr. Lachance said real estate prices, while higher than REIT share prices, are pretty stable. “Real estate prices are unlikely to grow in the next six months,” he said. “We are in a period of general stability.”

Managers specializing in REITs are buying up shares of those REITs most likely to go private “to realize the private market value of the assets,” he said.

Public to private to ...

REITs do appear to be in the sights of real estate investors, noted Justin Knight, president and CEO of Richmond, Va.-based Apple Hospitality REIT Inc., a former private non-traded REIT that went public in May. “Several public hospitality companies have recently made public their intention to explore strategic options including a potential sale,” he said.

Even though Apple REIT has only been publicly traded for about three months, the board would entertain a buyout.

“As a company, we continue to believe there is a great deal of potential in our portfolio and remain focused on executing our proven strategy,” Mr. Knight said. “With that said, we will carefully consider any opportunity that has the potential to create or enhance value for our shareholders.”

Blackstone is still La Quinta's largest shareholder, holding roughly 27%, he said. He noted La Quinta has had five ownership structures in 21 years. Mr. Goldberg has been with the company for 16 years.

“To me, "who controls, who owns' doesn't matter as long as we have the right people, the right brand ... the best job security is to be part of very profitable company,” he said. n