U.S. bonds make up the largest portion of outsourced insurance assets, according to a survey by Patpatia & Associates, Berkeley, Calif., a consultant that tracks insurance outsourcing.

The survey found 62.5% of outsourced assets in 2013 were in U.S. bonds, up from 53.6% in 2011. The survey does not break down the assets between core and high-yield bonds, but Sunny Patpatia, president and CEO, said much of the increase in fixed-income outsourcing has been in non-core, higher-yielding strategies. The 2013 figures are the most recent survey data available. 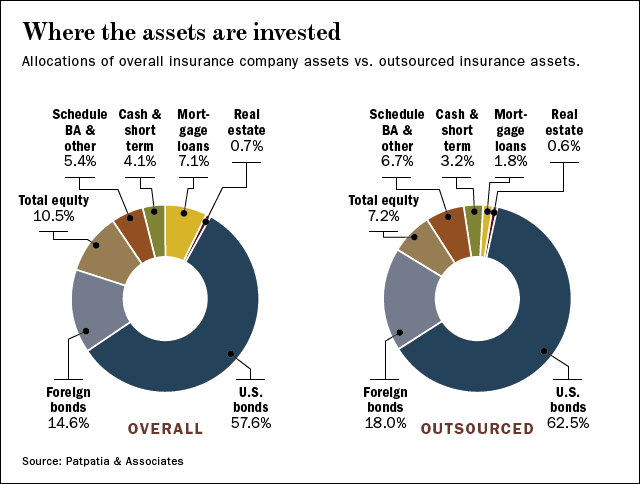 The survey covered 60 managers that control about 90% of the U.S. market for outsourced insurance assets.

Mr. Patpatia said small insurers with general account assets of $1 billion to $5 billion and boutique companies with less than $1 billion in assets are the largest category of insurers that use investment outsourcing.

Their share of total outsourced assets declined from 50% in 2011 as midsize insurers (those with assets between $5 billion and $25 billion) made up a larger share of the outsourcing pie. Overall, outsourced insurance assets still were increasing for the smaller insurers but at a lower rate.

The survey found that the biggest growth area for insurance outsourcing has been midsize insurers. Those insurers made up 35.7% of total outsourcing in 2013, up from 19.5% in 2011.

Large insurers — with assets of more than $25 billion — accounted for 23% of insurance outsourcing in 2013, compared with 30.2% of the total outsourced in 2011. Mr. Patpatia said the decline came as large insurers have continued to expand their in-house investment divisions to manage non-core fixed income, equity and alternatives.

While the overall share of outsourced assets that comes from large insurers is down, large firms continue to add external management for niche investment strategies such as private equity and hedge funds to supplement their own internal investment departments, Mr. Patpatia said.