A series of recent acquisitions by Emmanuel “Manny” Roman, CEO of Man Group, and his management team has led to the firm's doubling its assets under management in the past five years, plus a chance to finally plant a flag on U.S. soil.

Man is riding high on the back of recent institutional wins — a $1.2 billion institutional hire for its quantitative unit, AHL Partners LLP; a more than $1 billion hire by a U.S.-based state pension fund for hedge funds-of-funds unit FRM, and $380 million of funds-of-funds hires by U.K. local authorities.

A strategic decision to change the company's focus has led to assets from institutional clients accounting for 73% of the total $78.8 billion under management, up from 32% of $34.9 billion in 2010.

The turn came in part with Man's acquisition of GLG Partners, which was “very much an institutional business,” in 2010, said Mr. Roman, speaking in an interview at his London office. Mr. Roman, who had been co-CEO at GLG, became chief operating officer at Man, and in February 2013 became CEO.

“When GLG was acquired by Man Group, there was a clear shift in strategy, under new leadership, in terms of what we wanted to achieve and what we wanted to do. We wanted the company to service institutional clients and be very much focused on that market,” he said.

“I am impressed with U.S. pension funds that didn't really blink when markets crashed in 2008 — they stuck to their strategies and have recovered well.” The opportunity to build relationships and work strategically with institutions “is very powerful,” he said.

The switch in focus and work by Mr. Roman and his team is winning over other observers.

“We recently upgraded Man Group to outperform (from sector perform), and one reason is that the business is becoming more diversified and institutional,” said Peter K. Lenardos, London-based analyst at RBC Capital Markets. “Institutional business, while lower margin, is also more stable with greater longevity.”

The firm is in “much better shape since (Mr. Roman) took over,” with a restructuring of the balance sheet, “dramatically lower” cost base, and diversification of the business, Mr. Lenardos said.

One investment consultant, who spoke on the condition of anonymity, acknowledged that Man Group is a different business now, “in terms of ... (their) services and offerings, and the way they run themselves.”

The institutional focus has resonated well with asset allocators and pension funds, the consultant said. “Institutional clients are looking less to appoint a manager, but more for a partnership — they want to ensure (the manager is) there for the long run, and has their best interests in mind. It is about understanding what institutional investors want. They want to pick up the phone and feel that the manager is there” for them.

When it comes to Man Group, the consultant said approval is “coming from building (a) more institutional asset base, a business less-focused on one core area (and) having abilities outside one particular niche.”

A good part of asset growth has come from carefully selected acquisitions, deals that collectively added almost $22 billion in assets under management in the past two years.

“We focus on organic growth, but from time to time there will be things that we cannot do ourselves,” Mr. Roman said. 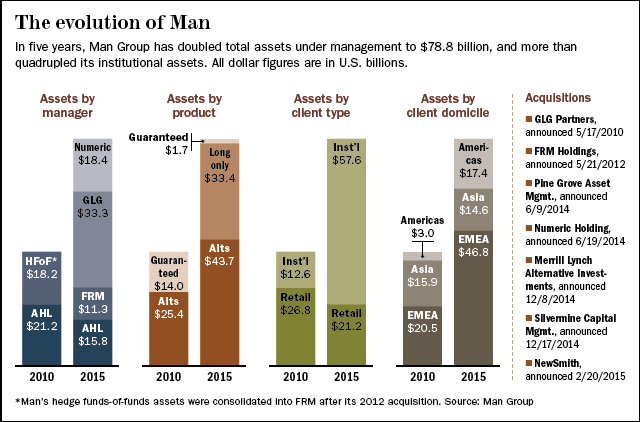 Also that month, the firm said it would acquire the investment management contracts of Merrill Lynch Alternative Investments LLC's hedge fund-of-funds portfolio, totaling $1.2 billion, expanding FRM's hedge funds-of-funds and managed accounts business. “We benefited (from that deal) significantly because it gave us a way to access the distribution” of Bank of America Merrill Lynch, Mr. Roman said.

In August 2014, the firm closed on its acquisition of U.S.-based hedge fund-of-funds business Pine Grove Asset Management LLC, which has offices in Summit, N.J., and New York, and specializes in credit-focused portfolios. It added $1 billion in AUM.

But the jewel in the acquisitions crown is Boston-based Numeric Holdings LLC. The deal closed in September 2014, and added $14.7 billion of mostly institutional assets.

“(That) was our largest acquisition in 2014, and has significantly changed the composition of Man Group,” Mr. Roman said.

Numeric, Pine Grove and Silvermine also satisfy Mr. Roman's second desire — to crack the U.S., a market that is “incredibly important to us. We are investing in the U.S., and you can expect us to add resources there.”

The firm has increased assets under management from North American clients — 22% of the total assets now comes from the region, compared with 8% in 2010. Still, “there is plenty of room to grow ... I'm totally committed to North America — I see it as mandatory,” Mr. Roman said.

Success in the U.S. would mark another big change for Man Group.

“They have given the U.S. a go five or six times in the past, and have largely failed,” RBC's Mr. Lenardos said. “That is why we are now seeing them make selective acquisitions in the U.S., for diversification and distribution purposes. An asset manager like this — one of the leading global alternative asset managers — needs to be in the U.S., and positioned for institutional business.”

While the changes have earned positivity from external sources, there's still work to be done. “They need, from an investor point of view, to rebuild credibility in the company name, which they have got with this management team,” Mr. Lenardos said.

Parts of the firm have suffered from poor performance in the past, the share price has fluctuated, and the firm faced pressure in 2012 to change things at the top.

“The past still haunts them,” Mr. Lenardos said. “It is a hard company to model and to see how sustainable this growth is. It is going to be a long-term story, but they are doing all the right things.”

And there have been stumbles more recently. The firm's most recent half-year results, published July 29, highlighted the effects of turbulent markets in the three months to June 30 in particular — wiping out gains that AHL's momentum strategies had made in the first quarter. For the six months to June 30, Man recorded net outflows of $2.6 billion.

“Man has gone from net outflows, to net inflows, back to net outflows,” Mr. Lenardos said. “They need to turn that flow picture around.”

Despite the institutional hires, flows were skewed by $3.4 billion of net outflows from the Japan CoreAlpha strategy. In a statement accompanying the results, Mr. Roman said “some investors redeemed following a long period of strong absolute and relative performance.”

The quant side of the business, however, fared better. For the six months ended June 30, quant units AHL and Numeric recorded $1.8 billion of net inflows.

“Having quant in the firm's DNA is important. I'm very excited about the future of quant,” Mr. Roman said.

“I have been in this industry for 28 years, and the evolution over that time has been incredible. ... People forget where we came from — 97% of execution today is algorithmic. (When I started,) trades were made on slips of paper. ... There will be a big change in how we see people evolving and how we adapt skills” around the information age.