Sophie Baker
Reprints Print
Konstantinos Tsakalidis/Bloomberg
Despite uncertainty in Greece, investors still believe there will be a broader European recovery.

As crunch time looms for Greece and its future — be it in or out of the eurozone — money management executives will be closely watching the European equities, bonds and currency markets for increased volatility, and the chance to add to their positions.

Executives said they have maintained existing overweights to European assets.

As Pensions & Investments went to press July 10, their belief was that — whatever the outcome relating to proposals put forward by the Greek government to the European Union and discussed at meetings over the weekend — positive earnings and growth in Europe will carry the region through.

The meetings follow a July 10 conversation among Greece's creditors, looking at the latest proposals; a referendum July 5, in which the Greek people rejected EU-imposed austerity measures; and what sources have labeled one of the best games of political chess they have ever seen.

The fact that Greece met its deadline to submit new proposals, which sources in the money management industry said were more austere than the government previously had suggested, buoyed markets. The Euro Stoxx 50 gained 3.18% July 10, vs. its July 9 close. The euro also reacted, with a 1.13% gain as of 5 p.m. EDT on July 10. Yields on European bonds remained steady July 10.

“It looks like markets are taking it as a deal is done,” said Richard Benson, London-based managing director, co-head portfolio investments, at Millennium Global Investments Ltd.

However, sources warned, while a compromise now looks more likely than a Greek exit from the eurozone, markets could be in for a shock. “Quite how a more austere package can be agreed after the last one was rejected by popular referendum rather escapes me,” Mr. Benson added.

“It appears that the Greek government has capitulated and offered almost exactly the same deal that a referendum rejected only a few days ago,” added Paul Lambert, London-based head of currency at Insight Investment in a July 10 interview. “The complication now is that it is a new program, and as such has to be ratified by all of the EU parliaments. Some may be more reluctant than others to back new money for Greece.” Mr. Lambert said a compromise is a “high probability rather than a certainty,” and that any discussion over the weekend likely will not answer questions over bank recapitalization and debt rescheduling.

Still, observers said they are not particularly worried about ongoing opportunities to invest in the region.

“Investors have had five years to get their portfolios ready for what is an uncertain and fluid situation in Greece,” said Audrey Kaplan, head of the international equity team, senior vice president, senior portfolio manager, at Federated Investors Inc. in New York. “But we still believe we are in a moderate recovery in Europe, whether that is Ireland, which put out stronger growth figures and forecasts; or Spain, Italy and Germany, which are benefiting from the cheap euro and have bigger export economies. Any volatility on the back of (the situation in Greece) would be a buying opportunity.”

“Whether we have an agreement (for Greece) to stay in the euro, or a worst-case scenario of a Grexit, we think at some point there will be better buying opportunities for European equities,” said Tim Crockford, a London-based portfolio manager within the European equities team at Hermes Sourcecap, part of Hermes Investment Management. “We still say the macro recovery in Europe is good — consumer confidence is up, and demand in the eurozone is up. Look no further than the auto sales growth — that is stronger than anywhere else in the world.”

Europe's difficult years after the 2008 financial crisis also have worked in its favor, since it forced companies in the region to reconsider their operating models.

“There has been a focus on improving efficiency and addressing the cost base in order to cope with a low-growth environment,” said Martin Todd, also a London-based portfolio manager within the European equities team at Hermes Sourcecap. “We expect that when the uncertainty around Greece recedes, investors will start focusing on earnings coming out of Europe, that there is potential for a positive surprise there.” Couple that with the European Central Bank's €60 billion per month quantitative easing program, which is set to run until September 2016, and the pullback that Greece has had on Europe valuations, and there is opportunity.

“Greece is distracting a lot of investors from what is a good underlying story — whether there is a Grexit or not, just the removal of that uncertainty will spur a rally and renew confidence,” Mr. Todd said.

Money managers also are looking at the reaction from the markets to the response to the referendum, which received a 61% “no” vote. That margin was unexpected, yet markets were not hit as much as expected.

Meanwhile, in the bond markets, little effect from the unexpected referendum outcome was seen outside of Greece.

“The reaction of the market both to the announcement of the referendum and the outcome, both which were unexpected and negative developments, have in many respects been remarkably moderate and contained,” said David Riley, head of credit strategy at BlueBay Asset Management LLP, in London.

Also, “the infrastructure across Europe is much more stable than it was before — banks are better capitalized, the ECB has more deployable tools than back in 2012, and the European economy is on a trajectory for recovery, not decline,” said John Bilton, managing director, head of global multiasset strategy for the multiasset solutions team at J.P. Morgan Asset Management, in London. “That means that any financial contagion is much more manageable.”

While money managers, investors and the markets have been relatively sanguine about the situation, most said they had either no or very little exposure to Greece — one manager, who asked not to be identified, has a very small holding in Greece GDP-linked warrants, which were issued in 2012 as part of the country's debt restructure.

However, in preparation for any outcome of the latest round of negotiations, and despite the overall positive sentiment toward Europe as a whole, some managers have been trimming sector and individual country exposures. 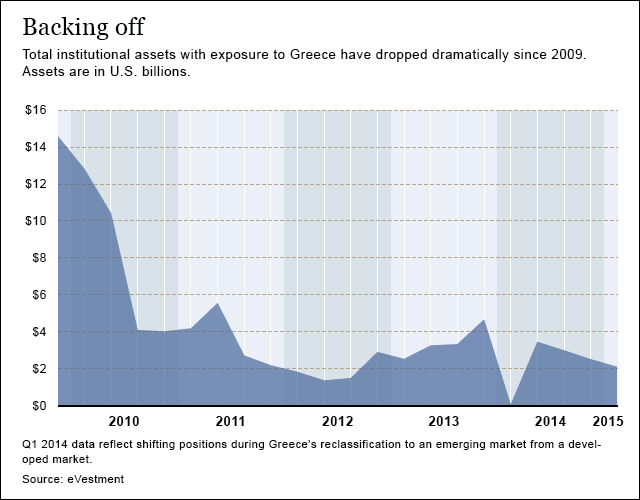 “Outside Greece, the most affected area will be the banks,” Hermes Sourcecap's Mr. Crockford said. “If you have contagion and yields rise in Spain and Italy, their banks will be negatively affected if (Mario Draghi, president of the European Central Bank) cannot control that through quantitative easing.”

Hermes Sourcecap is underweight European banks and peripheral banks. It is also underweight France and has no holdings in Portugal, which Mr. Crockford said is desirable because these nations' corporate financing requirements are more reliant on the corporate bond markets, relative to the rest of the eurozone.

“We are continually stressing the portfolio with different scenarios and figuring out how covered we are. But the honest truth is that traditional risk modeling will never perfectly predict the portfolios' reaction in situations like this,” Mr. Crockford said.

When to pull the trigger

While the lack of big swings in asset prices is a positive factor for Europe, and the market continues to be attractive, money managers are not quite at the trigger point for adding to their existing overweights.

“We are not yet jumping on this buying opportunity — which we think this is going to be — as we want more confirmation of the market bottoming out,” said Wouter Sturkenboom, senior investment strategist, Russell Investments, in London. “We will wait for either one of three triggers: a signal from our sentiment building block; ECB actions — if peripheral spreads over Germany widen to about 200 basis points they would step in, which would be an obvious buy signal; and if negotiations go well and a deal develops, that would be a buy signal as well.”

The firm, which has $272 billion in assets under management, already has small overweights to Europe, but has “held off buying more because of uncertainty around Greece,” Mr. Sturkenboom said.

“We wouldn't be viewing this as an opportunity to add risk and buy risk assets, increasing exposure to credit or eurozone peripheral bonds,” added BlueBay's Mr. Riley. “We don't think we have had a market adjustment (that is) sufficient as a strong buying opportunity.”

However, Mr. Riley warned that should a buying opportunity arise, investors will have to move fast to benefit.

“It could be relatively short-lived. Over time investors have been conditioned to think that, as long as we have a credible central bank that we believe will be a backstop in the market, we should be engaged in a strategy of buying on the dip. Because of that, dips get ever more shallow and short-lived,” Mr. Riley said.