Firm finally seeing inflows, but can it measure up to the competition?

Reprints Print
Michael Martin
Janus' Richard Weil: '(Bill Gross asked me), 'if I became available, would you have a place for me at Janus?' My jaw dropped. … Of course we'd want' him.

Janus CEO Richard Weil has beaten the odds by staying more than five years at a company where CEOs have come and gone quickly.

But the verdict is still out as to whether Mr. Weil can bring the company's financial metrics up to the level of its competitors, analysts and consultants say.

He became Janus' fifth CEO in just eight years in February 2010, with a clear mandate from the publicly held company's board to improve inflows and financial results.

The Denver-based money manager, which has $190 billion in assets under management, gained a combined net $3.1 billion during the fourth quarter of 2014 and the first quarter of 2015. That's due in part to Janus' fundamental equity strategies. With net inflows of $1.8 billion, the first three months of 2015 marked the first quarter since 2009 that fundamental equities have had net inflows.

For years, Janus' financial performance has lagged that of its publicly traded competitors. The company reported an operating margin of 27.49% in 2014, compared to a peer average of 29.68%, Bloomberg LP data show, while its return on equity to shareholders was 10.17% in 2014 vs. the peer average of 28.35%.

Janus' 2014 operating margin was the largest in more than a decade, but the company still finished the year with almost $5 billion in net outflows despite the fourth-quarter inflows. 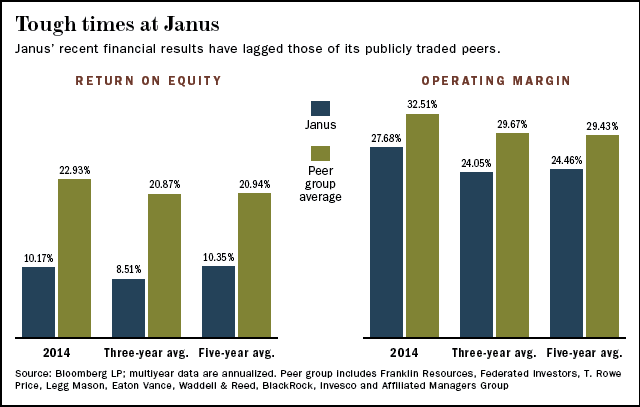 Assets under management have grown largely because of overall stock-market performance, not because of inflows. Mr. Weil has brought in a new management team for the flagship fundamental equities business, championed the expansion of the firm's global fixed-income business, added alternative strategies, and in a move last September that focused worldwide attention on Janus, gave a new investment home to William H. Gross.

“It's definitely a work in progress,” Robert Lee, a managing director and equity analyst with Keefe, Bruyette & Woods in New York, said of Janus. “You can't declare victory after two straight quarters of better flows.”

While progress has been made in turning equity-centric Janus into a more diversified asset manager, Mr. Lee said much more needs to be done. Particularly, he said, Janus executives need to show they can build Janus' presence beyond its predominately retail focus

“They have not had a huge presence in the institutional market” compared to many other publicly traded money managers, Mr. Lee said. “It's still a market they need to demonstrate that they can have success in.”

Some 22% of Janus' $190 billion in assets under management were institutional as of March 31, down five percentage points from Dec. 31, 2009, two months before Mr. Weil took over the firm, company statistics show.

Sources familiar with Janus' operations say Mr. Weil has been under pressure from the board of directors to improve the firm's financial results and stop overall redemptions by investors.

In an interview, Mr. Weil, who joined Janus after serving as chief operating officer at Pacific Investment Management Co., said he has made diversifying Janus' strategies beyond equities a key goal:

“It's a fool's errand to try and be everything to everybody, but it's also a fool's errand to be a really narrow single-product provider. You have to be in a middle ground where they can have a sustained trusting relationship with you over time.”

Janus statistics show as of March 31, assets in the firm's more than two dozen fundamental equity offerings account for 47% of Janus' $190 billion in total AUM, down six percentage points from the end of 2009.

More than $2 billion of the fundamental equity assets are in institutional separate accounts or the institutional share class of the Janus Mid-Cap mutual fund, show data from eVestment LLC, Marietta Ga.

Mr. Weil said he also has made a broad effort to increase institutional assets, including naming Nobel laureate Myron Scholes as chief investment strategist on a part-time basis to help institutional clients with portfolio construction.

Janus' institutional fixed-income assets totaled $5 billion as of March 31 from practically nothing at the end of 2009. Fundamental equities saw a jump to $3.5 billion from $1.9 billion in the same period.

Contributing greatly to the firm's decline in institutional assets were outflows at its quantitative equity subsidiary, INTECH.

Mr. Weil said INTECH has suffered from both performance issues in some of its U.S. equity strategies and a trend by institutional clients to barbell their portfolio, investing in both passive and active strategies. “INTECH can be left in the middle, they are neither passive nor wildly risking,” he said.

INTECH CEO Jennifer Young stepped down at the end of 2012 and Mr. Weil assigned the title to Adrian Banner, the firm's chief investment officer.

Mr. Weil praised Mr. Banner for better integrating INTECH's Princeton, N.J.-based investment team and the sales and marketing teams in West Palm Beach, Fla., saying efforts weren't as coordinated as they could have been. Mr. Weil would not go into detail on the reasons surrounding Ms. Young's departure.

Mr. Weil also has faced issues at a smaller Janus subsidiary, Perkins Investment Management in Chicago, which manages around $10 billion. Perkins CEO Peter Thompson left at the end of last year and his successor, Jeff Kautz, stepped down in early April. The firm has subsequently lost its director of research and a research analyst.

Sources say disagreements between Mr. Weil and senior management at Perkins over the firm's underperformance in its value equity strategies had created tensions.

Another diversification effort by Mr. Weil, launched in early 2013, was to offer separate liquid alternative funds for institutional and retail investors. It has not fared well. The strategies combined have attracted less than $70 million as of March 31, company statistics show.

Acknowledging the strategies have “gotten off to a slower start than we would have liked,” Mr. Weil said he remains optimistic they will eventually garner investor interest.

Mr. Weil's most visible move was the hiring of Mr. Gross, who had been one of Mr. Weil's bosses at PIMCO.

“My secretary called me and said "I've got Bill Gross on the phone for you,' he recalled. Mr. Weil said Mr. Gross then asked him, “'If I became available, would you have a place for me at Janus?' My jaw dropped. ... Here is the greatest fixed-income investor over the last 40 years on planet Earth, and we run an investment company. Of course we'd want” him, Mr. Weil said.

Analysts who cover Janus had predicted Mr. Gross could bring as much as $45 billion to Janus by the end of 2016. So far, however, the unconstrained fixed-income fund Mr. Gross is running has attracted $1.5 billion, with a little less than half of it being Mr. Gross' own money.

Mr. Gross had managed as much as $300 billion as portfolio manager of PIMCO Total Return Fund.

An investment consultant who requested anonymity said Mr. Gross' sudden departure from PIMCO and his subpar investment record in his final year there have made institutional investors uneasy about moving assets to his strategy at Janus. He said Mr. Gross will need to demonstrate a multiyear track record of strong performance before he starts getting institutional money.

But consultant Michael Rosen, founder and CIO of Angeles Investment Advisors, Santa Monica, Calif., believes institutional money could flow to Mr. Gross sooner than the usual three-year track record if he can adequately articulate his investment process to potential investors.

Mr. Weil said he is pleased with the amount of assets Mr. Gross has raised so far.

“The assets raised and the success so far have been significant on a Janus scale and we feel good about it,“ he said. “Where questions get raised is when people compare it to a PIMCO scale, and that's not really relevant to who we are and what we're doing.” n

The bond king has left the building

Gross' fund at Janus suffers estimated $13 million in May outflows