In a year of poor equity returns, assets of the world's largest retirement funds rise 1.9%

The world's largest 300 retirement funds grew 1.9% in 2011 to $12.7 trillion, according to the annual survey conducted by Pensions & Investments and Towers Watson & Co.

“In a year when global equity markets performed as poorly as they did, it wasn't a terrible year, on a relative basis,” said Carl Hess, global head of investments at Towers Watson in New York.

Despite relative outperformance of U.S. equities vs. other world markets in 2011, the share of U.S. retirement assets in the megafund ranking continued its “slow erosion,” Mr. Hess noted. “This isn't so much about what's happening in the U.S. as much as the great growth of funding elsewhere.”

For the five years ended Dec. 31, 2011, assets in North America dipped slightly by an annualized 0.1%, while assets in Asia-Pacific and Europe rose 9% and 6%, respectively, in the period. The U.S. had 121 funds on the list in 2011, down 19 funds since 2006. During that period, Australia added eight funds to a total of 15 in 2011, while Germany and Mexico each added four to bring their respective totals to 12 and eight.

The growth of Mexican funds is just starting to reflect the strength of a 1997 reform of that country's pension system, moving to a funded arrangement from pay as you go, Mr. Hess said. “This is what it was intended to do. We're just getting there now,” he said.

Executives at five of the 20 largest funds expressed concern in their annual reports that investment returns were being depressed by low interest rates, and that the trend was far from over. For example, the $121.6 billion ATP, Copenhagen, wrote in its report that “the task of securing the necessary assets to meet the pension commitments made to members has been rendered significantly more difficult by low interest rates, combined with increasing life expectancy.”

On the plus side, as investors have crowded into bonds, yields have dropped, resulting in equity-like returns. The Citigroup World Government bond index rose 6.4%, while the Barclays Capital Aggregate index rose 7.8% in 2011. Those were trounced by the BarCap Long Government/ Credit index, which rose 22.5%.

Also, declining bond yields have pushed up calculations of liabilities at many defined-benefit funds. That's elicited fresh contributions from employers in some cases, however those flows have been “not enough to tilt the scales” when it comes to the largest funds in the world, Mr. Hess said.

The Government Pension Investment Fund, Tokyo, again held the top spot on the list with $1.395 trillion, a 2.6% decline from the 2010 ranking. The fund has remained atop the ranking since 2002, and is in no danger of losing out to No. 2 ranked Government Pension Fund Global, Oslo, with $576 billion in assets.

Japanese funds have risen by an average 5.5% each of the past five years in U.S. dollar terms, however, they've declined by an annual 3.2% in local currency terms, as the yen as appreciated against the dollar an average of 9% each year since 2006.

Assets of funds in Switzerland, Australia and China were similarly flattered by annualized currency increases of 5.4%, 5.2% and 4.2%, respectively, while the currencies of Mexico, the U.K. and South Korea fell 5%, 4.6% and 3.5%, respectively, vs. the U.S. dollar.

The $320 billion Stichting Pensioenfonds ABP, Heerlen, Netherlands, held onto its No. 3 ranking, while South Korea's $314 billion National Pension Corp., Seoul, and the $281 billion Federal Retirement Thrift Investment Board, Washington, remained No. 4 and No. 5 respectively. 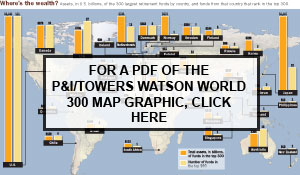 While membership of the top 20 ranking was unchanged from the previous year, there was some movement within the group. Singapore's $160 billion Central Provident Fund grew by $15 billion in 2011, a 10.3% rise, which bumped it up two spots to No. 8 on the list, while the $150 billion Pensioenfonds Zorg en Welzijn, Zeist, Netherlands, added $17.5 billion in assets, a 13.1% increase, and climbed two spots to No. 11. Meanwhile, assets in U.S. dollars at South Africa's $112 billion Government Employees Pension Fund, Pretoria, fell $16 billion, or 12.6%, and dragged the GEPF down five spots to No. 20.

The top 20 funds grew by 2%, similar to that of the entire list of 300. The weighted average asset allocation of the top 20 funds was 50% bonds, 34% equities and the rest alternatives and cash; the bond allocation remained constant, while equities slipped by three percentage points in the year.

Mergers created some new funds for the year, such as the $25.7 billion Indiana Public Retirement fund, at No. 122 on the list, and Mexico's $234 billion Afore XXI-Banorte fund, at No. 139. The Indiana fund was created by the July 1, 2011, merger of the Indiana Public Employees' Retirement Fund — ranked 209th last year — and the Indiana State Teachers' Retirement Fund. The Mexican fund was created by the December merger of Afore Banorte Generali and Afore XXI, which was ranked 289th.

On the other side, the Irish government tapped the $20 billion National Pensions Reserve Fund, Dublin, for emergency funding as that country sought a bailout brought on largely by its struggling banks. The fund's assets sank by $11.5 billion, and its ranking fell 62 spots to No. 164.

Combined assets of all sovereign pension funds in the ranking rose $17 billion, or less than 1% in 2011. That compares to a 9.6% increase in assets at sovereign wealth funds, according to the Sovereign Wealth Fund Institute.