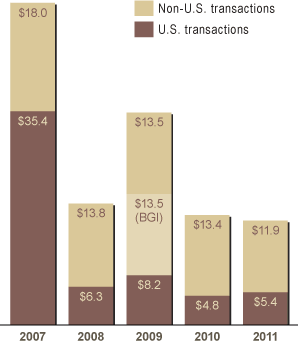 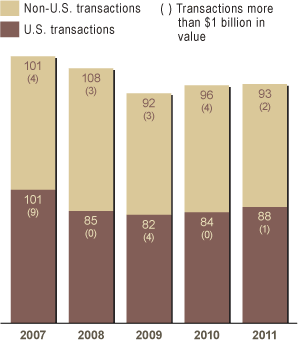 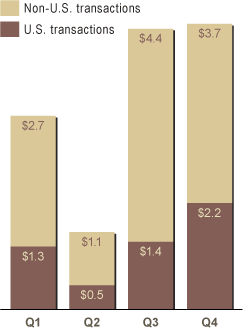 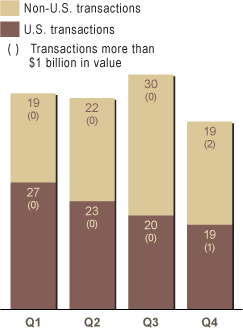 Volatile financial markets hampered deal-making in the industry, leading to another year of depressed activity.

Whether 2012 will be a better year largely will depend on whether the economy stabilizes and spurs new transactions, according to M&A specialists.

One continuing trend that could create new activity, even without economic improvement, they noted, is banks being forced to divest money management units to raise cash and meet tighter regulatory constraints. In fact, one potential deal in 2012 could be bigger than any of the transactions in 2011 in terms of deal value. Deutsche Bank Group is shopping its Deutsche Asset Management unit, with $730 billion in assets under management, and has set a price tag of around $2 billion.

2011 started out with markets performing well, fueling hopes that it would be a strong year for M&A activity.

It didn't turn out that way.

U.S. deals and transaction totals in 2011 were up slightly from the previous year, but international activity was down, according to the Cambridge report.

The report found 88 announced deals involving the acquisition of U.S.-based money managers in 201l, with an aggregate transactional value of $5.4 billion. That compared with 84 deals and $4.8 billion in 2010. Deals involving the acquisition of non-U.S. asset managers in 2011 totaled 93 compared with 96 in 2010. The transactional value of those deals amounted to $11.9 billion in 2011, down from $13.4 billion a year earlier. (The Cambridge report includes only transactions in which money management operations account for more than 50% of an acquired firm's revenue.)

Seven of the top 10 money manager transactions in 2011 were outside the U.S., the Cambridge report noted.

It was also the second year in a row Cambridge noted that the aggregate transactional value of non-U.S. deals was more than double those of U.S. transactions.

The market turmoil for the last six months of 2011 was a dominant theme, as behind-the-scenes negotiations to build deals fell apart before they got to the announcement stage, said John Temple, a Cambridge managing director in New York.

“The failure rate was high, “ he said.

The “messy and protracted political negotiations to solve the eurozone debt crisis“ dragged on for the second half of 2011, making dealmakers wary, he added.

It's hard to value a money manager when the markets swing so suddenly and so dramatically, he said.

“There is a lack of confidence in the marketplace,” he said. “Buyers and sellers don't know if the markets will rise 10% or plunge 10%.”

But despite that demand, many deals were not completed because of valuation disagreements, Ms. Yildirim said.

Before the financial crisis, she said, asset manager sales ranged from a low of 10 to 11 times earnings before interest, taxes, depreciation and amortization to a high of 15 EBITDA. More recently, sales have been around seven to eight times EBITDA, a reality that some sellers have not been willing to accept, she said.

“There is a huge gap between buyers and sellers,” Ms. Yildirim said.

Those numbers are still far below $4.7 trillion in 2009, the year BlackRock Inc. acquired Barclays Global Investors, or even 2008, when the total AUM involved in M&A was $1.673 trillion.

The five largest announced transactions in terms of deal value according to Cambridge, were all divestitures from large financial institutions:

Three of the five — KBL, Neuberger Berman and ING Real Estate — also could be characterized as forced sales stemming from the financial crisis, Mr. Temple said.

Belgian bank KBC Group had been trying to sell KBL European Private Bankers for two years as part of a restructuring plan mandated by the European Commission in exchange for government aid to shore up its assets. A deal announced in 2010 to sell the unit to Mumbai, India-based Hinduja Group fell apart in March 2011 when it did not receive regulatory approval.

The sale of Neuberger Berman stems from the Lehman Brothers bankruptcy in September 2008 and ING Group sold its global real estate businesses, including ING Real Estate, as part of the firm's broader restructuring plan following a Dutch government bailout during the financial crisis of 2008.

Mr. Temple said one significant difference in 2011 from the previous year was that three of the top 10 deals involved management buyouts, but without funding from private equity partners.

He said the ability of the management teams to raise debt to complete the three deals — Neuberger Berman; London-based Mondrian Investments Partners Ltd.'s $775.9 million buyback of a 27% stake held by private equity firm Hellman & Friedman; and London-based BlueCrest Capital Management LLP's buyback of Man Group PLC's 26% interest in the firm for $633 million — was indicative of an improvement in the lending environment since the credit crunch.

Another possible deal, he said, involves Dexia SA, the French-Belgian banking group, which is seeking buyers for some of its operations — including its Dexia Asset Management unit — after government bailouts.

Cambridge's Mr. Temple said that ultimately, more confidence is needed in the economic outlook for the stock market to rise on a longer-term basis, creating the foundation for more M&A activity.

While the U.S. economy has shown some resilience, Europe's sovereign debt crisis still remains a problem as well as slower growth in China and other emerging markets.

“The question is how it all balances out,” he said.

Small deals were big story in '10

Dexia AM sale won't be a slam-dunk