The world's largest 300 retirement funds grew 10.9% in 2010 to a record $12.5 trillion, according to an annual survey conducted by Pensions & Investments and Towers Watson & Co.

But the streak may be short-lived. Resurgence of volatility and attenuation of even meager economic growth in developed markets in 2011 have dimmed hopes for strong equity returns this year, said Carl Hess, global head of investments at Towers Watson in New York.

“It's hard to see China pick up the entire world and carry it on its shoulders,” he said, referring to global growth. 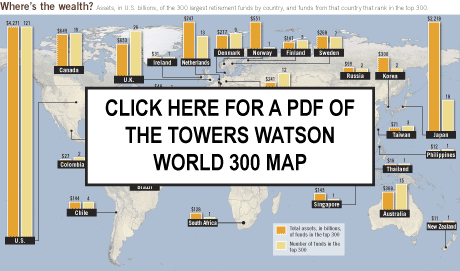 Still, retirement assets in emerging markets are surging in contrast to the tepid growth in the U.S. In the five years ended Dec. 31, among top 20 funds, assets in China's single fund on the list grew an annualized 33.4% in local currency terms.

After factoring currency improvements vs. the U.S. dollar, the Chinese fund, the $129.8 billion National Social Security Fund, Beijing, grew a staggering 38.9% each of the last five years.

And China wasn't alone. Top 20 funds in Malaysia, Singapore and Korea grew an annualized 15.5%, 15% and 6.2%, respectively, vs. 3.1% annualized growth in the U.S. for the period. Among funds on the entire list, those in the Asia-Pacific region grew an annualized 9.1% vs. 0.9% for those in North America.

“The continued shift to the East is hard not to see,” Mr. Hess said. “I'd be surprised if we're not saying the same thing in a year.” The Asia-Pacific region accounted for about half of the nearly $5 trillion held by the top 20 funds, the survey found.

Funds in other emerging regions have also seen strong growth. For example, among all funds on the list, assets in Mexico grew 14.4% in local currency terms on average each of the last five years, while those in Brazil grew 14.3% during the same period.

Because the list is kept in U.S. dollar figures, funds in commodity-exporting nations such as Australia and Canada, as well as many Asian economies, have benefited from their currencies appreciating vs. the U.S. dollar. The Japanese yen has appreciated 7.7% on average each of the past five years, while the Brazilian real and Aussie dollar saw 7.1% and 6.9% annualized growth, respectively.

“These are large numbers,” Mr. Hess said. “We're not very keen on many (investments) right now, but the currencies of emerging economies is one that we are ... because they don't have the headwinds of the developed world.”

The Government Pension Investment Fund, Tokyo, once again held the top spot on the list with $1.43 trillion. However, unlike many retirement funds in emerging markets that have a lower percentage of members in retirement, Japanese funds overall declined 6.1% in local currency terms in the five years ended Dec. 31 as they became cash-negative, paying out more than they took in.

Similarly, assets in defined contribution plans rose 12.5% in 2010 vs. 7.6% for defined benefit plans. “Part of that is relative maturity — most of these (DC) funds are not as mature as DB schemes, so they aren't paying out as much in benefits,” Mr. Hess said, adding that DC plans tend to be stocked with more equities than DB plans and therefore outperform in years with stronger equity growth. The MSCI All-Country World index rose 12.1% in 2010.

Five of the top 20 funds expressed some concern about longer life expectancies and the upcoming retirement of baby boomers as potentially destabilizing forces for their plans. “Time is beginning to press, because the economic and demographic factors that demand changes to our pension system will not wait,” Hans Alders, chairman of the $133 billion Pensioenfonds Zorg en Welzijn, Zeist, Netherlands, told Towers Watson.

The $319 billion Stichting Pensioenfonds ABP, Heerlen, Netherlands, claimed the No. 3 spot, helped by a euro that has strengthened 2.4% on average each of the past five years. Korea's $289 billion National Pension Corp., Seoul, and the $264 billion Federal Retirement Thrift Investment Board, Washington, rounded out the top five.

General Motors Co., Detroit, fell out of the top 20 to rank 22nd with $102 billion in combined DB and DC assets, while Ontario Teachers' Pension Plan, Toronto, took over the No. 20 ranking with $108 billion in retirement assets.

The weighted average asset allocation for the top 20 funds was 50% bonds, 37% equities and the rest alternatives and cash. That reflects high bond allocations by Japan's GPIF and other Asia-Pacific funds, where the average bond allocation was 67%. North American funds, meanwhile, invested more than half their assets in equities.

Among all funds, public-sector retirement plans constituted 39% of total assets, followed by sovereign wealth funds, 29%, corporate plans, 19% and industry-based plans, 13%. When viewed in terms of average asset size per fund, sovereign funds were the largest, with an average $141 billion of assets per fund, followed by public funds, $43 billion; industry plans, $27 billion; and corporate plans, $23 billion.

Graphic: Assets of the Towers Watson World 300 by country